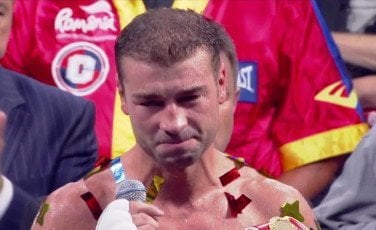 Pascal is getting Bute at the right time of his career with Bute having been stopped in the 5th round by Carl Froch in May of 2012, and having problems beating Denis Grachev in November of 2012. Bute didn’t look good in the Grachev fight, as he made what should have been an easy fight into a very tough one by fighting so timidly. This allowed Grachev to stick around the entire fight and nail Bute with some big shots. Bute didn’t fight at all in 2013 due to a hand injury to his left hand. He was supposed to have fought Pascal last year, but the hand injury caused the fight to be postponed until this Saturday.

Bute doesn’t look like the same fighter he once was, and it’s hard to picture a positive outcome for him in this fight. In his loss to Froch, Bute was overwhelmed with power shots early in the fight and was blasted out in the 5th. Pascal might attempt to do the same thing if he’s unable to have success boxing Bute. Pascal is going to have to be careful because Bute is a very good body puncher, and he could take him out with a shot at any time in this fight if he lands with something hard.

Despite his inactivity, Pascal says he still sees himself as the best fighter in the 175 lb. division. That’s very difficult to take Pascal seriously anymore now that he’s no longer fighting frequent and with the emergence of Adonis Stevenson and Sergey Kovalev. You would have to favor both of those fighters over Pascal if he were to fight either of them in the future.

Also on the card will be light heavyweight contender Eleider Alvarez facing replacement opponent Andrew Gardiner in a scheduled 10 round fight. Alvarez was supposed to be fighting Thomas Oosthuizen, but he suffered an injury in a motorcycle accident and had to pull out of the fight. Undefeated heavyweight contender Mike Perez will be facing slugger Calos Takam in a 10 round fight. This is a fight that Perez should win without any problems as long as he didn’t lose anything from the punishment he took in his war against Magomed Absusalamov last November. Bantamweight Sebastien Gauthier will be fighting Javier Franco in an 8 round fight. Also on he card is unbeaten welterweight Mikael Zewski fighting Krzysztof Szot in an 8 round fight.