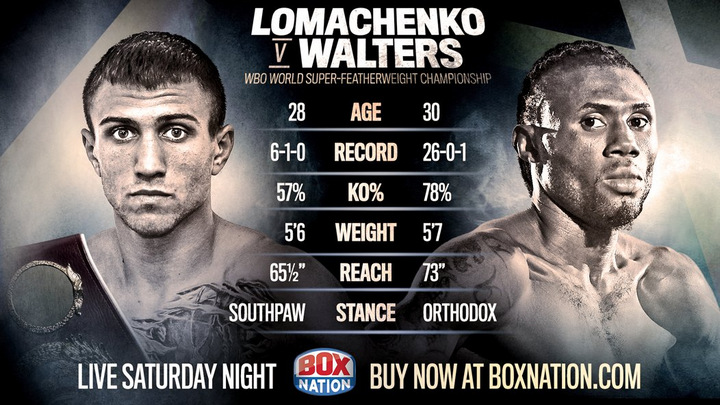 Pound-for-pound star expects a very difficult night’s work when he steps in against the formidable Nicholas Walters.

The pair clash this Saturday, in what is one of the year’s most eagerly anticipated bouts, leading a stunning triple-header on BoxNation which also sees Terry Flanagan defend his WBO lightweight world title against Orlando Cruz earlier in the day, with Bradley Skeete and John Thain doing battle for the British welterweight title exclusively live tonight.

Super-featherweight world champion Lomachenko has constantly looked to test himself against the very best since turning professional in 2013 and against the undefeated Walters he is expecting to see out an early blitz before stopping the former WBA Super champion.

“I think it is going to be very, very hard for me in the first four rounds, then after that I will be trying to terminate the bout,” said Lomachenko.

“This is a very important bout for me because many boxing experts and many people in boxing rank Walters as the highest-rated fighter in our division.

‘Axe Man’ Walters is among the hard-hitters around, with 21 knockouts in his 26 wins, including impressive stoppages over Nonito Donaire and Vic Darchinyan.

The 30-year-old Jamaican, who has not fought in nearly a year, is undaunted at going in against Lomachenko, a two-weight world champion after just seven bouts, the second of which was a split decision loss to Orlando Salido, something Walters wants to exploit.

“As a fighter I have always been in the gym working out so the layoff wouldn’t even bother me and I wouldn’t take the fight if I thought I wasn’t going to be ready,“ said Walters.

“I don’t think this is a different Lomachenko from the guy that lost to Salido – he is the same Lomachenko. They say a leopard cannot change his spots right?

“Since he did lose to Salido, he can be as technical as he wants, but I am in the hurt business – this is a gladiator sport and I fight all of my fights like that, I fight like a gladiator.

“He can come in with his technical fight on Saturday and I am going to be up for it and put on a helluva show on Saturday night,” Walters said.

BoxNation is crammed with live fight action starting tonight when 29-year-old Skeete looks to advance his claim as one of Britain’s best 147-pounders when he faces Edinburgh fighter Thain for the British title at The Brentwood Centre in Essex.

Saturday night will see the return of lightweight world champion ‘Turbo’ Flanagan as he defends his title against Puerto Rican hotshot Cruz, with the Manchester boxer hoping to put on a show at the Motorpoint Arena in Cardiff.

Unbeaten Liam Williams will be up against Hungarian Gabor Gorbics for the vacant WBO European super-welterweight title, with the skilled and undefeated Tommy Langford sharing the ring with Sam Sheedy for the British middleweight title.

Using the code ‘BlackFriday’ new BoxNation subscribers on the Sky platform will be able to join the channel with no registration fee up until midnight on Saturday 26th November.

‘The Channel of Champions’ has an incredible lineup of live fights coming up including lightweight superstar Terrence Crawford v John Molina and the final fight of the legendary Bernard Hopkins who challenges Joe Smith Jr next month.