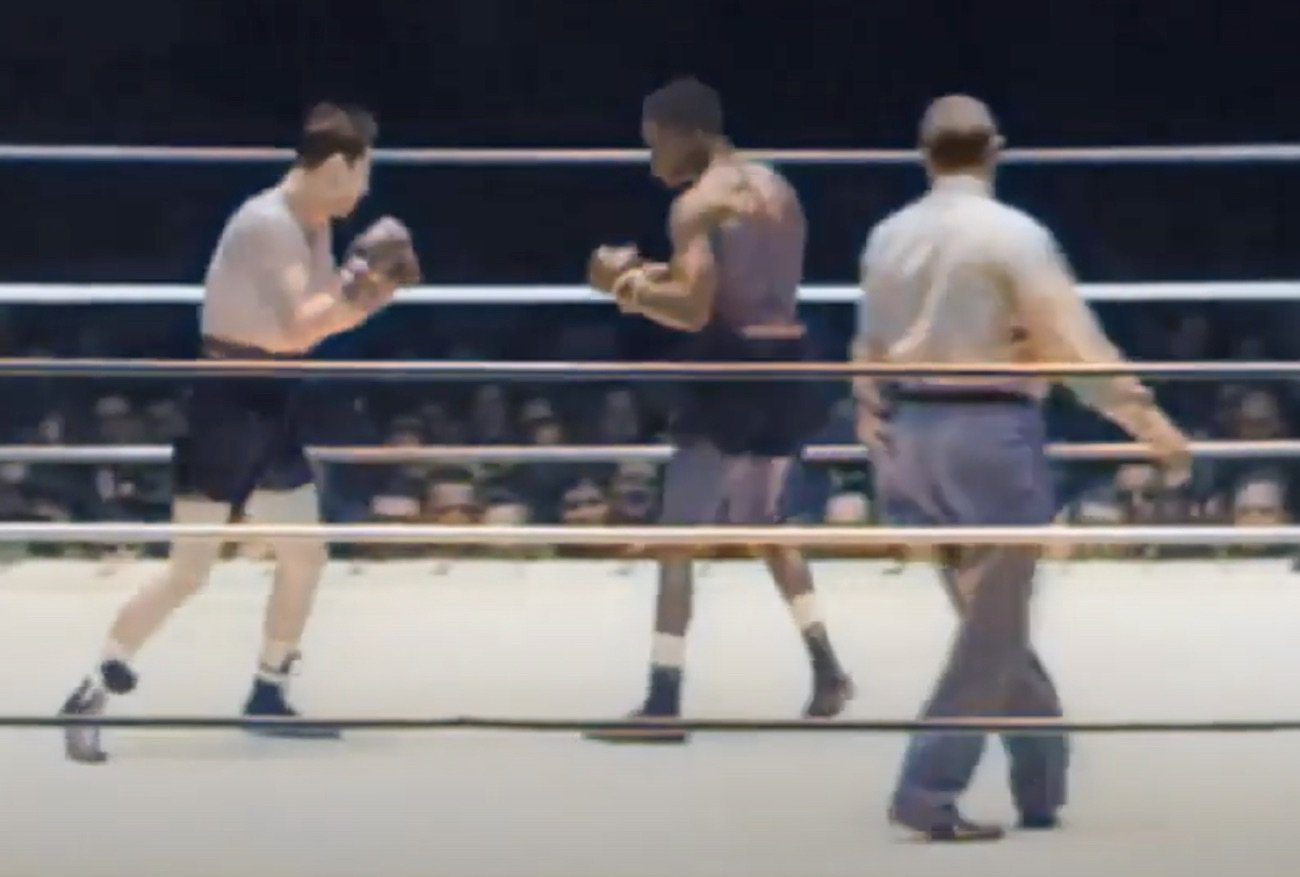 “He could have played piano with boxing gloves on”, said a ringside reporter as quoted in Bert Sugar’s Boxing’s Greatest Fighters.

“Ike was more than a world class fighter to me. Ike was a mythic. Ike was quite simply, with apologies to Benny Leonard, Henry Armstrong, Lew Jenkins, Beau Jack, Jimmy Carter, Bob Montgomery and even Roberto Duran, the best lightweight fighter who ever lived”. Bill Kelly: The History of the Sweet Science.

Unfortunately, Ike Williams’ heyday (1940-1955) coincided with an era when The Mob had their hooks into countless fighters; and to advance one’s career the wise guys often demanded a significant cut of the action. Nevertheless, Ike Williams could hold his head up high for never yielding to the temptation of throwing a fight.

Standing 5’9’’, Isaiah “Ike” Williams was a natural lightweight but often fought opponents well above 135 pounds. It was an era when fighters routinely fought in different weight classes.

Ike got matched with tough opposition from his pro debut at only 17-years old, yet still managed to win 13 of his first 18 fights between March 1940 and November 1941 – with two losses being quickly avenged. His January 1943 debut at Madison Square Gardens was a decision over Jerry Moore. During all of 1942 and 1943, Williams notched a perfect 34-win streak (16 by the knockout route). It established him as one of the most dominant boxers around.

Then he hit a roadblock on his first fight of 1944, when he got pounded into submission and fell three times in the 12th round to Bob Montgomery before the ref halted proceedings. Williams used it as a learning experience and continued with his winning ways on 16 different occasions in 1944 – with the only blemish being a split decision loss to the gazelle-like Willie Joyce.

Williams won the world lightweight title in 1945 and did it the hard way, entering the champ’s home turf of Mexico City and besting Juan Zurita (130-22-1) via 2nd round TKO. Ike performed the feat at only 21- years old, making him one of the youngest boxers to ever win a world crown. Two 1946 title matches saw Williams vanquishing Enrique Bolanos (37-6-2) via 4th round TKO at Wrigley Field LA; while later that year he travelled to Cardiff Wales and KO’d the highly-experienced Ronnie James (111-15-5) who hit the canvas 7 times during the brutal beatdown before receiving the 10-count in the 9th.

Ike would fight 20 times in 1946-47 and packed all the top boxing palaces and arenas right across the land: a testament to his drawing power. Ike gave the fans tremendous action and usually managed the win without the judges taking matters into their hands.

Williams’ reign as lightweight champ would be one of the longest in boxing history.

1947 marked the pinnacle of Ike’s career as he avenged that humiliating 1944 loss to Bob Montgomery, while unifying the lightweight crown at Philadelphia’s Municipal stadium. Montgomery was knocked down for a nine count in the 6th and the ref soon stepped in to halt the constant bombardment. Montgomery – often ranked as one of the top 5 lightweights in history – had captured the NYSAC version of the lightweight crown on 3 different occasions between 1943 and 1947.

1948 marks the year which firmly established Williams as an all-time great. He vanquished the cream of the opposition: Beau Jack, Kid Gavilan, Enrique Bolanos (4th round KO), Freddie Dawson, Jesse Flores ( 10th round stoppage), Vince Turpin, Livio Minelli, Rudy Cruz and Buddy Garcia. His scraps were always action packed which made him a fan favorite. One of the most skilled pugilists ever, Ike’s punching power was devastating.

He was named both The Ring Magazine and The Boxing Writers Association of America fighter of the year for 1948.

In 1949, Ike fought monthly and got the victory except for two extremely close losses in non-title bouts at MSG to the legendary Kid Gavilan. Both bouts Ike fought at 136 pounds – ten less than Gavilan who was a natural welterweight. On 21st July 1949 with Jack Dempsey as referee and many Hollywood stars gathered ringside, Williams was offered big loot to throw the first Gavilan bout but declined. Tellingly, he got robbed of the decision according to many ringside onlookers including Sugar Ray Robinson.

Williams produced one of his finest performance by knocking out former foe Enrique Bolanos in four on July 1949 at LA’s Wrigley Field. A year earlier, Ike “allowed” Bolanos to hang around for the full 15 rounds. The fight grapevine also mentioned Ike’s fight against Johnny Bratton as one he was intended to tank, but ignored the offer and went on to win a unanimous 15-round decision.

Two close points losses in late 1950 heralded a slow decline in Ike’s fortunes, albeit he still faced the best fighters in both the light and welterweight divisions: Gil Turner and Chuck Davey (both undefeated at the time), Carmen Basilio, Don Williams, and Jimmy Carter (85-31-9) against whom Ike lost the title via 14th round TKO in May 1951 at MSG. The title loss was portended when Ike barely outpointed Fitzie Pruden (51-23-0) April 11,1951 at Chicago stadium in a welterweight contest. Two months earlier, the Canadian pugilist had established his credentials with an upset points win over the highly-regarded Tony Janiro at MSG.

After 1953, Ike Williams would only fight three more times, with the last two against Beau Jack. It’s noteworthy that when Williams caused Beau Jack (91-24-5) to retire atop his stool after 8 rounds in August 1955, it marked the final bout of both warriors’ careers.

The second of those four Beau Jack/Ike Williams fights will always be remembered for that dramatic moment when – as punch after punch thudded into the unprotected jaw of BJ while driving him into a corner – Williams turned to the referee for a merciful stop to what had become a one-sided affair. The third man did eventually intervene, although the hard-as-nails Jack would have continued enduring the onslaught.

This combination of ferocity and passion had turned Williams into a natural crowd pleaser and fan favorite.

Here’s how the wise guys got their chance to bleed Williams dry:

By 1946, Ike’s manager Connie McCarthy’s chronic alcoholism made him a pariah that could no longer be tolerated. Williams wanted to self-manage but the Managers’ Guild put the kibosh on that idea. Ike faced the dire prospect of being blacklisted from the game. That’s when notorious Mafia godfather Frankie Carbo signed Williams to one of his “contracts” which included being overseen by understudy Blinkie Palermo. Offers to throw fights were constantly rebuffed by Williams.

Ike left boxing with a sparkling record of 127-24-5 that included 66 wins via KO. Over his 16-year career Williams fought at weights ranging from 131 to 154 pounds. In today’s era he would’ve been a multi-weight champion. Had Williams been born 25 years later, he would be far better known today and received far better guidance.

With better guidance and management, he also would’ve been featured in many multi-million dollar PPVs. But back in Ike’s heyday, nobody was serious about looking into the shady side of a fight game where boxers were often treated like chattel.