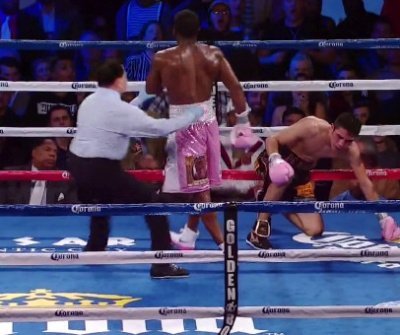 Even when that happens, a good fighter knows when he is in the danger zone, he needs to do one or more of several things. If he’s within his range, he should be throwing punches. Along with that he should avoid admiring his work, change angles, move. If caught in front, he had better have his head positioned correctly to protect himself from shots (uppercuts), or be moving his head and upper body, and if all else fails, he should clinch or tie his man up, spin him, or move out of range altogether if that’s all that’s available. In other words, get the hell out of there! Good fighters are hardly ever there for a follow up shot after getting nailed with a good one.

DeMarco did none of those things. As the fight progressed, viewers saw Tony bent over, offering himself as a gift to Broner. He would repeatedly get hit with right uppercuts, but made no adjustments. As a result, Broner had a field day. He ripped off more shots, some to the body, and some around DeMarco’s guard. Soon DeMarco’s face took on the look of someone who had been in a headon, possibly hitting the windshield.

His facial expression also told a story, and it was a short one…..There was no hope! Evidently, DeMarco didn’t have a clue. He didn’t know what the hell to do?. By that time, when on the inside (which was much of the time) Broner would simply push and hold his left glove in DeMarco’s face, hoping to obstruct Tony’s vision. Then he would tee off with right hands, and follow with all of the other usual shots……..hooks, shovel hooks and more uppercuts.

It was not a pretty sight. However, the question remains, does Broner’s easy time of it prove he is truly one of the best pound for pound already? The answer is probably not, at least not with this kind of performance by the opposition. As previously mentioned, DeMarco handed this fight to Broner by forgetting everything he knew about boxing. It would be difficult to find a veteran fighter do more things incorrectly. When DeMarco watches film of this fight, his people will undoubtedly look at him with disbelief and say, “What were you thinking? You know better than that!”