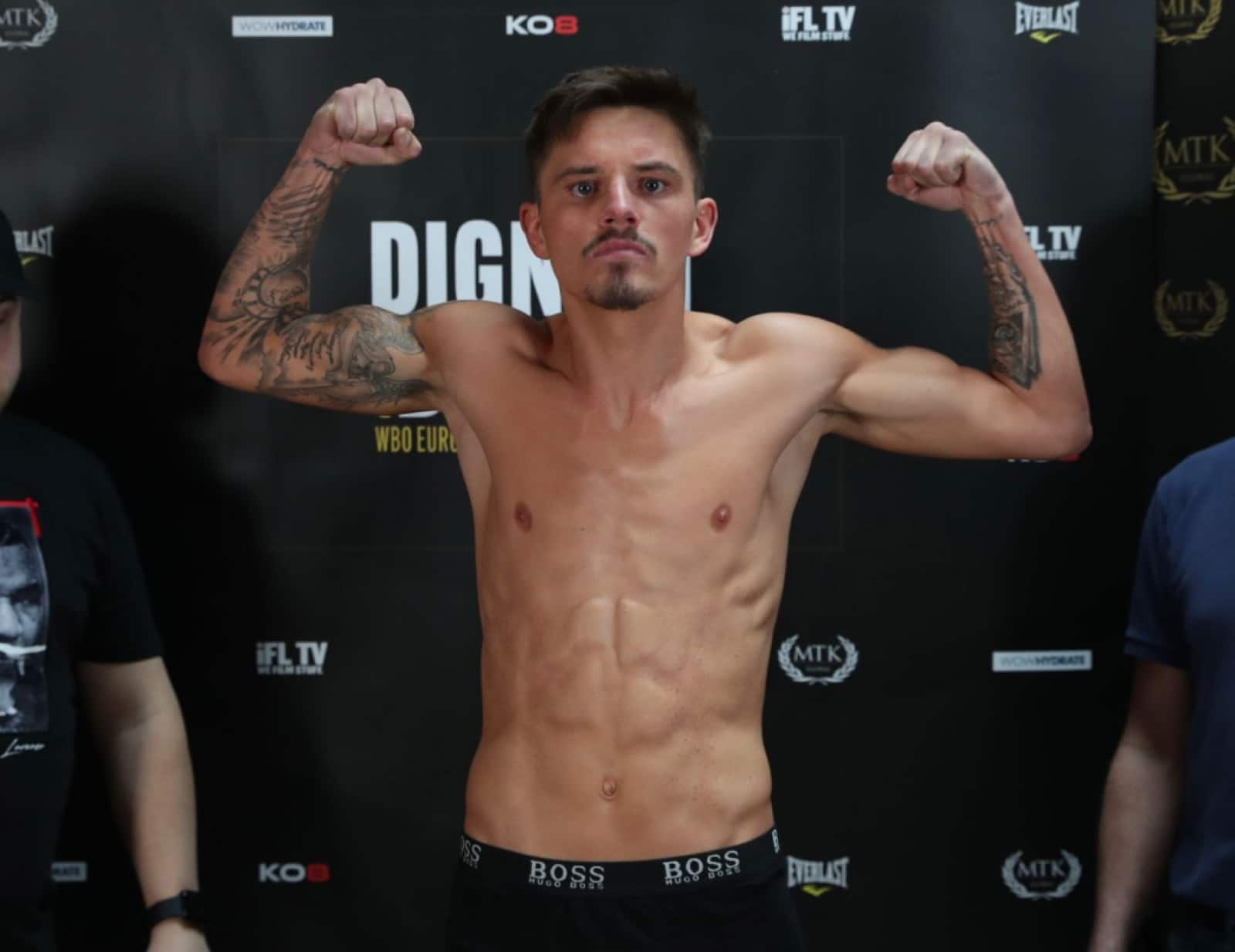 ‘Lightning’ Lee McGregor was held to a draw by Diego ‘El Profeta’ Ruiz at York Hall in a result that was hotly discussed after the fight. Most British observers believed McGregor had done enough to get the victory over 10 rounds against his tough Argentine opponent.

It was McGregor who spent the majority of the fight on the front foot, but stayed in the pocket for too long at times and was caught with heavy counters from the tactically astute Ruiz.

At 25 years old, shooting star McGregor had achieved the rare feat of capturing British, European and Commonwealth titles in his first 10 fights. Scotsman McGregor captured the British belt with a split decision win over then undefeated Ukashir Farooq in 2019, and added European gold with a first round knockout of Karim Guerfi in March of 2021.

Last time out, another undefeated foe was conquered when McGregor stopped former European flyweight champion Vincent Legrand in the first round, a result that lifted McGregor to number 10 in the Ring Magazine Bantamweight rankings.

It had been a troubled buildup to this fight for McGregor, with an originally scheduled bout against Nabek Abgaryan postponed after his father was involved in a life threatening accident. A rematch with Farooq was also discussed before the surprise retirement of his former foe.

McGregor and his team led by head coach Ben Davison made the decision to not cut all the way down to Bantamweight for this fight, citing the reason as the relatively short buildup and not being a championship showdown.

The durable Ruiz had suffered a stoppage defeat once in his career so far when he was beaten in the 9th round by undefeated Irish star Michael Conlan in Belfast. After fighting the first 23 fights of his career in his native Argentina, this would now be the third trip made to the United Kingdom by Ruiz who also dropped a wide points decision to undefeated Shabaz Masoud in England last time out.

Dressed in black and gold shorts, McGregor adopted a high guard and took up position in center-ring, fighting behind the jab while the purple clad Ruiz circled the ropes and threw counter punches in the opening minute.

McGregor got through with two uppercuts while sharp counter hooks from Ruiz were finding the target in a close first round. McGregor backed the Argentine into a corner with an offensive flurry before Ruiz moved in close and suffocated the attack.

Ruiz opened round two by scoring with a three punch salvo before circling the ring as McGregor advanced behind the jab. The Argentinian caught McGregor with a flush left hook before adjusting his guard position and drawing the Scotsman onto the end of counter hooks successfully. After ducking a right hand from McGregor, Ruiz landed a strong counter punch and returned to his corner with his arms raised after a strong round.

Round three opened with McGregor on the front foot as the wily Ruiz appeared comfortable circling the ring and picking his shots on the counter. After McGregor landed two head shots, the Argentine responded with a hook and uppercut as every McGregor blow seemed to be met with a counter shot. The Scot was frozen in his tracks in the final minute of the round with a strong left hook before landing a fizzing punch of his own through the high guard of Ruiz.

Ruiz appeared to be growing in confidence at the start of round four, throwing out a three-punch combination in the center of the ring before backing McGregor onto the ropes with more aggressive forward movement. The fight soon settled back into a more familiar pattern, with an advancing McGregor firing out jabs and straights while Ruiz threw counter shots.

McGregor backed his Argentine foe into a corner and looked to unload but the attack was stalled when referee Kieran McCann stepped in to warn McGregor for a push. A determined McGregor looked to break down his opponent by stepping forward with uppercuts but was absorbing punishment himself with Ruiz landing scoring hooks in response to every punch landed by the Scotsman.

The aggressive McGregor threw out a jab in the opening minute of round five, only for Ruiz to skip out of range before zipping back in with two counter punches. McGregor forced Ruiz into a corner and scored with two body blows before continuing to stalk the Argentine and landed another punishing left hook. Ruiz remained a threat on the counter attack but McGregor was more alert defensively and shipped significantly less punishment in what was a better round.

Ruiz opened round six by twice backing McGregor against the ropes and throwing heavy blows that thudded against the guard of the Scotsman. McGregor returned the favor by walking down the Argentine and swinging a powerful right hook before referee McCann stepped in to separate a clinch.

The work rate of McGregor increased in the final minute of the round, with the Scot firing out jabs and a piercing uppercut while displaying better movement to avoid counter shots.

Round seven opened with McGregor stepping forward and fighting behind the jab before landing a strong one-two combination as Ruiz circled the ropes behind a high guard. McGregor breached the defense of Ruiz with a strong uppercut before bundling the Argentinian into the ropes and forcing a separation from referee McCann.

Both fighters traded punch for punch in an entertaining round eight before McGregor backed Ruiz into a corner and landed a three punch outburst to likely shade the period 10-9 on the scorecards in what was a tight encounter (77-75 McGregor on this author’s scorecard with two rounds remaining).

Ruiz opened round nine in aggressive fashion, throwing out a battery of punches before countering well off the ropes. McGregor was throwing out punches of his own and rocked the Argentine with some heavy hooks as the round progressed. Ruiz smiled behind his guard and continued to tag the Scotsman with counter hooks as the fight headed into the 10th and final round.

The pattern of the fight was a familiar one in round 10, with McGregor pushing forward in straight lines behind the jab while Ruiz cuffed his opponent with hooks on the counter. McGregor rocked back the head of Ruiz with a straight right hand in the final minute, but as had been the case all fight the Argentine soaked up the blow and continued to fight back. A close fight ended in fitting fashion with both fighters trading blows in the center of the ring as the final bell rang.

After the fight, an excited Ruiz mounted the ropes and celebrated with his corner believing he had won the fight, while McGregor raised his arm and circled the ring to acknowledge the crowd.

With both fighters now lined up in the center of the ring, there was gasps in the crowd when the score was announced a 95-95 draw as scored by referee McCann. A frustrated McGregor left the ring without being interviewed, shaking his head with neither fighter seeming thrilled at the outcome in what had been a very entertaining clash.

Most discussion post fight was centered around the result of a fight most observers believed McGregor to have won. Television pundit Spencer Fearon believed the fight should have been a comfortable win for McGregor and questioned whether referee McCann should have been scoring the fight alone without judges in a clash of this magnitude.

While this fight was originally planned as a step on the ladder to a world title shot, the result and performance of Ruiz would likely make a rematch an intriguing option for many fans. It would be interesting to see if McGregor could be less of a target for counter shots and make the defensive alterations needed for a more convincing performance.

If McGregor wants to drop down to bantamweight and look to climb the ladder to a world title shot, Australian former world title challenger Jason Moloney would be a stiff test.

After three trips to the United Kingdom to face a high level of opposition, Ruiz finally registered a result that could see him gain a foothold in the upper echelons of the division. Ruiz would likely be pleased with a rematch with McGregor or challenging a fighter such as Moloney or American Rau’shee Warren in an attempt to crack the divisional top 10 list.