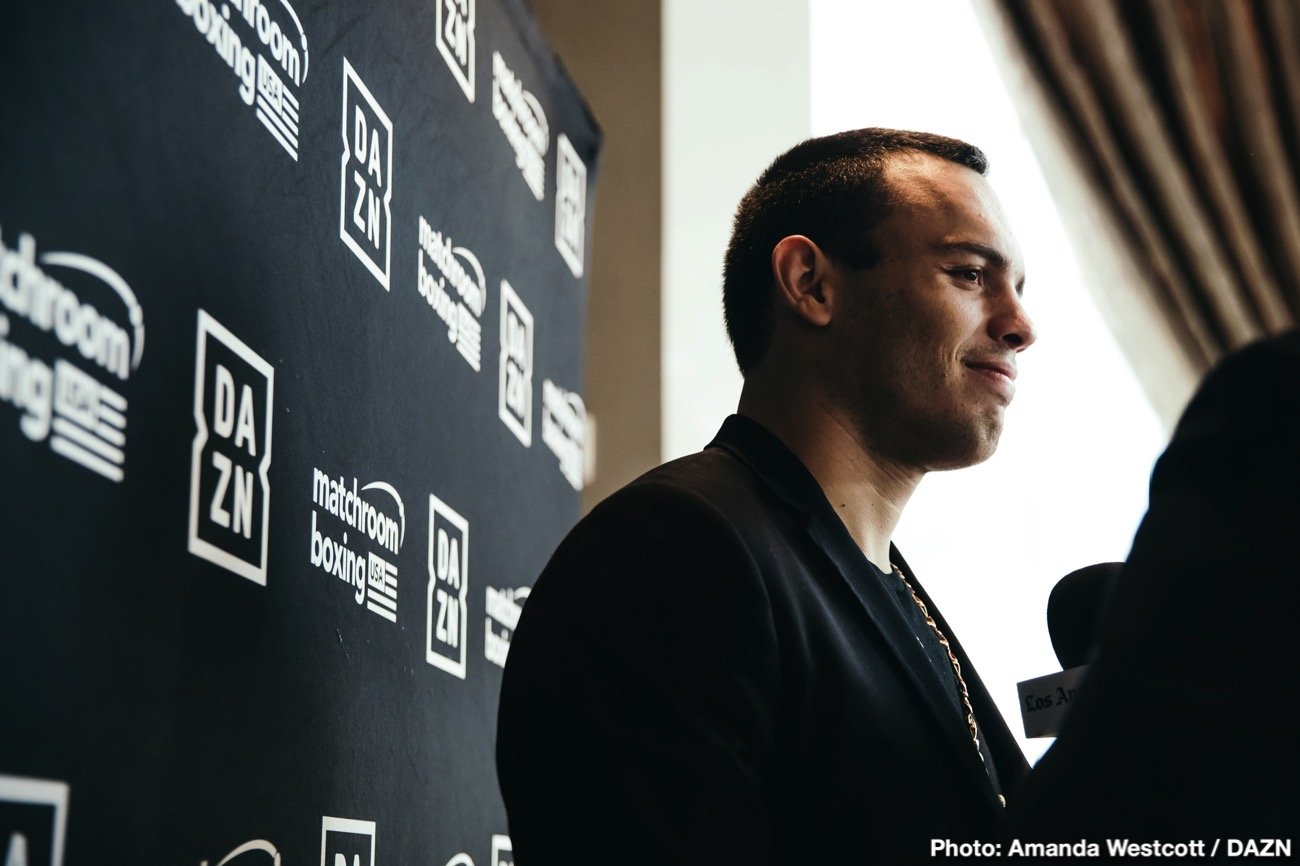 Julio Cesar Chavez Jr.  says he has no issues with being tested by VADA for his December 20th fight against former IBF/WBA middleweight champion Daniel Jacobs at the Talking Stick Resort Arena, in Phoenix, Arizona. Chavez Jr. (53-3-, 33 KOs) not only take the tests by VADA, but he’ll make weight for the fight at 168.

There’s a lot of speculation among boxing fans whether the 33-year-old Chavez Jr. will be able to make the 168-lb limit, but he says he’s definitely going to make weight. He doesn’t want to be fined if he comes over the limit.

Chavez Jr. will be training with Freddie Roach, who is a great trainer that has worked with him and many great fighters in the past. Chavez Jr. wanted to Roach to help him get ready for Jacobs (35-3, 29 KOs), because this is going to be a tough fight. Julio has fought only once in the last two years, and that was against a completely over-matched journeyman Evert Bravo last August. The last TRUE fight Chavez Jr. was against Saul Canelo Alvarez in May 2017.

Chavez Jr. explains why he skipped the drug test

“What happened was I don’t have a license as a boxer, so I don’t know what happened,” said Chavez Jr. “They said I didn’t want to take a test, but for what fight? I hadn’t even made the fight official or it wasn’t announced. So I don’t know. I’ll take a VADA test. Whenever I’m ready to take it, I don’t have a problem doing it. But it has to be logically for something coming up like a fight with my license as a boxer.

“Yeah, I know, but they wanted to make me look bad because of what happened with the test for Sergio Martinez. But honestly know, it’s wrong what they are saying about me. Completely, in everything,” said Chavez Jr. when asked if he’s clean.

There’s still a month to go before Chavez Jr. faces Jacobs on December 20th. If Chavez Jr. agrees to be tested each time VADA comes around, then boxing fans can see that he didn’t try and duck the tests. He’ll still need to test clean, and hopefully no issues like the one that came up for his fight with Sergio Martinez.

Chavez Jr. talks about his decision to fight Jacobs

“I feel mentally very good. I’m training with Freddie Roach, and it’s going to be a hard fight because I’ve been inactive, but the key is in my physical preparation,” said Chavez Jr. to Fighthub. “I don’t know. A lot of stuff happened,” said Chavez when asked why he was inactive for two years following his loss to Saul Canelo Alvarez in 2017. “Contracts just a bunch of stuff, but everything happens for a reason.

Well, because I have experience. I’m old, and I can’t do stuff like when I was young. But I don’t have a lot of time left, really I don’t. They say don’t do things that are bad for you. So we are going to do the best we can with the time I have left in boxing,” said Chavez.

At this point in Chavez’s life, he needs to stay active for him to take advantage of the little time he has left. 33 is an advanced age for most boxers. Although there are some like Gennadiy Golovkin, who is able to fight at a high level in his late 30s, a lot of fighters start deteriorating in their early 30s.

With all the inactivity Chavez has had, he’s hurt his career. He likely only has a couple of years left as a B-side opponent for the elite level fighters. If Chavez Jr. sticks around too long, he’ll no longer be considered usable an opponent. Chavez Jr. was probably only selected by Jacobs due to his last name rather than what he’s done in his career since 2012. Having the famous Chavez last name obviously helps Chavez Jr. get fights that he doesn’t deserve like the match against Jacobs.

Chavez Jr to be trained by Freddie Roach

“Honestly, I don’t care. I’m going to prepare well to win. I don’t care if he sees me as that,” said Chavez. “It doesn’t interest me. I’ve always had a good relationship with Freddie. He’s my friend. Yeah, there were complications in the preparation for Sergio Martinez. But he let me use the gym, and said I can train here with Mr. Rumollo, and I told Him I will train with him, but I need you to help me with this fight.

“So he told me perfect. If you’re here in the gym, I will help you. That’s how we joined up again. Of course, you can’t mess around with Freddie, and I will train 100 percent. And I start officially with him on Monday, and I will finish with him also,” said Chavez Jr.

It’s unknown how much of an impact trainer Freddie Roach will have in helping Chavez Jr. get ready for the Jacobs fight. It’s such a mismatch in talent before them, that it might not matter that Roach is helping Chavez Jr. For him to beat Jacobs, he’ll need to fight to follow Roach’s instructions to the letter. Chavez’s body punching ability will give him a shot at winning by knockout, but it’s still unlikely to happen.

“Well, he looked really good. Canelo looked stronger than Sergey Kovalev with a better strategy,” said Chavez in analyzing the Canelo Alvarez vs. Sergey Kovalev fight. “I think weight had a lot to do with it.

“Rehydration affected Kovalev, and Canelo is a better boxer than him, but the weight didn’t help Kovalev. Yes, I always make weight because I have to. They fine me way too much money. So I will make it again,” said Chavez Jr.

Chavez Jr. is just guessing what happened with Sergey Kovalev in the Canelo fight. A lot of boxing fans think Kovalev intentionally took it easy on Canelo out of gratitude for being given the fight. We’ll know for sure why Kovalev looked so weak, and didn’t attack Canelo like he’d done his previous 38 opponents. Obviously, when a knockout artist suddenly lightens up on his punches after an entire career, it’s a red flag that something is going on.

Jacobs sees Chavez as comeback fight for both

“It’s a great fight, and a good comeback fight for both of us,” said Jacobs to Fighthype about his December 20 match against Chavez Jr. “It’s an opportunity to display my skills in another weight class, and it’s another chapter for me. I won’t say it’s an easy night because boxing is so unpredictable. You can never say it’s an easy night, but I am expecting a fewer challenges than maybe someone like Golovkin or Canelo.

“It’s always what I wanted. The only time I didn’t all for big fights is when I came back from cancer, and it was definitely understandable. I wanted to take my time and climb the ladder with the perfect opponent. But ever since then, I’ve been fighting guys back to back undefeated,” said Jacobs. “I fought four or five undefeated fighters back to back, and former champs. I’ve been in there with the best of them, and I’m continuing that,” said Jacobs.

Jacobs lost his last fight to Canelo, and he’s motivated to bounce back from the defeat against Chavez. Daniel thinks he’ll have fewer challenges against Chavez Jr. than he did in his fights against Canelo and Golovkin. If Chavez fights like he did against Bravo, Jacobs might have more challenges than he’s planning for.

Being at 168 will give Jacobs more energy

“We don’t run and we never will,” said Jacobs. “And we got to continue that motto until I hang the gloves up. Once it’s all said and done, they’re going to respect the work that I’ve put in the game, and that’s what I’m shooting for. Eight pounds is a lot. I think you can expect a stronger mentally, and clarity is going to be a lot better.

“When you’re losing weight, it does more to you mentally. To have a clean mind to knowing I can do everything I see in there, and not see it but react to it or see it but be too slow or too weak to be able to do it. I see a lot inside the ring, but it’s all about how I feel to take advantage of those situations. 168 pounds will give me those opportunities to feel good,” said Jacobs.

With the move up to 168, Jacobs believes he’s going to have more energy to take advantage of the things he sees inside the ring. He feels that he didn’t have that when he fought at 160, because he was working so hard to make the weight. The Chavez fight will be a good test of whether Jacobs is stronger in that weight division or the same guy that lost to Canelo and Gennadiy Golovkin.

“I’ve always been one to fight different fighters from different networks, and make it work,” said Jacobs. “I’ve never been one to just let boxing take control of my career. So I do feel those fights will be an opportunity in the future. You’ve got a guy across the ring that wants to hurt you. So if you’re not ready, you’re going to get hurt. So that’s the only motivation I need.

“Boxing is a kill or be killed sport, and it’s unforgiving. So it’s more of a personal thing, and not a motivational factor, because I’m going to be motivated every time I go in the ring. That’s not an issue for me. I love to please my fans, and I love to perfect my craft. When I’m on, and my combinations are flowing, I love that. I’m a fan of myself too. I’m going to give 100%. It’s not the drive. I think it’s more so understanding that boxing doesn’t love you,” said Jacobs.

You can’t overlook a puncher like Chavez Jr. because he’s still dangerous when he’s going to the body. Jacobs can’t afford to get careless with Chavez, because he’s got a lot of power when he’s not weight drained like he was against Canelo Alvarez.

Jacobs expects to get big paydays in the future

“I’ve been having good paydays before Canelo, but that was a good payday. Why not? What are we working for?” said Jacobs when asked if he’s looking to get other big paydays like the one he got against Canelo Alvarez. “And what do we all have jobs for, in order to provide for our families.

“You’re always going to want more. If you have an opportunity to get more, then why not. So whatever accolades I can accomplish in this journey, I’m going to try and grab it as much as I can,” said Jacobs. “Great accomplishment,” said Jacobs when asked about his thoughts on Canelo beating Sergey Kovalev. “

Jacobs likely will get good paydays in the future, but they probably won’t be anywhere close to what he got in his fight against Canelo Alvarez earlier this year. The fact that Jacobs is now fighting at 168 means that he’s got limited options for payday fights. The only way Jacobs can get another big payday is if he wins a couple of belts at 168, and Canelo decides he wants to fight him again to take his straps.

Jacobs would have his hands full against WBC super middleweight champion David Benavidez or WBC Super World champion Callum Plant. WBO champion Billy Joe Saunders is the lowest hanging fruit among the 168-b champions. He won’t be a big payday for Jacobs.