Undefeated Joshua Buatsi (16-0, 13 KOs) beat Craig Richards by a narrow 12-round unanimous decision in an exciting war on Saturday night in a WBA light heavyweight title eliminator at the O2 Arena in London, England.

Both fighters were landing tremendous bombs in each round in a seesaw battle, but the 2016 Olympian Buatsi was just a little bit busier than the heavy-handed Richards. Buatsi was hurt in the eighth round after Richards landed a textbook right uppercut to the head.

You couldn’t throw it any better than Richards, and it instantly had Buatsi on shaky legs, causing him to hold for the remainder of the round.

Richards hit Buatsi with everything but the kitchen sink in trying to finish him, but he couldn’t get the right shot to get the knockout.

The fight was arguably decided by Buatsi’s early work, as he took advantage of Richards’ slow start in the first five rounds to build up a lead.

It was a similar type of fight as Richards’ clash last year in May against WBA 175-lb champion Dmitry Bivol in which he started slow and then controlled most of the final six rounds.

In tonight’s fight, Buatsi fought well enough in the championship rounds to get a slight edge in rounds 11 and 12.

After the fight, Matchroom Boxing promoter Eddie Hearn said that he would like to have Buatsi challenge WBA light heavyweight champion Bivol (20-0, 11 KOs) next, provided Canelo Alvarez doesn’t trigger the rematch clause that he has from their fight on May 7th.

Hearn says he’d like to see a rematch between Buatsi and Richards at some point. That would be another incredible fight, especially if Richards starts faster with his offense.

In undercard results, Alen ‘The Savage’ Babic (11-0, 10 KOs) kept his perfect record intact with an exciting 10-round unanimous decision over Adam Balski (16-2, 9 KOs) to win the WBC silver bridgerweight title.

Balski landed a short left hook to the head in the early going of the first round that put Babic on the canvas. It was more of a flash knockdown than anything. The Polish fighter Balski was catching Babic with that short left hook the entire fight, but he took them well.

At the end of the ninth round, Balski landed a nice right to the head that had Babic totally hurt, staggering around. Unfortunately for Balski, the shot came after the bell, and it cost him a point deduction. 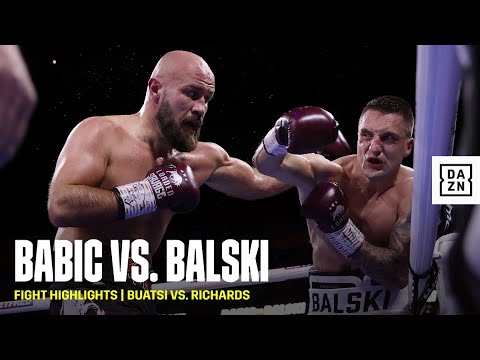 Had that punch landed during the middle of the round, Balski likely would have finished Babic because he was out on his feet and defenseless.