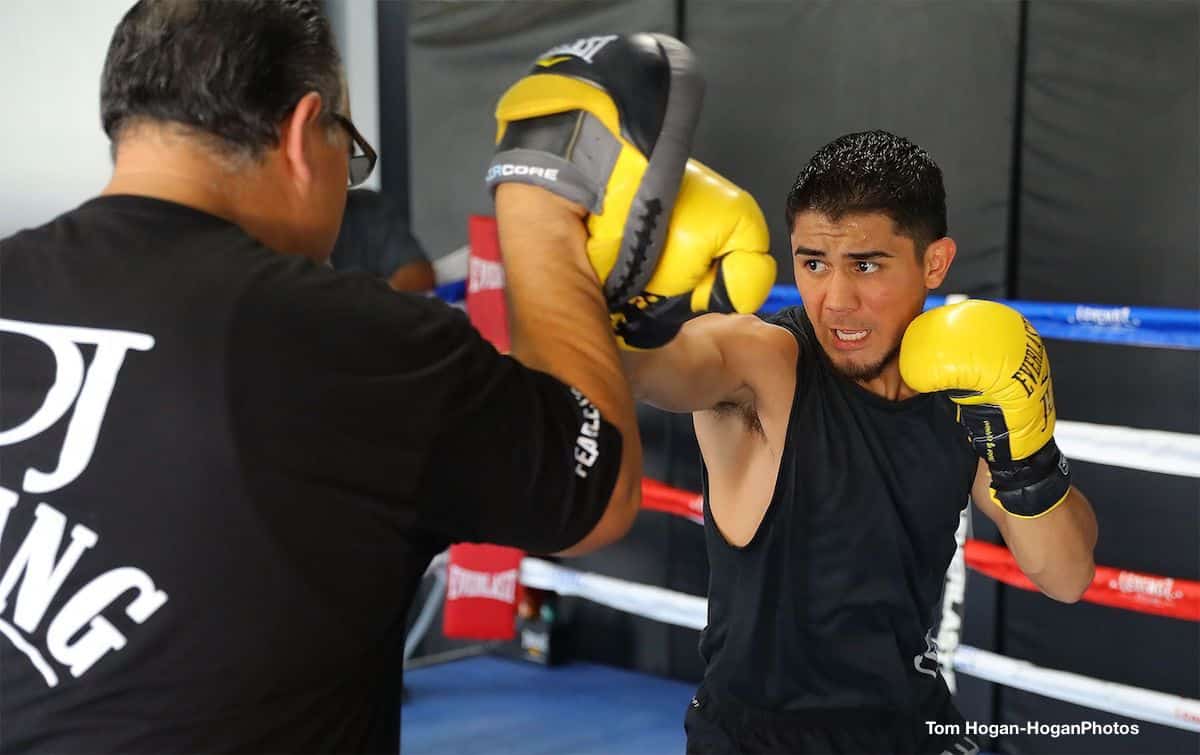 Joseph “JoJo” Diaz Jr. (26-1, 14 KOs) hosted a media workout today at Legendz Boxing in Norwalk, Calif. in preparation for his battle for the WBA Featherweight World Title currently held by Puerto Rican warrior Jesus Rojas (16-1-2, 19 KOs) in the inaugural edition of Golden Boy Fight Night on Saturday, Aug. 11. The 12-round battle will be Diaz, Jr.’s second opportunity at a world title in the stacked featherweight division.

Here’s what the fighters had to say at today’s media workout:

JOSEPH “JOJO” DIAZ JR., Featherweight Contender:
“Everyone was there during the Gary Russell Jr. fight. Oscar De La Hoya, my family and my team was there. There was no pressure. I just knew that it was the opportunity I had been waiting for my entire career. I knew I had to get it done. I knew it was in his hometown and that there were going to be a lot of his fans cheering him on. Unfortunately, I didn’t come out on top. I’ve watched the tape about 100 times. I looked at all the mistakes I made. I saw that if I would have just been more aggressive, started off earlier and used my jab that the outcome would have been different. I would be world champion right now. Things didn’t go as planned, but it was a lesson learned. I have the opportunity to fight for a world title again, and I can’t let this opportunity get past me. I’ve been training my butt off, and I’m going to walk away with the title around my waist.

Right now, I have a whole different mindset. We have a whole different training camp. On August 11, I will become world champion. Jesus Rojas is a dangerous fighter. He’s coming off two great wins and stopped both of them. He constantly applies pressure and has great conditioning. He’s going to keep on coming forward. My father and I know what he’s capable of and what he’s going to do. We’re working on my conditioning so that I do not get tired and so that I can be very active, throw a lot of shots and engage when he engages. It’s going to be an action-packed fight.”

JONATHAN “THUNDER” NAVARRO, Super Lightweight Prospect:
“This is going to be a tough fight for both of us, but me being a natural 140-pounder will be a factor. 140 pounds is the normal weight I fight at, and Damon Allen Jr. will be moving up from 135 pounds. Even though that’s only five pounds, that’s a lot in the sport of boxing, especially when you’re the smaller fighter. What makes Damon Allen a dangerous opponent is his speed and movement. To me, that’s all I see, and it’s not going to be a big deal. This fight will be a crossroads fight because we are both undefeated prospects. It’s going to be a hard fight. We’re going to give the fans a great fight. When we got word of this fight, I never hesitated to take it. The moment they told me his name I got happy because I know it will be an important fight. It excited me and made me want to train even harder. Not many young prospects get to showcase their talent against another fellow prospect this early in their career.”

FERDINAND KEROBYAN, Super Welterweight Prospect:
“I wouldn’t say I look for the knockout. But when the knockout presents itself, I never let back and give it my all to give the fans an exciting fight. I’ve been focusing on everything. I’ve been working on my craft. I’ve been working on getting my speed and power to work together as a unit. I’m looking forward to getting another win in front of my fans. I expect a big crowd at every fight because I have a very good fan base. It doesn’t matter how far I go, I know they will be there. I’m truly blessed to have them, and I want to give them a great show every time.”

AARON”SILENCER” MCKENNA, Welterweight Prospect:
“I’m very excited to be fighting on Facebook and on Golden Boy’s first-ever broadcast. I’ve had a great camp, and I’m ready to put on a great show for the fans in attendance and fans watching on Facebook. I always try to make my fights as exciting as I can for fans. I always try to put a good show and go for the knockout. Expect fireworks in this fight. I feel stronger in this fight than in previous fights.”

HECTOR “EL FINITO” TANAJARA, JR., Lightweight Prospect:
“I didn’t stop training after my last fight, so I’m feeling way better than in my last camp. I’m in great shape, and I’ve been doing 10 and 12 rounds of sparring. I’ve been working with Jonathan Navarro, and we’re helping each other in this camp. For my last fight, I knew he [Roger Gutierrez] was tough. You could tell from the weigh-ins that it was going to be heated. But things like that motivate me. When I fight good opponents, I look better. It helped me out because it showed what I could do and what I can still show I can do. The last fight gave me a lot of confidence. There were people saying that he was going to beat me or that he was stronger. It gave me a lot of confidence because there were even some rounds that I felt were easy. It gave me a lot of confidence. For this camp, we’ve been working on being busier and being aggressive. I’ve been working to get the knockout, and this fight will show that.”

Rojas vs. Diaz Jr. is a 12-round fight for the WBA Featherweight World Championship presented by Golden Boy Promotions in association with Universal Promotions. The event is sponsored by Tecate,”THE OFFICIAL BEER OF BOXING,” and Hennessy, “Never Stop, Never Settle.” The fights will take place Saturday, August 11, 2018 at Avalon Hollywood. The action will be streamed live on Facebook Watch in the U.S. and globally on the Golden Boy Fight Night Facebook Page beginning at 9:00 p.m. ET/6:00 p.m. PT. Fans can catch all the fights by following the Golden Boy Fight Night Page

Limited tickets for Rojas vs. Diaz Jr. are still available and are priced at $40, not including applicable service charges and taxes. Tickets are available for purchase at www.goldenboytickets.com and the Golden Boy Promotions Facebook page.