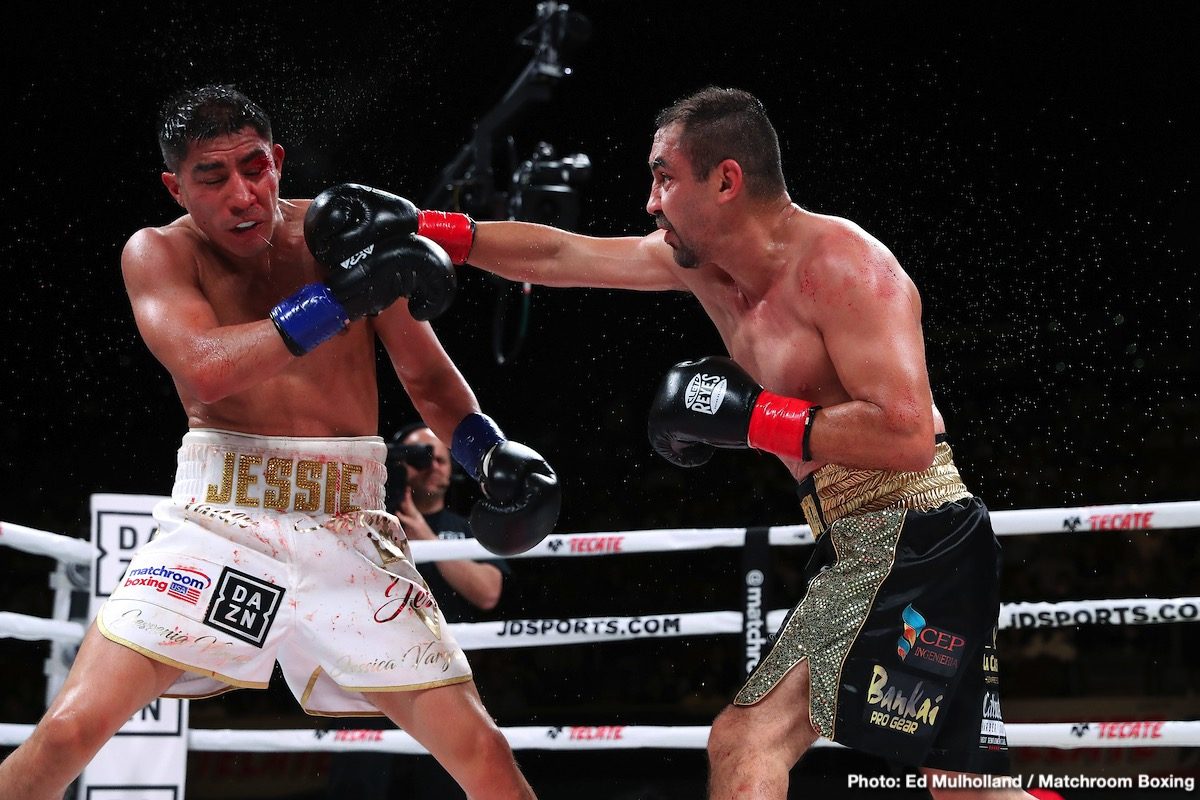 Jessie Vargas (29-2-1, 11 KOs) says his team is in negotiations for his next fight in December. The former two division world champion Vargas, 29, says the fight “might be” against former WBO junior middleweight champion Liam ‘Beefy’ Smith (28-2-1, 16 KOs).  This is a bad match-up on paper for the light hitting Vargas. Smith is experienced, and he can punch.

Vargas was hoping to fight for the WBO junior middleweight title against Jaime Munguia, but the fight fell through. Jessie thinks that Munguia didn’t want any part of him.

There’s talk that the Liam Smith vs. Vargas fight could wind up on the undercard of the Andy Ruiz Jr. vs. Anthony Joshua rematch on December 7 in Saudi Arabia.

The fact that Vargas is saying that it’s going to be a “fun one” in December is a big hint that he’ll be facing Liam Smith. It Smith, 31, looks as good as he did in his last fight against Mario Alberto Lozano, it might be a little too “fun” for Vargas. Smith showed a lot of power, and toughness in stopping Lozano in the 7th round on August 24. Liam had the pro-Lozano crowd against him, and he took some major shots before blasting him out in the 7th round.

Vargas’ lack of power will be problem against Smith

Vargas is a good basic fighter, but he’s not shown that he can punch even at 147. He moved up to junior middleweight in his last fight against 39-year-old former super featherweight champion Humberto Soto last April. That fight was contested at a catchweight of 150-lbs. Soto, 5’6″, can’t be counted a true junior middleweight fight for Vargas, because he doesn’t fight in that weight class. As such, Vargas is going to be asking a lot from himself to take on a rugged guy like Liam Smith without a shred of experience at 154. In truth, Vargas did not look that great against Soto. He won the fight, but there were moments where it looked like Soto had a chance.

Unbeaten lightweight contender Devin Haney (22-0, 14 KOs) battles the undefeated #4 WBC Zaur Abdulaev (11-0, 7 KOs) next Friday for the interim WBC lightweight title on DAZN at Madison Square Garden in New York. Haney, 20, believes that the winner of the fight could be the next WBC lightweight champion, because the recently crowned champion Vasiliy Lomachenko will be vacating the belt as soon as he unifies the division in early 2020.

Haney’s promoter Eddie Hearn wants Lomachenko to defend against Haney later this year before he fights in a unification match against the Richard Commey vs. Teofimo Lopez fight. Ultimately, it’s going to be up to Lomachenko’s promoters at Top Rank if they want to let him defend against Haney. He might be more trouble than he’s worth. Lomachenko, 31, is starting to show the tear of 400 amateur fights, and he might fall apart against Haney.

“He’s tough, he’s rugged, and I know he’s going to come to fight,” said Haney to Barbershop Conversations about Zaur Abdullaev. “This is basically a world title shot, because if Lomachenko vacates this will be for the WBC title,” said Haney.