Vargas, 32, is fighting for the second time at junior middleweight after having moved up to the weight class in 2019 in his fight against Humberto Soto.

Jessie wishes he had made the move up to 154 a long time ago, as his body feels better in this weight class. Given all the inactivity that Vargas has had since 2016, it would be a huge boost to his career if he were to defeat Liam Smith on Saturday night.

Getting a title shot against the winner of the May 14th fight between Jermell Charlo and Brian Castano would be Vargas in a position to become a three-division world champion. Vargas has won world titles at 140 and 147.

“100 percent,” said Jessie Vargas to Fighthype when asked if he wants to fight the winner of the May 14th undisputed 154-lb championship between Jermell Charlo and Brian Castano.

“I’m definitely ready for my fight. April 30th is my main focus, but right after that, we’ll look at the winner and see who comes out victorious and go from there.

“I know Charlo really well. We get along really well, and he’s very talented. He’s strong and explosive and I see him having the advantage.

“Let’s go, Charlo. There’s a lot running on this fight, and hopefully, he comes out victorious. After that, we can make it happen.

“My skills, my ring IQ, my explosiveness, and I owe everything to my preparation. I’ve had a tremendous preparation,” said Vargas. “I had a lot of fun at the same time, and they pushed me to the fullest.

“It’s perfect timing. This is the longest camp I’ve had. I’m reaching my peak. Again, I’ve had three camps in one. May was one, February was the second, and now April 30th. So that two-year layoff, I’m ready.

“I’ve had a long camp with a lot of sparring. I’ve never sparred this much in my boxing career, and I feel fantastic. At 154, I’ve been fighting big guys, young guys that are fast, explosive, and strong. At least they say they’re strong. I don’t feel it.

“With respect to my sparring partners, I feel great. My body has responded extremely well. Honestly, I feel like I’m sparring little guys, but they’re bigger than me. That’s what makes me comfortable.

“Not only that, but I should have made this move long ago. My first fight at 152 pounds when I decided to make this change in 2019, I won by knockout [against Humberto Soto]. I hope to continue that KO winning streak at 154,” said Vargas. 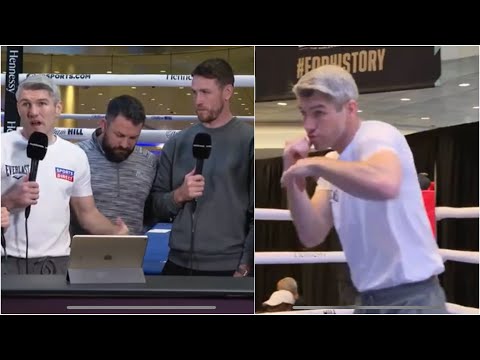