Undefeated Jesse ‘Bam’ Rodriguez (15-0, 10 KOs) used his defense to defeat former WBC super flyweight champion Carlos Cuadras (39-5-1, 27 KOs) by a 12 round unanimous decision on Saturday night in their main event on DAZn at the Footprint Center in Phoenix, Arizona.

Immediately after the fight, the 22-year-old ‘Bam’ Rodriguez announced that he would like to fight the winner of the March 5th fight between Roman ‘Chocolatito’  Gonzalez and Julio Cesar Martinez. 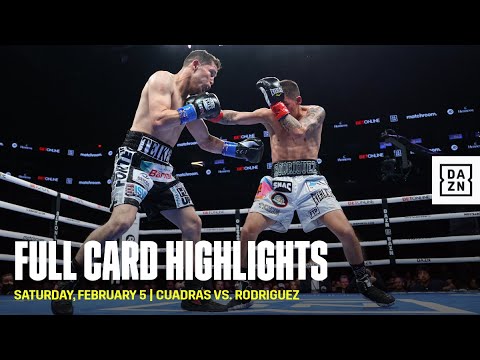 The 22-year-old Rodriguez dropped past his prime 33-year-old Cuadras in the third round with a right uppercut after catching him with a shot that he didn’t see coming. It wasn’t a big punch, but it caught the bigger, stronger Cuadras when he wasn’t expecting.

Rodriguez was willing to slug with the aging Cuadras through the first five rounds, but after getting with three hard uppercuts in the sixth round, he changed his tactics and boxed the remainder of the way.

Cuadras was too slow and tired to catch Rodriguez with his changing angles. The Cuadras that though Rungvisai in 2014 and Chocolatito in 2016 likely would have beaten Rodriguez.

The former WBC 115-lb champion Cuadras hadn’t fought in over a year since his 11th round knockout loss Juan Estrada in October 2020, and he looked rusty and not in excellent condition in terms of his stamina.

In the second half of the fight, Rodriguez constantly moved, darting around the ring to avoid getting hit by Cuadras.

The crowd started booing Rodriguez in the seventh round, letting him know they didn’t appreciate his overly defensive style.

They preferred Cuadras’ more entertaining style of fighting, which involved more offense. Rodriguez doesn’t fight like that, and he couldn’t because he was taking heavy shots.

Cuadras is not the same fighter that he used to be, and that’s why Rodriguez picked up the belt. It was the perfect situation for Bam Rodriguez.

He’s also lucky he didn’t have to fight Rungvisai, Chocolatito, or Estrada for the WBC belt tonight because the angles and defensive tactics probably wouldn’t have worked against those fighters.

They know how to deal with movers like Rodriguez, and their offensive skills are far better.

Rodriguez is a good fighter, but he’s not in the league of Estrada, Chocolatito, or Rungvisai. He’s more along the lines of McWilliams Arroyo in terms of talent, but not nearly as technical as him.

It’s questionable whether Rodriguez will get the Gonzalez vs. Martinez winner because the fight boxing fans want to see is Juan Francisco Estrada against the winner of that fight. If Rodriguez is willing to wait, he can fight the last man standing from those two fights.

Of course, former #1 WBC ranked contender Srisaket Sor Rungvisai might have something to say about that.

The former WBC 115-lb champion Rungvisai wants his mandatory title shot against ‘Bam’ Rodriguez, as he was supposed to be the one fighting for the vacant WBC title tonight against Cuadras. Still, he had to pull out due to an illness.

If Rodriguez needs to wait for the Chocolatito vs. Martinez winner tonight Estrada first, it means he will need to defend against Rungvisai.

That’s going to be a very tough fight for Bam, as Rungvisai is stronger than Cuadras, and he might be too powerful for the new champion. Rungvisai has two wins over Chocolatito and a victory over Estrada. The Thai fighter is dangerous.

“I feel good at this weight, so I will stay here for now, but if I get a good fight at 108lbs or 112lbs, maybe I’ll get the winner of Chocolatito vs. Martinez, who knows – I’m just open to the best fights,” said Rodriguez.