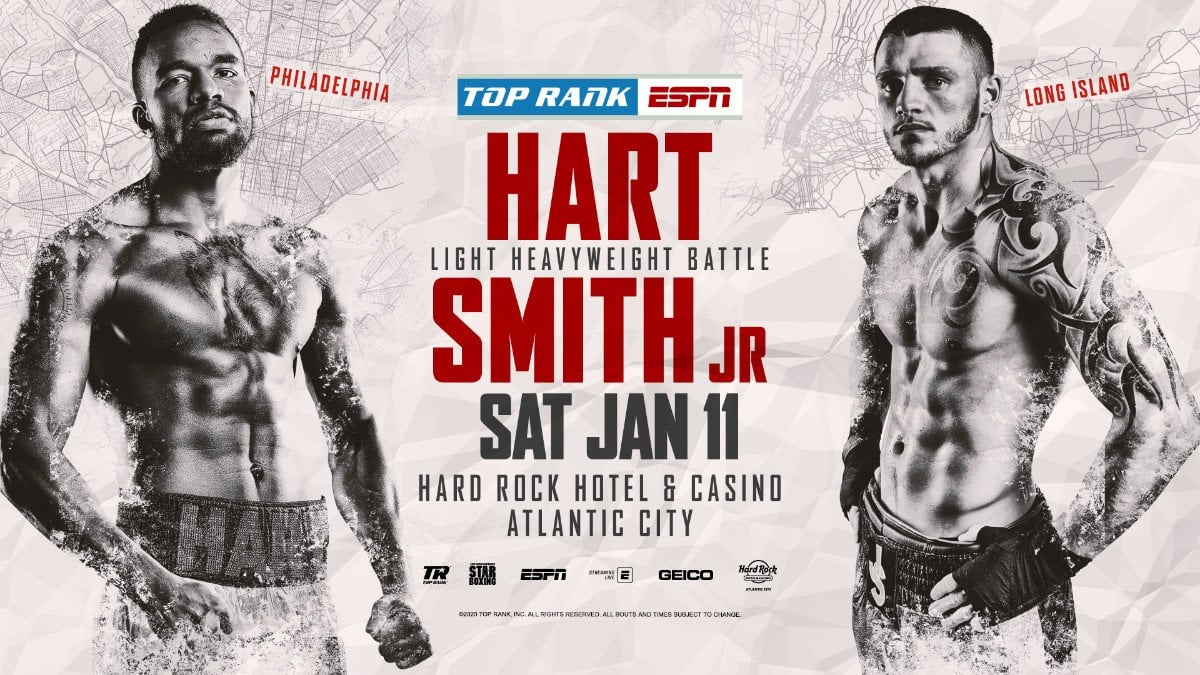 This one is personal. JESSE “HOLLYWOOD” HART, born and bred in Philadelphia, will take on JOE SMITH JR. Saturday, Jan. 11 from Hard Rock Live at Etess Arena in the 10-round main event, which will kick off the 2020 Top Rank on ESPN schedule.

It was Smith, the union construction worker from Long Island, who knocked Philadelphia legend BERNARD HOPKINS through the ropes and into retirement in December 2016. For Hart, who considers Hopkins a mentor, this fight is more than a step towards a world title shot.

ESPN and ESPN Deportes will televise Hart-Smith Jr. and a co-feature beginning at 10 p.m. ET/7 p.m. PT, with undercard action slated for ESPN+ beginning at 7 p.m. ET/4 p.m. PT. Promoted by Top Rank, in association with Joe DeGuardia’s Star Boxing, tickets priced at $100, $60, $40 and $25 (not including applicable fees) go on sale Friday, Nov. 22 at 10 a.m. ET and can be purchased by visiting www.ticketmaster.comand www.hardrockhotelatlanticcity.com.

“When you have two fighters who can punch like heck, anything can happen,” said Top Rank chairman BOB ARUM. “We believe Jesse Hart has everything it takes to become a world champion, but Joe Smith Jr. can turn the lights out at any moment. This is a sensational main event to kick off the Top Rank schedule in 2020.”

“This is personal. Bernard inspired me to be what I became,” Hart said. “I wouldn’t be right if didn’t avenge that defeat. I can’t move forward unless I beat him. This is a Philly thing. It’s more personal than business for me. I want a world title shot at light heavyweight, but I have to get through this guy first.”

“I am back in the gym and feel great,” Smith said. “I am focused and ready to bring everything I have. Jesse Hart might want to make this personal, but I didn’t even know who he was before this fight was brought up. I am ready for this. It is going to be a great night.”

“I look forward to a thrilling, fan-friendly fight in Atlantic City on ESPN Jan. 11,” said Star Boxing CEO JOE DEGUARDIA, Smith’s promoter. “Jesse Hart is Philly tough, but I love watching Joe Smith Jr. fight as his amazing punching power always puts him 10 seconds away from a KO win. It will be a rocking night at the Hard Rock Hotel.”

Hart (26-2, 21 KOs) is making his triumphant return to Atlantic City, where he is 7-0 with 7 knockouts. He twice challenged for the super middleweight world title previously held by Gilberto “Zurdo” Ramirez, but he came up short via a pair of close decision defeats. Following the second Ramirez loss in December 2018, Hart moved up to the light heavyweight ranks and announced his arrival with a 10-round decision victory over Sullivan Barrera on the Tyson Fury-Tom Schwarz undercard.

Smith (24-3, 20 KOs) was boxing’s “Cinderella Man” in 2016, upsetting Andrzej Fonfara via first-round TKO to earn the shot at Hopkins. He proved the Fonfara win was no fluke, as he bullied Hopkins around the ring before a combination knocked him through the ropes. Smith is coming off a decision loss to WBA light heavyweight world champion Dmitry Bivol, although he buzzed Bivol on several occasions in the championship rounds.

Use the hashtag #HartSmith to join the conversation on social media.