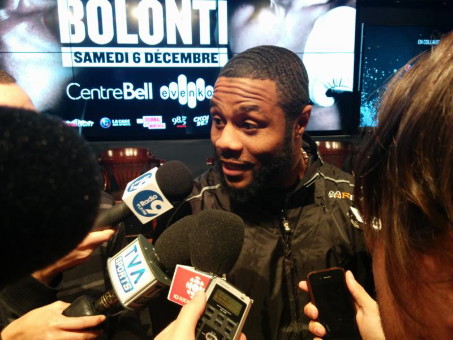 The thirty-two year old Canadian orthodox pugilist has won three in a row since his loss to Bernard Hopkins. Pascal defeated Lucian Bute by way of a unanimous decision in his last outing in January of this year. If he defeats Bolonti, he`s tentatively scheduled to fight World Boxing Association, International Boxing Federation (“IBF”) and World Boxing Organization (“WBO”) Champion, Sergey Kovalev on March 14, 2015 in either Montreal or Quebec City. Pascal`s ranked number one by the World Boxing Council (“WBC”) and WBO, number three by Ring Magazine and number four by the IBF.

Pascal vs. Bolonti and the undercard bouts will be distributed in the United States by Integrated Sports Media for live viewing at 8:00 pm ET – 5:00 pm PT on both cable and satellite pay-per-view via on demand, DirectTV, DISH and Vubiquity for only $24.95. It`ll also be available on pay-per-view in Canada on Indigo and Bell in French and English, as well as via Rogers, Shaw and Sask-Tel in English only.

Pascal was gracious enough to take time out of his busy training camp to discuss his upcoming fight with Bolonti, what it`s like fighting in front of his home crowd, his thoughts on the light heavyweight division and much more.

This interview with Pascal was conducted after news broke of his potential fight with Kovalev, so I was unable to obtain his comments on that matchup.

Jean Pascal: Training is going extremely well. I`ve been working on my revised boxing plan for a new style of a fighter since Donovan George pulled out of the matchup a couple of weeks ago. My background from the amateur days allowed me to quickly change for Bolonti`s style of fighting.

James Stillerman: What do you know about Bolonti and how do you expect this fight to play out?

Jean Pascal: Bolonti`s a tough and durable fighter with a very good chin; however, most of his fights have been in his home country, Argentina and the two times he boxed outside of Argentina, he lost both of those bouts. He`ll be on the road again for this fight and I`ll make sure that his road struggles continue. This`s going to be a great fight and I really look forward to it this Saturday.

James Stillerman: What`s it like to fight in front of your home crowd?
Jean Pascal: The province of Quebec is my home base and I love to fight here. I`ve the best fans in the world and they`ve been extremely supportive of me by attending all of my fights in large numbers.

James Stillerman: Where do you think you stand in the light heavyweight division?

Jean Pascal: I`m among the better boxers in the light heavyweight division. I`ve fought a very high level of competition in my career and beat many great undefeated fighters, which is good if not better than most of the boxers in this weight class. My commitment to my fans is to box the best fighters in the division and I pride myself on not padding my record.

James Stillerman: Are you ready to fight for a world title in 2015?

Jean Pascal: Right now I`m the mandatory challenger for Adonis Stevenson but he has been ducking me even though I`m prepared to fight him. This past autumn, I tried to negotiate terms with him, his manager and promoter and in the process I conceded a great deal. Despite my concessions, he opted not to fight me. There`s also Kovalev on the horizon and we`ve been in talks to fight one another, which might happen next spring if I beat Bolonti.

James Stillerman: What have you learned from your two losses that makes you a better boxer today?

Jean Pascal: Both of these losses made me a better student of the sport. From the first loss with Carl Froch, I learned about my own toughness and durability. Six months later, I lost the WBC Light Heavyweight Champion in a close match with Hopkins, four years ago. Most of Hopkins` opponents declined after they lost to him like Kelly Pavlik and Tavoris Cloud, yet I won three consecutive fights over very good competition and I`m getting closer to fighting for a world title again, so I fared much better than his opponents. My losses increased my mentally toughness and helped me become much better in all aspects that are needed to be at the top of my game.

Jean Pascal: I`ve accomplished a lot, so it`s difficult to chose one great highlight. Four accomplishments that stand out for me was moving up in weight in my second fight at light heavyweight division and beat an undefeated champion, Adrian Diaconu, on his home ground. Two fights later, I defeated undefeated former light heavyweight world champion, Chad Dawson, who was the former Ring Magazine pound for pound top ten fighter in the sport. I`m proud of beating Lucian Bute for the WBC Diamond Belt and having my bout with Carl Froch awarded the WBC`s most exciting fight in 2009.

James Stillerman: Where you ever close to quitting boxing?

Jean Pascal: Never. I don`t quit. I`m well surrounded and I`ve the desire to be the very best in boxing. People who quit never become the best. There`s a lot left for me to achieve in this sport and I always tend to look forward and never dwell on the negatives too long.

James Stillerman: Who was the toughest opponent you`ve faced?

Jean Pascal: Tough question. I`ve fought a long list of accomplished and tough opponents. Carl Froch was awkward and a hard hitter. Chad Dawson was very slick, so he was a challenge. Adrian Diaconu was very powerful and Bernard Hopkins is a master of the sport. Each of these fighters was a unique challenge in their own way.

James Stillerman: You`ve dealt with injuries throughout your career, so are you fully healthy and do you`ve any lingering health issues?

Jean Pascal: I did have shoulder surgery, a bicep tear and a bone bruise; however all three of these injuries healed perfectly and I`ve no lingering issues with them. Boxers undergo injuries from time to time and I`ve been no exception. The way I stay healthy is by staying active and that`s what I tend to do in 2015 and into the future.

James Stillerman: What do you want to achieve in boxing before you retire?

Jean Pascal: I want to regain my position at the top of the light heavyweight division and then move upward in weight and become the undisputed champion in a higher weight class like what Roy Jones did when he became a world heavyweight champion.

James Stillerman: Can you talk about your amateur career and what you accomplished?

James Stillerman: Anything you want to tell your fans?

Jean Pascal: My goal is to give my fans great fights and perform at the level they come to expect from me. I`m committed to fighting the best fighters which I promise to continue to do until the end of my career. I`m thankful for all my fans for being so supportive of me.

James Stillerman: Any closing thoughts or do you want to talk about anything that I didn`t discuss?

Jean Pascal: I look forward to my next fight. The bout in front of me is where all of my focus is and I can`t wait to get back in the ring and do what I love most and that`s performing at the highest level and winning.