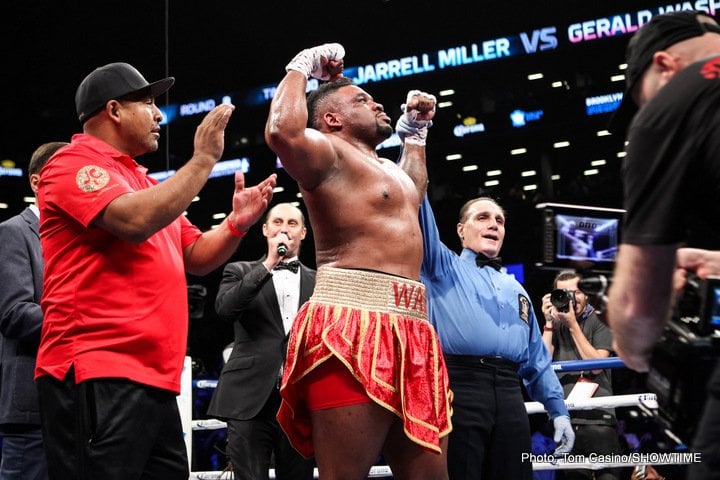 And to think, many fans were unhappy with a supposed fight between Jarrell Miller and Artur Szpilka!

The word is – via Dan Rafael of ESPN.com, who has numerous sources upon which to rely – unbeaten heavyweight contender Jarrell Miller of New York will face former light-heavy and cruiserweight champ Tomasz Adamek in Chicago on October 6 on promoter Eddie Hearn’s first US-based DAZN show.

The fight, already being lambasted by many as a gross mismatch, has not been officially confirmed or announced but whispers about this particular match-up have been going around for a week or more now. What on earth can we expect if this one does go ahead?

Miller, AKA “Big Baby,” is a huge – and by huge we mean really huge, as in 298 pounds huge – heavyweight contender who is seemingly a fight or two away from a crack at a world title. Miller is also young and entering his prime, one would think anyway, at age 30. Adamek, a great fighter and a proud warrior in his day, was never anywhere close to big (size-wise, that is – as a card-seller “Goral” was huge in his day) and he is now a 41 year old who, in the words of Rafael, has not been relevant since 2012.

How will Hearn and co. big-up and sell this one?

Okay, on paper, Adamek, 53-5(31) is a name, he has a fine record, he has mixed with the absolute best, even at heavyweight, and he has never been what you could call “destroyed,” as in taken out in a round or two. In fact, in over 50 pro fights, Adamek has only been stopped by big men Vitali Klitschko and Eric Molina, both heavyweights halting him in the tenth-round. And the former two-weight champ has won his last three fights – albeit against so-so opposition he faced at home in Poland.

I can hear it now if (or when) “Big Baby” crushes Adamek inside four or five-rounds – “he made a statement,” etc, etc.

In fact, Miller, 21-0-1(18) will have made no such thing by flattening a once superb fighting machine. Miller will instead have wasted yet more time fighting opposition he knew (and we knew) going in he would defeat when he could instead have been honing his craft against good, solid heavyweights.

In short, we do not need to see this fight.