Jarrell ‘Big Baby’ Miller says Anthony Joshua will be getting $75 million for his next fight when he challenges IBF/WBA/WBO heavyweight champion Andy Ruiz Jr. (33-1, 22 KOs) in a rematch on December 7 in Riyadh, Saudi Arabia. Miller isn’t sure how Joshua (22-1, 21 KOs) will do in the second fight with Ruiz. He thinks there’s a lot of unknowns going into this match in terms of what will be allowed in Saudi Arabia.

Joshua beat Joseph Parker in Cardiff, Wales in March 2018 in a fight in which the referee prevented inside fighting. This move by the referee to keep the action on the outside basically gave the victory to Joshua. If there’s a referee or judges that favor one fighter over the other on December 7th, then it could be dicey situation. The last thing Matchroom promoter Eddie Hearn would need is a referee that favors Joshua or judges that score the fight in a bizarre way.

Miller (23-0-1, 20 KOs) was supposed to challenge Joshua for his titles last June, but he tested positive for GW50156, which caused the New York State Athletic Commission not to give Big Baby his boxing license. Miller also tested positive for the banned substances HGH and EPO.

Miller would have made a lot of money for the Joshua fight. Instead, he was pulled from the card, and given a six-month suspension by the World Boxing Association. Miller hasn’t fought in 11 months since his 4th round knockout win over Bogdan Dinu last November. The good news is Miller says he’ll be fighting in November or December. He’s looking for a new promoter, and he says Top Rank has given an offer that is close to what he’s looking for.

“Has Andy kind of settled down the last couple of months?  Is AJ more hungry now?” said Miller. “In Saudi Arabia, what can be done, and what can be tolerated? I don’t know. So when you hear that…and he got his a– whooped, and he’s getting $75 million. Listen, when I beat their a–, I’m going to Saudi too. We’ll see,” said Miller.

If Joshua is getting $75 million for the rematch with Ruiz, it makes you wonder what Andy is getting. That’s a hefty chunk of change that Joshua will be bringing in. With that kind of payday, will Joshua be willing to battle hard when the going gets tough? Some boxing fans think Joshua quit in the 7th round last June in his previous fight against Ruiz at Madison Square Garden in New York. Joshua didn’t come off the ropes when the referee was checking on him after a knockdown, and it’s thought that he quit in a tactical way.

“Big Baby is almost back. I am back. I’m going to figure which team to go with. It could be ESPN, it could be Fox, and it could be DAZN,” said Miller. “We don’t know yet. Money talks. I don’t know yet, but we’ll see, you know?” said Miller when asked when he’ll be making his decision about which promoter or network he’ll be going to.

“I wouldn’t say officially, but their paperwork is the closest one to what I kind of want. But nothing’s official. I haven’t signed with nobody yet,” said Miller.

It would be interesting to see who eventually signs Miller, and for how much they’re willing to give him. With Miller recently testing positive for banned substances, there’s some uncertainty with some boxing fans about whether he’s been clean in his past fights. When a fighter tests positive for drugs, the natural inclination for fans is to suspect that he’s been using all along.

For any promoter that signs Miller, they might be concerned. It’s not just the question of whether Miller used in the past, but it’s also whether he can still fight at a high level. Will he test positive again? If Miller ends up suspended again, he could be out of action for a long time.

“Tyson didn’t look great, but I sparred with him before and I know he’s a game opponent,” said Jarrell Miller to Fighthub about Fury not looking good against Otto Wallin. “If it had been me, I would have knocked him out for sure. Listen, ESPN is paying him [Fury] a lot of money, and they’re betting a lot on him being a character, and I get it. More power to them.

Miller wasn’t too impressed with lineal heavyweight champion Tyson Fury’s recent win over Otto Wallin. Big Baby thinks he would have knocked Wallin out if it had been him.

Big Baby Miller to fight in November or December

“He’s a contender. I could knock [Kubrat] Pulev out in four rounds,” said Miller when asked about his thoughts on the former world title challenger. “Yeah, we’ve been in the gym, and going through the motions really. It’s a little bit different when you get a fight signed. Hopefully, late November or early December. I don’t know when exactly, but I’m working on it,” said Miller.

Whoever signs the 31-year-old Miller, they’ll need to be careful in his first fight back by not matching him too tough. After all, Miller will have been out of the ring for 12 to 13 months, and that’s a long time to be sitting inactive

“The referee gave Deontay [Wilder] a lucky ticket, because anybody else, that fight [Wilder vs. Luis Ortiz 1] would have been stopped,” said Miller about Wilder’s fight against Ortiz in 2018. “So let’s see what happens.

“If Ortiz can get him out of there early, we’ll take the next level. I think the early rounds will favor Ortiz, and the later rounds Wilder. No,” said Miller when asked if he would be surprised if Ortiz pulls off the upset.

It would be a big upset if the 40-year-old Ortiz defeats Wilder, because he’s not expected to win the fight. 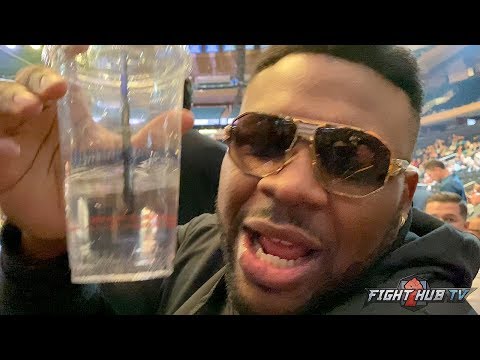