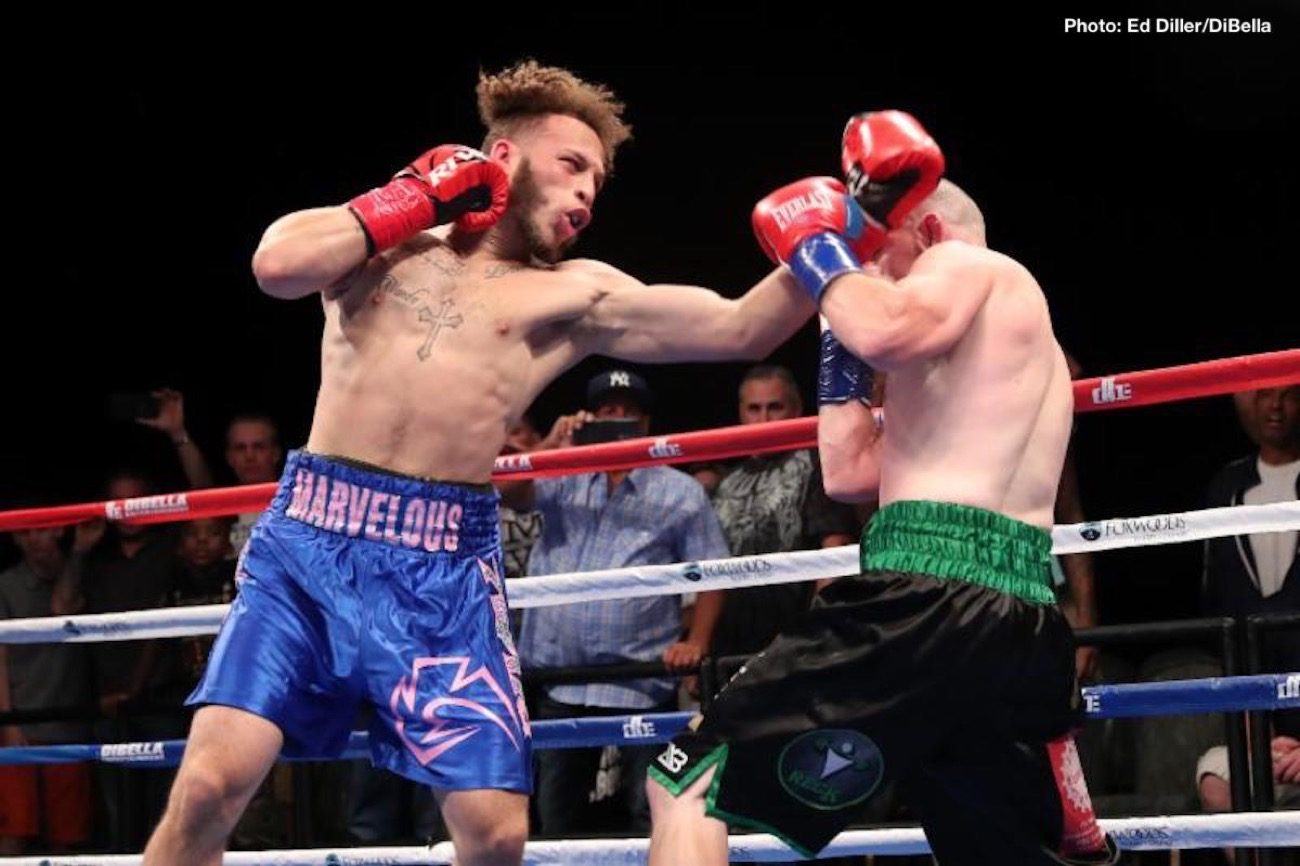 Super lightweight prospect Mykquan “Marvelous” Williams (15-0, 7 KOs) will look to keep his unbeaten record intact when he takes on Tre’Sean Wiggins (11-4-2, 6 KOs) in the main event at the Generoso Pope Athletic Complex in Brooklyn, New York on October 24th in a ten-round bout.

Williams will take a step up in competition when he fights the tough, tall, hard-hitting Wiggins, in his third bout of the year. Wiggins is unbeaten in six of his last seven fights.

The twenty-one-old-year-old orthodox fighter from East Hartford, Connecticut, won the vacant WBC USNBC super lightweight title in his last outing when he defeated Rickey Edwards, via a ten-round unanimous decision. He also won the WBC USNBC Silver super lightweight belt in his eleventh fight, with a first-round technical knockout over Orlando Felix. Williams is ranked fifth by the United States Boxing Association, and twelfth by the North American Boxing Federation.

He was a heavily decorated amateur star (45-13), who was a five-time national champion: 2012 National PAL Titleholder, 2012 National Silver Gloves Championship, and a three-time gold medal winner at the Ringside World Championships from 2010 to 2012. He decided to go pro in 2016, ten days after his eighteenth birthday, after being too young to compete for a spot on the USA Boxing Olympic Team, and not wanting to wait another four years to compete in the Olympics.

Williams was gracious enough to take time out of his busy training camp to answer some pressing questions about his upcoming fight with Wiggins, his thoughts on how his career has progressed thus far, what his childhood was like, who he has sparred with, and much more.

James Stillerman: What are your thoughts on your upcoming opponent Wiggins and how do you see this fight playing out?

Mykquan Williams: Honestly, I do not know too much about him other than he is a tall fighter. I have seen a little tape on him and from what I have seen there are some things that he does wrong that I think I can capitalize on. I will be victorious whether I win by a knockout or it goes the full ten-rounds.

James Stillerman: How would you rate your last performance against Edwards?

Mykquan Williams: My last fight was my best performance of my professional career. It was my first ten-round fight, and I fought well. I was extremely physical with Edwards, really aggressive, dictated the pace, systematically broke down my opponent as the bout progressed, and I punched with bad intentions.

James Stillerman: What was it like to win your second regional belt and headline your first fight card in your last outing?

Mykquan Williams: It was pretty cool to headline a boxing card, and win another regional belt, especially since I got to do it in front of my hometown fans who were constantly chanting my name all fight along.

James Stillerman: How do you think your career has progressed thus far?

Mykquan Williams: It is going well. I am headed in the right direction. I am not rushing my career right now because I am only twenty-one-years-old. I am still undefeated, I am fighting better opponents each time out, and my team is doing a great job at preparing me to be a better overall fighter.

James Stillerman: What do you think about some boxing experts who consider you a rising prospect at 140-pounds?

Mykquan Williams: It is really great to hear. It shows that my hard work and dedication is paying off, and it shows my potential, and where I can grow as a fighter.

James Stillerman: What are your goals for the next couple of years?

James Stillerman: Have you sparred with any world-class fighters?

James Stillerman: Can you talk about your childhood and what it was like?

Mykquan Williams: My childhood was difficult. I never knew my dad because he was murdered when I was eight days old. When I was ten, our house burnt down, and we lost everything, including all of the things that my mom had saved for me that belonged to my dad. While growing up, I was constantly surrounded by gun violence and gangs, however, I was extremely lucky that my family and friends were around me, and kept me out of trouble.

James Stillerman: How did you get into boxing, and what kind of impact did the sport have on you?

Mykquan Williams: My aunt Addy Irizarry, who was a former professional boxer [she fought fifteen professional fights from 2007 and 2013] introduced me to boxing when I was about eleven-years-old. She took me to my first boxing fight, and I really liked it. So, she brought me to see Paul Cichon, a boxing trainer, and I have been with Paul ever since. Boxing has played a very important role in keeping me out of trouble as a child because it kept me busy after school, so I did not have any time to get involved with all the other bad things that were around me.

James Stillerman: What kind of an impact has your trainer had on your life?

Mykquan Williams: Paul has been a father figure to me. He treated me like a son and took me out to eat all the time when I was growing up. I cannot thank him enough for everything that he has done for me over the last ten years.

James Stillerman: What do you want to say to your fans?

Mykquan Williams: I want to thank all of them for their love and support, and I want them to know that bigger and better things will come for Team Williams. Stay tuned.

Williams is promoted by Lou DiBella of DiBella Entertainment, managed by Jackie Kallen, and trained by Paul at the Manchester Ring of Champions Society. 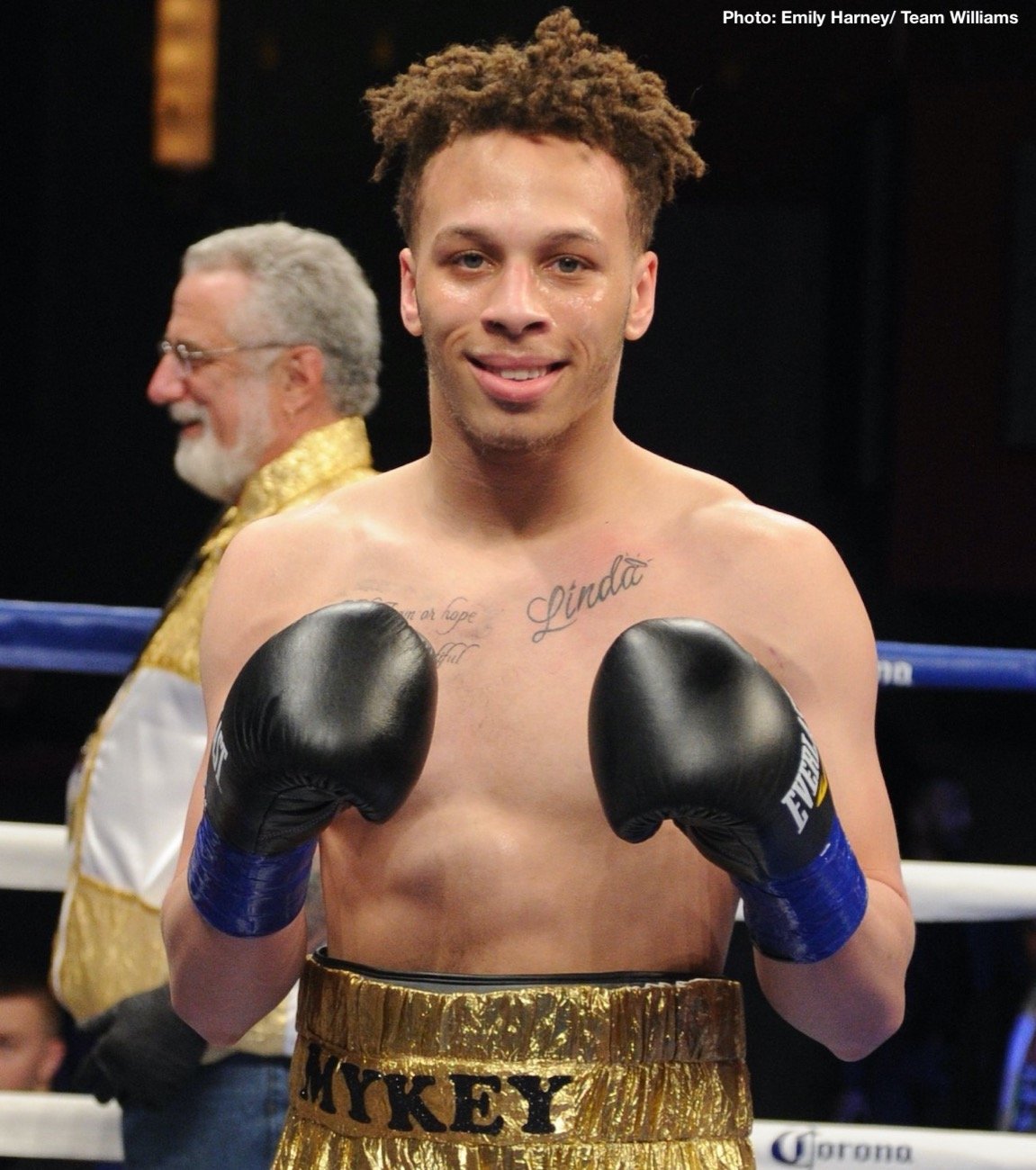 For more information about Williams, and the latest updates on his upcoming bouts, friend him on Facebook at /MykquanWilliams, and add him on Twitter @MarvelousMyke and Instagram @M.mkw_.