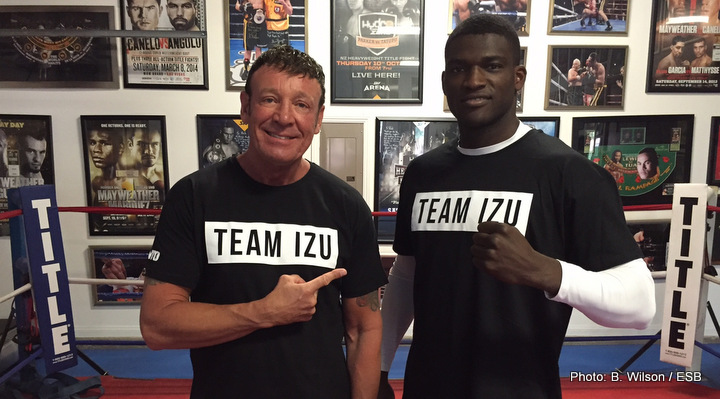 In an ideal world Izu’s foray into the world of reality television would have lasted a few weeks, bumping his name recognition in the process before being voted off the show and returning fairly quickly to the squared circle. However, the competitive instinct that is the mark of any top level sportsman soon kicked in and Izu through hard work and dedication soon became one of the favourites to win the whole competition, making his way to the final 4 before finally being eliminated.

And now here we are back at the Pullman Hotel in Auckland New Zealand, as Izu prepares to face his next opponent, Argentinian Ricardo Ramirez on the undercard of Joseph Parker’s next fight on July 21st against Solomon Haumono at the Horncastle Arena, Christchurch.

Training has by all accounts gone well, Izu seemingly slipping straight back into the routine and now with a few new moves to boot, trainer Kevin Barry has been particularly pleased and remarks to me while watching Izu go through his drills, that he believes his Polish charge could well be ‘the sleeper in the division.’

Now with drills over for the day, Izu and I sit down to discuss what he has been up to over the past few months.

I startby asking him what it was like watching his good friend and training partner Joseph Parker engage in a tough fight with Carlos Takam for the IBF title eliminator spot. I’m particularly curious to know what it was like for Izu to not be there for that moment, especially as he and Parker have been so used to doing all their training together. It certainly brings an energy to the camp that maybe wasn’t there for Joseph’s last fight.

‘Yeah it’s that day-in and day-out stuff that you only you and someone else who is also a fighter can understand. That connection. It’s actually what I believe helped make the Klitschko brothers so strong. They had like a double strength from feeding off each other. Obviously Joe and I are not brothers but we have that connection and it’s a good feeling.’

Working together works I guess.

Speaking of such, I’m also wondering how difficult it has been for Izu to reintegrate himself back into a tough camp especially coming off a long layoff like the one heexperienced in Poland? Six months without that physical contactmust make it difficult to adjust? Surprisingly Izu contends that it wasn’t so much of a problem at all.

‘Actually the first few sparring’s went OK and I felt good, and I know Kevin (Barry) was also pleased. I think the reason being I actually missed it and I couldn’t wait to get back into the ring and back to work.’

I also assume that although six months is probably longer than ideal, there would have been a certain amount of mental refreshment that came with the break?

‘Absolutely, much fresher, because it’s as simple as this: I missed doing what I do and the second thing is I now have a different perspective on what I do. So now I can sit back and recognize that I can do things a little bit better, having that time to step outside and evaluate things, because when you are in camp you are always working and don’t really have the luxury of doing this.’

I ask him the simple question; what sort of things would you change?

‘I got more in touch with my body through the dancing. Dancing is brutal man! I was even too scared to weigh myself to see how much weight I’d lost. Dancing requires so much movement and coordination, it helped so much with my balance and flexibility. People asked, “did I have fun?” And no I didn’t have fun! It was a helluva lot of hard work.But as a result I’m hitting harder as I’m now much better at twisting from my hips, it’s been surprising.’

As much as dancing may have been a chore at times for Izu it was obvious though that the hard work paid off as he routinely scored 10’s on the show and made it all the way to the semi-finals. I ask him what his perspective is now he has left the show?

‘I will tell you, it gave me a better understanding on what it is like to do something that is your passion like boxing as opposed to doing something which for a short period of time was my job, which was the dancing. Even though I became good at it, it didn’t give me the satisfaction that boxing does.’

And turning his thoughts to boxing, now that the profile has been built in Poland what are the next steps for him?
‘Well we hope to fight in Poland soon, like within the next few months. Most probably in November and I’m excited to finally show the fans what I’ve got. People believe in me and want to see me in some challenging fights.’

I also wonder with several other high profile Polish heavyweights out there, whether it will be a domestic affair or just an opponent that will constitute a step-up in Izu’s career?

‘It doesn’t so much have to be a Polish fighter but more a fighter that will allow me to show my skills. The fans want to see more from me and I want to show them more. ‘

With that being so, I ask Izu if he and Kevin Barry have looked at specific names for the next fight?

‘Not necessarily. It’s more acase of choosing the right opponent, but we don’t have a specific name in mind right now, we’ll just have to see what is available after my next fight.’

So a local derby, which I know are routinely massive events in England isn’t necessarily on the cards for you right now?

‘Well for instance I’ve met Szpilka and I like the guy, he’s agood guy and I respect him and maybe one day there will be afight between us, but the truth is he’s much further down the path than I am. He’s fought for a world title. There is no point taking this type of fight until I feel I’m ready for it. I want to do things right.’

It seems like a fairly logical response but it would also seem that this means Izu will be looking at a top 15 or top 20 type opponent soon?

‘It’s more a case of getting past this opponent I’m facing in Christchurch next. Look I’m supposed to beat this guy and I believe I will. It’s a fight we’ve taken so that I can continue my training with Kevin and Joseph as they have come back to New Zealand for Joe’s next fight. This is a fight that is designed to get the motor warmed up again, but also you must always be careful to never overlook any opponent. Saying that let’s get through this fight and then we’ll have this conversation again in a few days.’

Looking at Izu’s upcoming fights, I put it to himthat having recently sparred world champions such as Bermane Stiverne and Wladimir Klitschko as well as world rated stable mate JosephParker, it must be a challenge at times to find the motivation to face an opponent several leagues below that sort of calibre of fighter.

‘Yes that’s true. I like to have that motivation, that sense of danger is what gets me going. I had that several times in kickboxing where you are looking at the guy opposite you and he is a beast. I need excitement, that’s when I operate the best.’

As we are winding the chat up Izu laughs and jokes around just shooting the breeze, happy with an almost serene sense of calm to be back doing what he does best, which is talking, walking and breathing boxing. Put the dancing shoes away, the boxer is back in town.