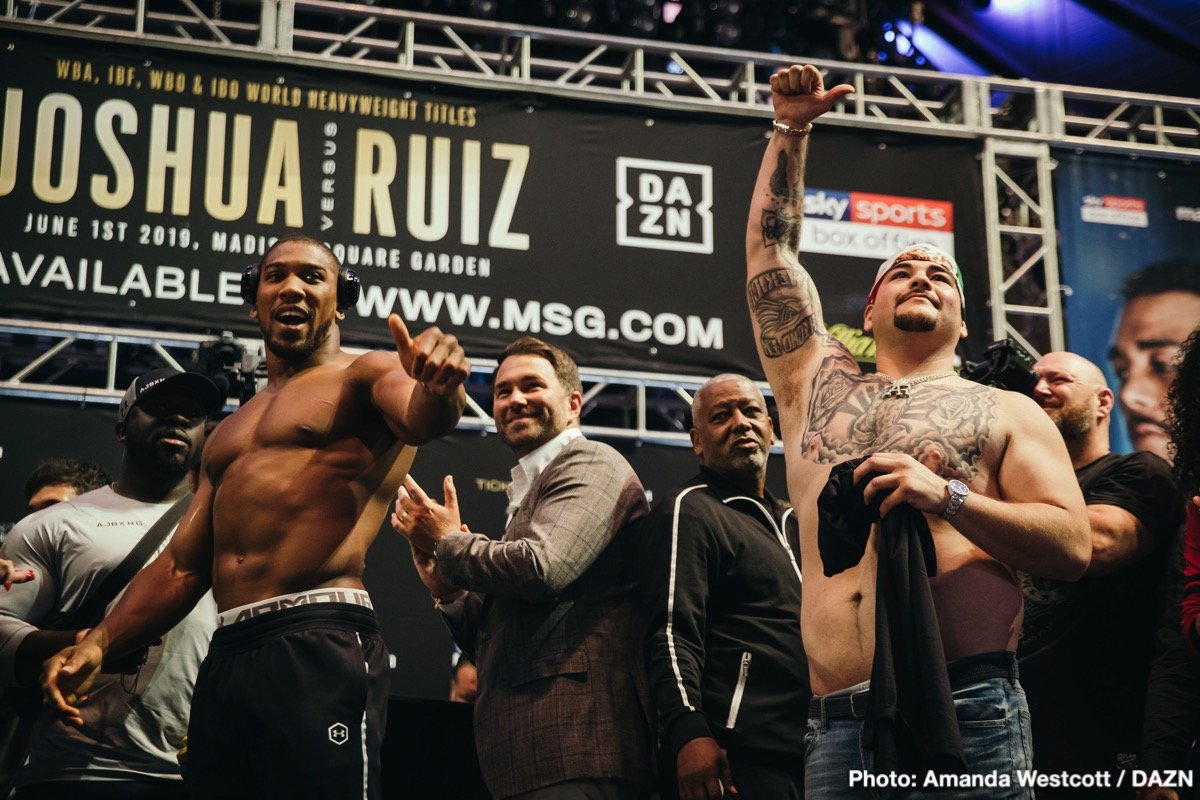 It’s fight week! And what a massive fight we have to look forward to this Saturday night. Promoter Eddie Hearn, who says he has never felt quite the way he is feeling right now – nervous, excited, tense – has gone as far as to say the Andy Ruiz-Anthony Joshua rematch is “the fight of the century,” and though we had the big dud that was the Floyd Mayweather-Manny Pacquiao fight this century (2000 to current day), maybe the heavyweight showdown the whole world will be watching is indeed the biggest fight so far this century.

Both men are ultra-focused on winning, feeling as they do that their very careers are on the line. Both fighters have reportedly settled in well in Saudi Arabia, have been training hard, are in shape and are ready to go. In fact, according to Joshua sparring partner Timothy Moten, AJ is “blowing away” his sparring partners. Moten says Joshua has a “destroy” mentality. Fans know how the great Marvin Hagler had a “seek and destroy” mentality when he fought, and now it seems “nice guy” Joshua is in the same frame of mind.

Joshua was criticized for his somewhat passive, even content behavior in the lead up to and after the Ruiz defeat in June; smiling as he was even after losing. But deep inside, Joshua has been suffering a “nightmare” since losing and he wants to avenge the loss – badly. Certainly there have been no short-cuts in training, according to Moten, who spoke with Sportsmail.

“He’s dropped a few of his sparring partners and he’s rocked a lot,”Moten, who has sparred 60 rounds with Joshua, said. “Joshua is by far the hardest hitter I’ve been in the ring with. Mentally he’s in a good place. I can see that in his eyes. He’s got a focus I’ve not seen. He’s got that warrior’s spirit. His mentality is to destroy. I don’t want to say any names, but I’ve seen guys come into camp, get blown away and get sent home that same week.”

Of course sparring is one thing, the actual fight is something entirely different. Ruiz has no doubt been taking care of business in sparring as well, even if we have not heard tales of destruction from inside the Ruiz camp. Joshua, 22-1(21) has slimmed down quite a bit for the fight, while Ruiz, 33-1(22) has dropped a few pounds. Now, with just five days to go until fight time, the two heavyweights will have to keep their nerves in check. Joshua might find this a lot harder than his sparring work.

This fight could well come down to who has the stronger mind, not the stronger punch. Hearn says he cannot wait for the fight to get underway. He’s not the only one.