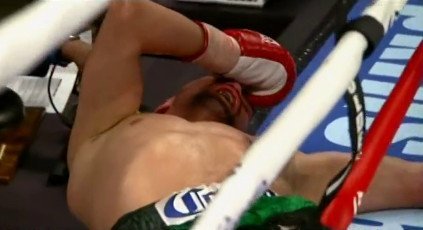 49-year-old IBF light heavyweight champion Bernard Hopkins (55-6-2, 32 KO’s) completed the first part of his goal of unifying all of the 175lb titles by beating arguably the weakest link among the champions in beating WBA light heavyweight champion Beibut Shumenov (14-2, 9 KO’s) by a 12 round split decision tonight in their unification bout at the DC Armory in Washington, DC.

The judges scores were 116-111, 116-111 for Hopkins and 114-113 for Shumenov. The judge that scored it for Shumenov must have been focusing on his greater work rate and ignoring the cleaner landing shots from Hopkins. It seemed like a clear cut win for Hopkins tonight. He knocked Shumenov down with a right hand in the 11th, and continued to dominate him in the 12th. Shumenov didn’t have the hand speed or the defensive skills to compete with Hopkins, and he ended up getting badly out-boxed in this fight.

33-year-old Paulie Malignaggi (33-6, 7 KO’s) was seriously thrashed by IBF welterweight champion Shawn Porter (24-0 15 KO’s) in getting stopped in the 4th round of a one-sided fight. Porter bludgeoned the light hitting Malignaggi into submission by knocking him down twice in the 4th round to get a stoppage. Porter bloodied Malignaggi’s face in the 1st round with a hard shot, and forced him up against the ropes and battered him with shot after shot.

Porter continued to nail Malignaggi at will with shots in rounds 2 and 3, and had him hurt with a left hook in the 3rd. In the 4th, Porter knocked Malignaggi down with a right hand to the head that caught Malignaggi while he was ducking. Malignaggi got up but he was badly hurt and not in the kind of condition to where he could fight back effectively. Porter quickly walked Malignaggi down and landed two solid right hands to the head, and then pushed him to the canvas. The referee still counted it as a knockdown because of the right hands that Porter had hit Malignaggi with.

This has got to be the worst fight of Malignaggi’s career because he took a real beating by Porter and was never competitive.

After the fight, Malignaggi said he was unsure if he’ll continue his career. He said he’ll think about it.

In a disappointing performance from WBO middleweight champion Peter Quillin (31-0, 22 KO’s), he defeated Lukas Konecny (50-5, 23 KO’s) by a 12 round unanimous decision in a one-sided fight. The final judges were 120-108, 119-109, 119-109. Konecny suffered a cut over his right eye in the 8th, and a bloody nose. The crowd speed the 2nd half of the fight booing due to the lack of quality action. Quillin was mostly boxing and looking to counter Konecky. As for Konecny, he was very catuous and selective about when he’s attempt to throw punches. He was really shot looking, and it looked like a match between a light middleweight and a middleweight.

After the fight, Quillin said he either wants to face the winner of the Sergio Martinez vs. Miguel Cotto or the winner of the Julio Cesar Chavez Jr. vs. Gennady Golokvin. Based on how Quillin fought tonight, he’d likely lose to all of those guys,.