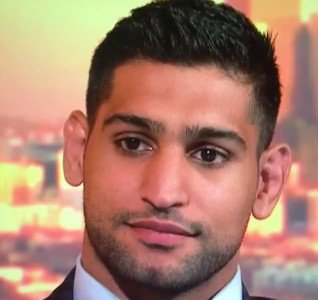 “Obviously, before Khan should get the bigger end because he’s the bigger name,” Hearn said to IFL TV. “Khan never did great numbers on pay-per-view. When he went to Sheffield last time, they really didn’t sell any tickets. I’m not sure what the name carries anymore out here in terms of value. I don’t know. Kell’s got the belt. Everyone’s got to be sensible. If you want to make a load of money be sensible. It’s very easy to talk your way out of that fight. Amir isn’t the most popular guy in the UK. The support for a Brook-Khan fight would be hugely loaded to Kell because people will make Khan out to be the villain.”

I’m not so sure that Hearn is going to be able to get Khan to agree to be the B-side against Brook, and it might that Hearn is going to take himself out of the fight. Hearn needs to step back and realize that Brook’s win over Shawn Porter, as good as it was, is still the only credible opponent on Brook’s entire 33-fight resume. The other guys that Brook has fought – Matthew Hatton, Carson Palmer, Vyacheslav Senchenko, and Alvaro Robles – were all easy marks for Brook. They weren’t A level fighters, and none of them arguably deserved to be ranked in the top 15 at 147.

Khan might be better off staying on his own path and let Hearn find other opponents rather than accepting that fight right now. It doesn’t make sense for Khan to take the fight unless he’s getting the money that he feels he deserves. The IBF belt really doesn’t mean anything in terms of value. Brook is basically a paper champion at 147, because the guys that boxing fans see as the legitimate champ at 147 is Floyd Mayweather Jr and Manny Pacquiao. Those are the two fighters that fans look at when they talk about the champions at 147. Brook is just a belt holder coming off of a not so impressive win over Shawn Porter last Saturday. It wasn’t a pretty fight by either guy and Brook had to clinch in order to win. That’s never a good way to win.

If Khan agrees to be the B-side to Brook just because he’s got the IBF title, then he might be selling himself short.