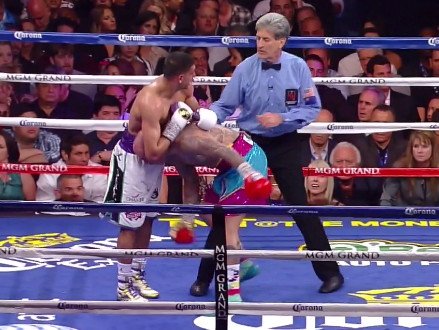 Ricky Hatton was very impressed with the performance from WBC Silver welterweight champion Amir Khan (29-3, 19 KO’s) with his recent 12 round unanimous decision win over former WBA welterweight champion Luis Collazo (35-6, 18 KO’s) on the Floyd Mayweather Jr. vs. Marcos Maidana fight card on May 3rd at the MGM Grand in Las Vegas, Nevada.

Hatton liked Khan’s speed, footwork and defensive ability that he showed in the fight. And Hatton thinks that Khan would have never lost in the past to Breidis Prescott, Lamont Peterson and Danny Garcia if he fought the way he did against Collazo.

“It was a very mature and disciplined performance to be honest,” Hatton said. “He used his footwork, he used his boxing ability, and he used speed. He certainly looked strong at 147. He’s looking strong; he’s looking solid, but more importantly he’s got his tactics right. I think if Amir Khan boxed every single fight with the footwork, movement, the hand speed, the combination punching, he could probably have an unbeaten record.”

In looking at Khan’s loss to Peterson, Khan fought pretty much the same way in that fight than he did in the Collazo fight. There was a lot of the same tactics that Khan used, such as nonstop movement, fast combinations, sticking his arm to keep Peterson from getting close, shoving, pulling down on the head, head locks and a lot of clinching.

Khan came close to winning the Peterson fight, but is shoving of Peterson ended up costing him 2 points. Khan later said that he was pushing Peterson off because he was coming in head first, and he was worried about getting rammed by his head. But the shoving was a constant thing that Khan did, and normally fighters don’t resort to the kind of shoving that Khan did in that fight.

The Peterson fight still would have ended up as a loss for Khan if he had fought the way he did against Collazo, because Khan is still unable to handle pressure without resorting to shoving, pulling down on his opponent’s head, and putting them in head locks. He needs to learn how to fight without resorting to those tactics.

Khan’s losses to Breidis Prescott and Danny Garcia were the result of him getting nailed by huge shots that he was unable to come back from. Even if Khan had fought the way he did against Collazo with the constant movement and wrestling, he’d still have gotten nailed both those fighters, and his chin would still likely have betrayed him.