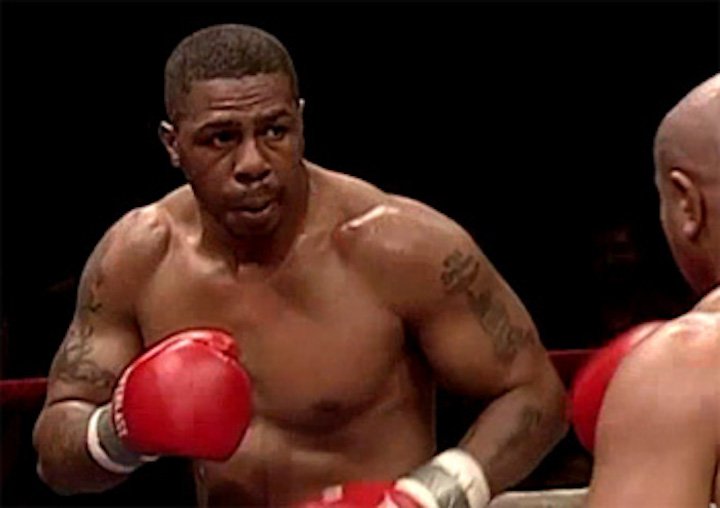 The term, roller-coaster career is a commonly used one yet it is wholly appropriate in describing the fun and largely exciting ring exploits skilled New York slugger Monte Barrett engaged in over his 18 years in the pro ring. Known as “Two Gunz,” Barrett, not an especially large heavyweight, would go down, get back up, give his all, and he would often follow up a poor performance with an impressive one; sometimes a career reviving one.

Today, retired for over six years, Barrett celebrates his 49th birthday. Leaving the ring with a hard-earned 35-11-2(20) record, Barrett has some storied career to look back on. Barrett faced no less than seven world heavyweight champions. But Barrett managed wins over only two of them. Indeed, though he gave it his all, Barrett fell short of winning the ultimate prize.

A while back, Barrett kindly listed the ups and downs of his career for this writer.

“I fought a lot of punchers, such as David Tua and Wladimir Klitschko. But the hardest puncher I fought was probably Nikolai Valuev. Don King told us we would fight in a far bigger ring than we ended up fighting in. We had trained to fight in a 20-foot ring, but on the night it was a 16-foot ring. My plan was to make him overextend and then I’d counter-punch; I’m a natural counter-puncher. But all my preparation went out the window with such a small ring. That was such a mentally tough fight. That was the first time in a fight where I had suffered a concussion. I went to the hospital and it was six months before I was back to normal.”

“I have three I want to list. My KO win over Tye Fields. My decision win over Dominick Guinn. My decision win over David Tua. I was the underdog my whole career. The win over Tua means a lot because I worked so hard for that fight and it all paid off. In the 12th round he knocked me down and he broke my jaw but I was able to get back up and carry on fighting. I went to New Zealand to beat Tua.”

“The loss to Odlanier Solis and the loss to Hasim Rahman. I took the Solis fight just for the money. I had only two weeks to get ready for that fight. The Rahman fight, I should never have taken. I had just beaten Dominick Guinn and I was in line for a title shot. I should never have fought Rahman, a friend of mine. I was way too emotional going into that fight. But though it was a bad night for me I still think I won the fight.”

Talk about the big fight you had with David Haye in the UK.

“In the Haye fight, the referee never gave me a break. It was an ugly fight, with us both hitting behind the head and on the break. But the referee told me, not him. Haye kept catching me as I was off-balance and off guard. His punches never really hurt me but I kept going down. I put him down, and Haye told me himself that I did knock him down. I was so emotional in that fight and I messed up. That was one fight where I’d have loved a rematch.”

Who are some of the best fighters you sparred with?

“I sparred Lennox Lewis, as he was getting ready for the Frans Botha fight. I also sparred Eddie Chambers, Malik Scott, Maurice Harris. Actually, the sparring with Lennox took a lot out of me. Every day we had a war in sparring. We beat each other up, both of us bleeding from the nose and mouth. My then trainer, Eddie Mustafa Muhammad told me they (Lewis’ team) wouldn’t let me stay around as it was too hard work for Lewis. Emanuel Steward told us we would do no more [sparring] after around 21 rounds that we had done.”

Do you enjoy retirement?

“I have no real regrets other than few fights I’d have liked to have fought over again. Otherwise I’m satisfied with my career. I took on everyone I had to fight and I have a lot of fans who I appreciate.”