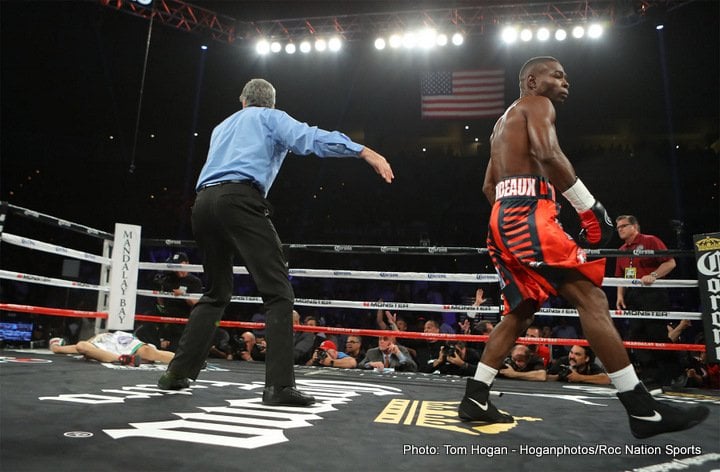 As fans may recall, super-bantamweight king Guillermo Rigondeaux left his unbeaten mandatory challenger Moises Flores in a heap after just three minutes of action on the Andre Ward-Sergey Kovalev rematch card in Las Vegas on June 17 – the big left hand that inflicted the damage coming a split second after the bell had sounded to end the opening round of the 122 pound title fight.

The gifted Cuban, often labelled boring and, ironically, incapable of scoring KO’s, denied any intentional wrongdoing, yet Mexico’s Flores claimed otherwise, stating how it is his belief that Rigondeaux waited until he dropped his hands and then lowered the boom. It seems the officials agree with Flores, as the result has been changed, officially yesterday, and the KO win is now in the books as a no decision.

A rematch is now of course extremely likely, and really the only fair thing to do is to get these two fighters back in the ring as soon as possible. In all likelihood, Rigondeaux was going to win the first fight anyway, even though we were only a round into the action, but it might have shaped up as a good fight. The rematch, if, or when, it takes place, might attract quite a bit of fan attention due to what happened at the conclusion of fight-one.

Controversy, as we know, sells, and both fighters deserve a chance to settle their differences. Rigondeaux, now 17-0-0-1(11) may not be at the top of many fans’ favourite fighters lists, but he is high up in the majority of pound-for-pound lists. And say what you want about the 36 year old boxing master, he sure wasn’t boring in the brief tussle with Flores. Maybe the controversy surrounding this fight will help Rigondeaux’ profile.

But will the rematch be an under-card bout, or should Rigondeaux-Flores II headline a card this time around?