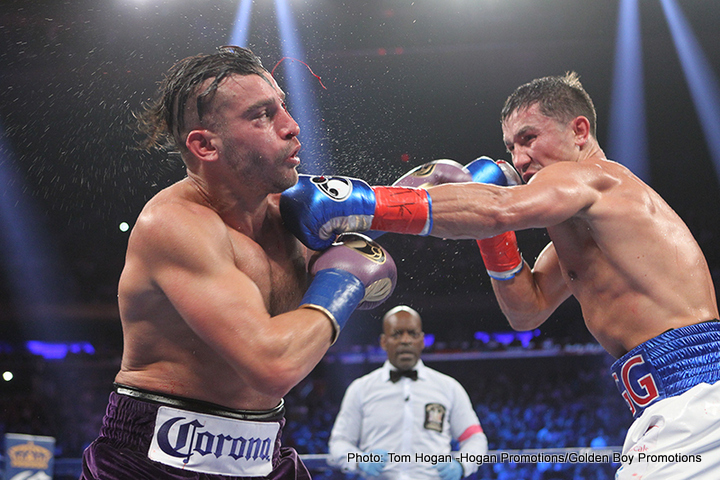 IBO/WBA middleweight champion Gennady “GGG” Golovin (34-0, 31 KOs) defeated IBF 160lb champ David Lemieux (34-3, 31 KOs) tonight by an 8th round TKO in their unification fight at Madison Square Garden in New York. Golovkin battered Lemieux in the 8th round with head and body shots until the fight was stopped by referee Steve Willis at 1:32 of the round.

Lemieux had been hurt by a body shot moments before the stoppage, and he was virtually defenseless against the ropes. Three rounds earlier, Golovkin knocked Lemieux down with a body shot in the 5th round. While Lemeiux was on one knee, Golovkin hit him with a head shot. Fortunately for Lemieux, Golovkin didn’t put everything he had in the shot otherwise the fight would have ended right there.

Lemieux was in denial about the stoppage, as he felt that he still OK and able to fight on. Lemieux also thought that some of the rounds were close. They weren’t. It was target practice for Golovkin with him nailing the short-armed Lemieux with jabs all fight long. Golovkin didn’t really start throwing power punches until the 3rd round. He was playing it safe up to that point.

“There were some rounds that were pretty close,” Lemieux said afterwards while being heavily booed by the Madison Square Garden crowd. “I was just waiting to connect. I’m not too sure about the stoppage. I could have continued. I’ll meet him in the future. I want things to be settled in the near future. There were shots that I took too long to throw. I’ll give him the respect, but hopefully in the near future I’ll get my chance again,” Lemieux said.

In the co-feature bout, WBC flyweight champion Roman “Chocolatito” Gonzalez (44-0, 37 KOs) gave challenger Brian Viloria (36-5, 22 KOs) a bad beating in stopping him in the 9th round. Like in the main event, the fight was halted after Gonzalez trapped Viloria against the ropes and flurried on him until referee Benjy Esteves Jr. stopped the contest at 2:53 of the round. Viloria could have continued fighting, but he was just going to continue to take a beating. He likely wouldn’t have lasted too much longer. Viloria’s face was bruised up around both eyes, and he looked in bad shape.

In the 3rd round, Gonzalez knocked Viloria down with a short right hand to the head. The punch was thrown right at the same time that Viloria was throwing a right hand of his own. Gonzalez’s shot was thrown perfectly and it sent Viloria straight down.

Unbeaten heavyweight contender Luis “The Real King Kong” Ortiz (23-0, 20 KOs) chopped down Matias Ariel “El Matador” Vidondo (20-2-1, 18 KOs) in defeating him by a 3rd round knockout. Vidondo was knocked down in the 2nd and 3rd rounds. The fight was stopped after Ortiz dropped Vidondo with a right hand to the head. The time of the stoppage was 0:17 of the 3rd.