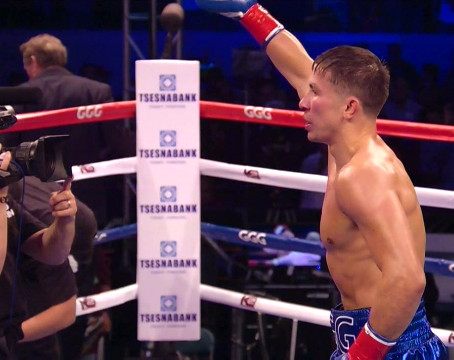 His cornermen were justifiably concerned, but Walters assured them he was all right. He later said his head cleared on the walk back to his stool. That was The Flashes’ last real threat. From then on Walters controlled things with his hard jab, which set up his combinations. For most of the fight, he was the aggressor. He had Donaire circling, much of the time off balance. He couldn’t get away from Walters jab, followed by good combinations.

Nonito’s punch count was less than half of Walters, and most of his missed or were blocked. When he tried to throw hard shots, he wasn’t set properly and would spin out of balance. Walters remained solid and strong, which allowed him to get off good, punishing combinations. Walters was just too big and strong for The Flash, who had moved up in weight. For the first time in his career, Donaire went down in the third round from a right uppercut. He beat the count, but definitely was shook up by the punch.

Back in his corner, he was cautioned about getting too close to Walters. But, the truth was it didn’t matter. Donaire was getting beat in close or from a distance. Walters continued the beat down, and in the sixth round, he got through with a hard right to the left side of Donaire’s head. It wasn’t a temple shot, but high and more toward the back of the head. The end officially came at 2:59 of the sixth round. Donaire was gracious in defeat, stating what everyone already knew, and that was Walters is a pretty damn good fighter. Donaire wisely said he and his wife and family will have to carefully weight his options. One thing he was sure about, if he continues fighting, it won’t be in the featherweight division.

In the main event, Gennady “GGG” Golovkin annihilated Marco Rubio, who came in 1.8lbs over weight. Strange for a man about to have the biggest fight of his career. That’s three of Robert Garcia’s fighters who haven’t made weight: his brother Mikey, Brandon Rios, and now Marco Rubio. Robert shrugged it off when HBO’s Max Kellerman pointed it out. He said it happens lots of times. He said fans hear a fighter missed making weight by a couple of pounds. What they don’t know is the fighter dropped 15 lbs a few days earlier. Doesn’t sound like a good plan, but we’ll let Robert work that one out.

The fight began as expected. Rubio tried to establish some kind of jab, and GGG, blocked, slipped and countered, as he continued to close the distance. The first excitement occurred when GGG landed a good right hand, but Rubio came right back with his own combination. A possible hint at Mexican Style?

Nah, no such luck. In round two, GGG got the distance he wanted and fired off hard combinations, going to both the head and body. GGG is a master at setting up his opponents for the hard one. He first distracts them with a tap heard a tap there, followed by a zinger. Rubio was victim to one such disturbance, when GGG distracted him with a light left to the head, followed by a crunching right uppercut. Sensing Rubio was ready for the kill, he stayed on him, firing off hard shots, both up and down.

Rubio still had the good sense to cover up, but he was moving along the ropes, unable to escape. GGG slid in close, but Rubio had a tight guard. GGG threw taps to the body and when Rubio leaned in and down, GGG looped a hard left hook over the top, which bounced off Rubio’s noggin and down he went.

He didn’t go straight down though. It was more like three stages. First, he was almost in a sitting position, then on his side, and finally on his back. Referee Jack Reiss moved and gave the count in Spanish. Rubio’s eyes seemed alert, but he wasn’t moving like he realized the expediency of the matter. When Reiss reached ten, Rubio was still on his way up. Hence, Reiss had no choice but signal the fight was over.

As happens all too often with fighters, they exhibit a shocked expression, when all along they know the truth of the matter. They didn’t beat the count and neither did Rubio. Regardless, as Max Kellerman said, “It was academic”. If he would have beaten the count, in short order he would have been down again.

That’s eighteen straight knockouts for Triple G. His fan base keeps growing, and so does his ability to pressure belt holders into to fighting him. He expressed a preference of fighting Miguel Cotto, but he quickly added that he would fight Saul Alvarez or Julion Cesar Chavez, Jr. Kellerman threw in Froch and Ward, and GGG nodded in agreement that they would all be good fights.

According to Jim Lampley, Andre Wards’ representative (an attorney?) said Andre was willing to fight Golovkin. Triple G might want to hold off on that one for a while. Andre Ward would be one huge step up for him, not only in size, but in talent. He knows every trick in the book, and probably added a few. Hard puncher? That’s no problem for Andre. He managed to nullify the likes of Carl Froch, Alan Green, Arthur Abraham and Mikkel Kessler. What about GGG’s 395 victories in the amateurs. Andre’s got the Gold pedigree too. Triple G should heed the warning signs, use a little discretion