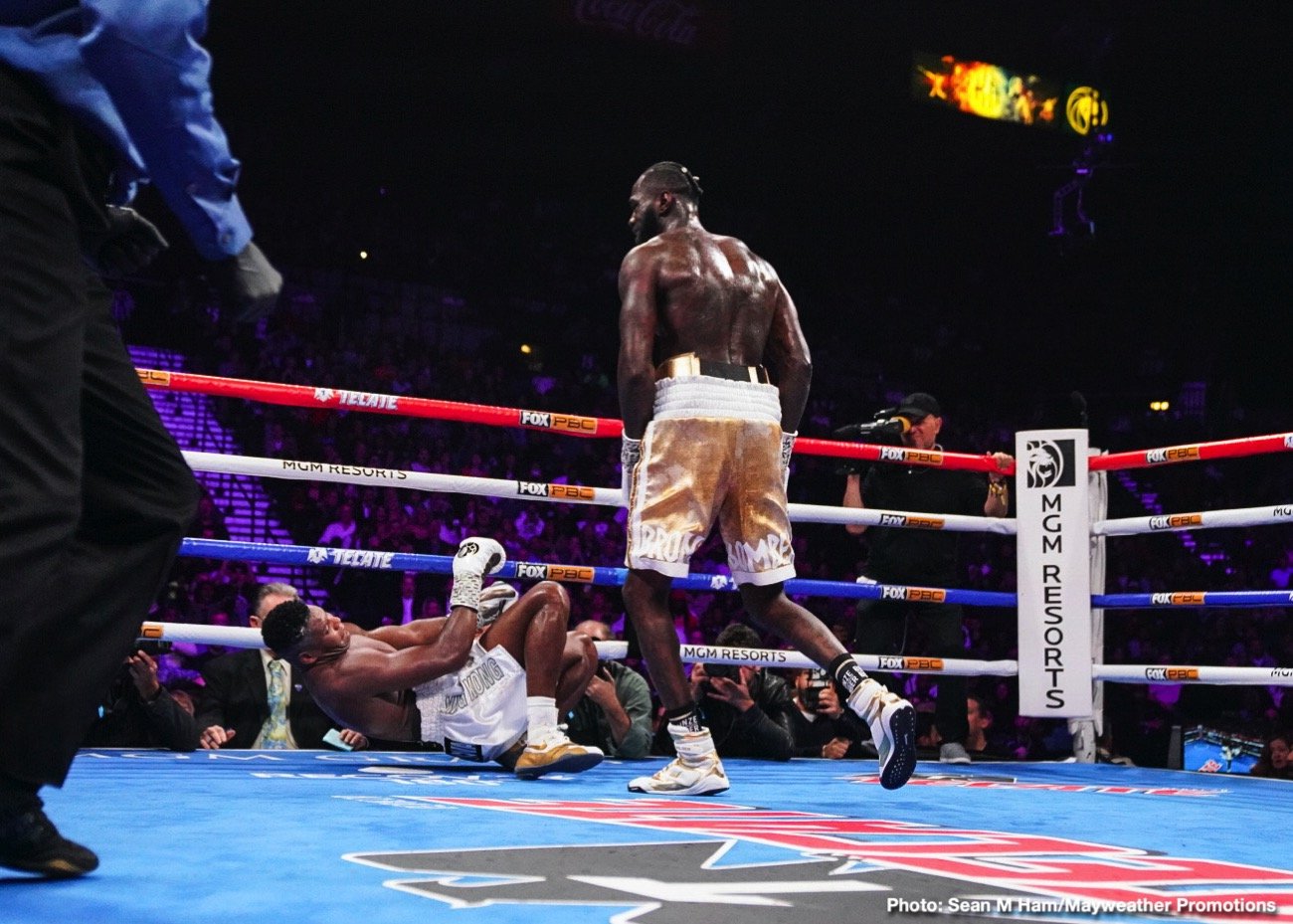 And your guy is going in with this monster next!

The headline quote from Tyson Fury’s head trainer, Ben Davison makes quite the claim, doesn’t it? Yet Davison is not alone in his praise of Deontay Wilder, or rather his praise of Wilder’s withering punching power. At 42-0-1(41) and holding the distinction of having knocked down every single man he has ever stepped into the ring with, Wilder is a true phenomenon.

Critics point out Wilder’s ungainly style, his “poor boxing ability,” his rawness. Yet this, along with the fact that, for a big man, Wilder is skinny and has a thin neck and thin legs (according to the old-timers, this combo a sure-fire recipe for disaster for a heavyweight) is part of Wilder’s mystique as such a venomous puncher – he really is in a category all by himself. And as has been pointed out before now, if he’s so “poor,” so lacking in defence, so raw, then why has no-one beaten Wilder yet?

Fury of course came closest, outboxing Wilder for long periods but also getting decked twice; the second time, in the 12th and final round of their December 2018 battle, astounding us all by getting back up when seemingly flat on his back and out for the count. But if Fury gets hit like that again, in the February rematch we all hope goes ahead as scheduled, without a hitch, will he be able to pull another miracle and regain his feet? Fury doesn’t want to find out, neither do his team members. They know full well how lethal Wilder is.

So it will be box, box, box in the return, with Fury, perhaps sharper and fitter than he was in the first fight (having been out for so long, having piled on so much weight, having battled so many inner demons) aiming to do what he nearly did the first time and win a decision. But can he do it? It’s a fascinating question, and the rematch between these two fighters with totally different fighting styles and personalities is arguably the most fascinating world heavyweight title fight rematch out there today (more so even than Andy Ruiz-Anthony Joshua II).

A classic Boxer Vs. Puncher match-up, we fans simply cannot wait to see the sequel between the WBC ruler and the proud claimant of the lineal crown.

But for now, Wilder is asking for, and getting, his just dues as a special kind of puncher, a very special, arguably unique kind of puncher. Davison was asked, as quoted by Yahoo! Sports, if Wilder is “up there” in terms of the hardest-hitting heavyweights ever…

“Up there? He’s the biggest puncher not just in heavyweight history, but in boxing history,” was the trainer’s reply.

This is of course an opinion only, and one many fans will no doubt care to debate (Julian Jackson, Earnie Shavers, Thomas Hearns, and so many more monster punchers at their disposal in terms of an argument). But Wilder is winning over the experts, punch by punch, fight by fight. If he can flatten Fury for keeps next February, these lofty claims will only increase.

So How Great Was Wilfredo Benitez? 45 Years Ago Today He Made History
Follow @eastsideboxing