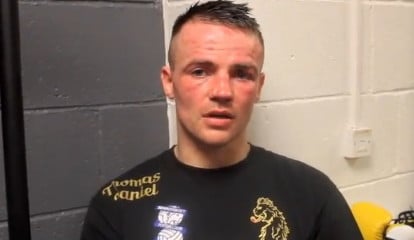 After 8 years as a pro, Frankie Gavin (25-3, 15 KOs) is in a position to finally win a world title when he faces 35-year-old Bethuel Ushona (36-5-1, 9 KOs) for the vacant IBO welterweight title on February 23 at the Genting Arena in Birmingham, UK.

Gavin, 32, fought for a world title 2 years ago against former IBF World welterweight champion Kell Brook in 2015, but he ended up losing the fight by a 6th round knockout.

Gavin had high expectations when he turned pro in 2009. Unfortunately, Gavin’s career has not gone as well as expected with him losing to Leonard Bundu in 2014, Kell Brook in 2015, and Sam Eggington in 2016. The defeat to Eggington was a real surprise, as Gavin was supposed to win that fight. The combination of Eggington’s youth, size and work rate wore Gavin down until the fight was halted in the 8th round. Gavin was knocked down in rounds 3, 6 and 8. It was a crushing blow to Gavin’s career. He chose not to retire from boxing despite many fans telling him give up. Gavin came back and he’s won his last 2 fights in beating journeyman Renald Garrido and Felix Matamoros. Gavin looked good in those fights. He showed that he still has a lot left in the tank at 32.

Ushona has been a pro since 2002. He has losses to Jan Zaveck, Denton Vassell, Dario Fabian Pucheta, Saky Shikukkutu and Rafael Jackiewicz. Ushona only loses to good fighters. He beats the marginal opposition without any problems. Ushona’s best wins of his career have come against Kaizer Mabuza, Isaac Hlatschwayo and Philip Kotey.

Gavin should have enough to get past the 35-year-old Ushona. He’ll just need to deal with his height. Ushona isn’t a big puncher or a high volume guy.

It’ll be interesting to see Gavin crowned as a world champion for the first time. He’s long overdue for that honor.