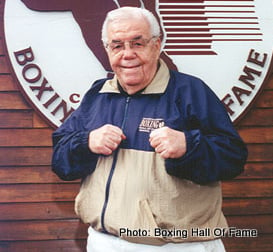 Lou Duva was born on May 28, 1922 in New York City to Italian immigrants, and the family later moved Paterson, New Jersey.

Duva and his family built the promotional company Main Events (founded in 1978) into one of boxing’s powerhouses. Duva was voted “Manager of the Year” in 1985 by the Boxing Writers Association of America. In 1987, the World Boxing Association chose Duva as “Trainer of the Year.”

“The overwhelming number of calls and sympathy wishes from so many friends and associates shows how much our father was loved and respected. We sincerely appreciate the support from everyone.” said Dino Duva
These are the wake and funeral arrangements:

Flags At Half-Staff For Lou Duva

“Lou Duva was fiercely devoted to his fighters and to the sport that he dedicated his life to,” said Hall of Fame Executive Director Edward Brophy. “Everyone at the Hall of Fame joins the boxing community in mourning his passing.”

Born on May 28, 1922 in New York, Duva moved to Paterson, NJ as a child. He committed his life to the sweet science and as a manager / trainer he worked with such world champions as Mark Breland, Bobby Czyz, Livingstone Bramble, Meldrick Taylor, Michael Moorer and Hall of Famers Evander Holyfield, Pernell Whitaker, Mike McCallum and Arturo Gatti. Duva received the “Manager of the Year” Award (1984) and the “Long and Meritorious Service to Boxing” Award (1993) from the Boxing Writers Association of America. The WBA named him “Trainer of the Year” in 1987 and 1994. In 1977 the Duva family started the promotional company Main Events.

In 1998 Duva was elected into the International Boxing Hall of Fame.