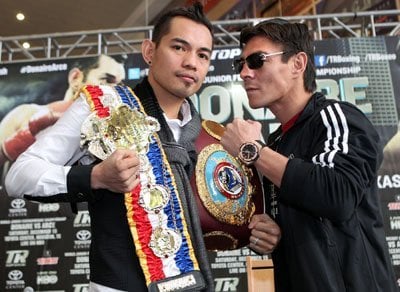 by Steve Lopez– Photo: Chris Farina – Top Rank- The stage is set for Saturday’s Jr. Featherweight showdown between highly favorite WBO Champion Nonito “Filipino Flash” Donaire and Jorge “Travieso” Arce. Wednesday marked the final press conference where fighters addressed the members of the media and to reinforce what to expect in their performances. The co-featured bout will feature Cuba’s up and coming rising star Guillermo Rigondeaux against Thailand’s Poonsawat Kratingdaenggym.

To show boxing’s global presence with fighters and fans, Wednesday’s conference featured a rather interesting mix of fighter backgrounds: Mexico, Cuba, Thailand and the Philippines. It was no surprise that each fighter, with the exception of Donaire, required a translator to get their points across. I had the privilege to attend the conference and captured some visuals and quotes from each fighter:

Guillermo Rigondeax was a man of few words ready to fight.

“Nothing much to say. We’re ready to get this going.”
“I want to thank everyone for being here. There’s nothing to say at this point in time. Just get in the right and fight.
“It’ll be a great fight for me and a great show.”

Jorge Arce wants to keep the Mexican party going for one more week.

“I’m very excited because this will be the best fight of my life.”
“I don’t want to say anything about who’s going to win. Don’t want to make any predictions or promises to anyone. I just promise a great fight.”
“Donaire is a friend of mine. I admire him. I respect him. Because of the respect and admiration, I’ve prepared like never before.
“What happened with Pacquiao and Marquez last Saturday is going to happen again. The new surprise!”

Nonito Donaire took the podium last to address the media and fans.

“One thing that Arce and I both agree on is that the fight will not go the distance.”
“December 15th is going to get hot in here.”

To reiterate the international theme for the main event fights, Bob Arum casually and jokingly said in between the Poonsawat and Rigondeaux introduction and comments:

“This is great. I bring the fighters up here to talk and neither of them can understand each other.”

HBO Sports rings in the holiday season with an action-packed doubleheader from deep in the heart of Texas when WORLD CHAMPIONSHIP BOXING: NONITO DONAIRE VS. JORGE ARCE AND GUILLERMO RIGONDEAUX VS. POONSAWAT KRATINGDAENGGYM is seen SATURDAY, DEC. 15 at 9:30 p.m. (live ET/tape-delayed PT), from the Toyota Center in Houston, exclusively on HBO. The HBO broadcast team of Jim Lampley, Larry Merchant and Roy Jones Jr. will be ringside for the event, which will be available in HDTV, closed-captioned for the hearing-impaired and presented in Spanish on HBO Latino.