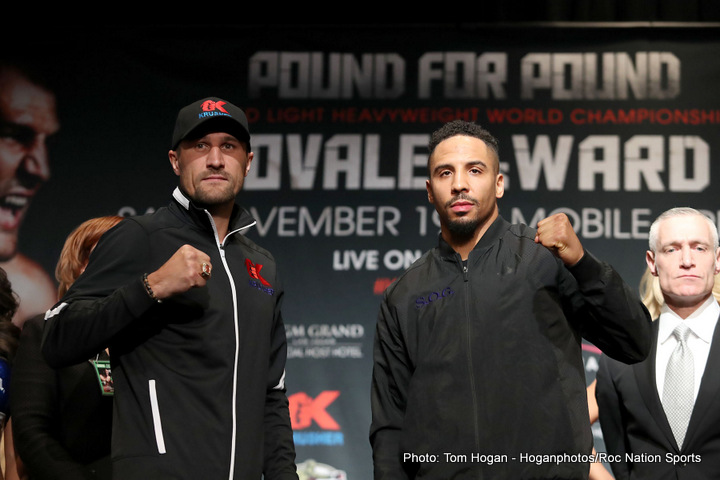 Andre Ward – You are a family man and a very private person. How does that help you to prepare for a fight? Do you go away from your family to train? How do you deal with the distance and being away from family?

“I’ve been going away for training camp since 2002. It’s a concept that Virgil [Hunter] brought to me way back then. At the time, I didn’t understand what it was about. We had two young children. If I was working hard why did I need to be isolated? Virgil explained to me that every little thing outside of the ring pulls away from your energy inside it. Today, I can see why it’s a benefit. It gets me in the right frame of mind for what I’m trying to accomplish. It prepares me to go to war.”

What would you do different in the second fight? Do you think you need to make changes and what are they? You dropped Ward in Round 2 but couldn’t finish him. Does that play in your head?

“Nothing plays in my head except that this time I will be the winner at the end of the fight. You saw the first half of the last fight, I won those rounds easy. In the later rounds I was very tired, I ran out of gas. For this fight I am training correctly. Last time I trained too hard. This camp I will do everything that I usually do when I train but I will not do it as much. I am training very smart this time. My training camps are usually very successful, as well as my fights. I went back to what has worked for me in the past. On June 17 I will be prepared to get my belts back.”

Ward vs. Kovalev 2 takes place Saturday, June 17 at the Mandalay Bay Events Center in Las Vegas and will be produced and distributed live by HBO Pay-Per-View beginning at 9:00 p.m. ET/ 6:00 p.m. PT.

Fight Bites: Andre Ward & Sergey Kovalev Look Back and Ahead

“I want to leave no doubt, but I don’t need any extra push of motivation. It is always lurking inside me, I carry it wherever I go.”

How hard was to deal with the defeat after you thought you’ve won the first fight against Andre Ward? How have you use that as motivation for the rematch?

“When they first announced the winner I could not believe it, it felt like I was in a bad dream. I believe that I won the fight. But as much as I would like to change what happened I know that I cannot do this.

“I have come to accept this is what happened and I am now even more determined to do everything in my power to make sure I do not leave the decision in the hands of the judges. Last time the judges gave him a gift of my belts. I cannot rely on the judges to get it right the second time. I am going to get my belts back. I have to make sure to either knock him out or win in a very convincing way.”

Ward vs. Kovalev 2 takes place Saturday, June 17 at the Mandalay Bay Events Center in Las Vegas and will be produced and distributed live by HBO Pay-Per-View beginning at 9:00 p.m. ET/ 6:00 p.m. PT.

HBO Sports to replay Kovalev vs. Ward I 2016

Leading up to the highly anticipated light heavyweight rematch between Andre Ward and Sergey Kovalev – set for Saturday, June 17 and presented live by HBO Pay-Per-View® – HBO Sports will present the exclusive replay of their first showdown which sparked a hot debate in the boxing community as the hard-fought encounter resulted in a razor-thin triumph for the undefeated challenger from the Bay Area.

On Friday, June 9 at 12:45 a.m. (ET/PT) and Saturday, June 10 at 9:00 a.m. (ET/PT), HBO2 will replay Kovalev vs. Ward I 2016. Last November in the bright spotlight of Las Vegas, Andre Ward won a hotly debated unanimous decision against the reigning 175-pound champion Sergey Kovalev in the most anticipated fight of 2016. After suffering an early knockdown, Ward rebounded in the second half of the fight with an incredible display of will and skill that the judges decided was the difference. Now the question is which fighter is more determined to impose his will in the rematch?

The fight will also be available 24 hours a day to HBO NOW, HBO On Demand® and HBO GO® subscribers and on affiliate portals beginning Monday, June 5.

Ward vs. Kovalev 2 takes place Saturday, June 17 at the Mandalay Bay Events Center in Las Vegas and will be produced and distributed live by HBO Pay-Per-View beginning at 9:00 p.m. ET/ 6:00 p.m. PT