Former top-ranked heavyweight and former WBO NABO heavyweight champ Jeremy Williams will box all-time great James Toney on October 23. Fans may groan that his is yet another ‘freak show’ or ‘celebrity’ bout, but 49-year-old Williams is under no illusions regarding reviving his career or trying to launch another world title assault.

Williams, 43-5-1(35), says he is merely looking at putting on an entertaining show for the paying fans when he gets in there with Toney – a man he has known and respected for years.

Here, Williams kindly takes the time to speak with ESB:

Q: The fight with Toney, it’s a definite?

Jeremy Williams: “Yes, it’s on. Unless he pulls out, but I don’t think James is that kind of guy.”

Q: How did the fight come about?

J.W: “Some names came up, and James was offered my name, and he said, ‘Yeah, I’ll fight him!’ And I said sure, no problem. James will be one of the only men I’ve ever fought who is shorter than me.”

Q: As you know, these big-name exhibition bouts are all the rage right now – for good or for bad. I guess you saw the Holyfield thing on Saturday?

J.W: “Yeah, I saw the Holyfield fight; it was disgusting. And these Jake Paul fights, where a guy with a few fights thinks he can take on a real-world champion, and when he goes the distance with him (Floyd Mayweather), he thinks he’s done something. It’s ridiculous to me.”

Q: So your fight with Toney, is it a real fight, or is it an exhibition?

J.W: “We have six rounds, two-minute rounds; it’s an exhibition. I believe we will wear 14-ounce gloves. For me, I’m just going to have fun. It’s not like I’m gonna go from this to a world title fight – I’m done. I’m enjoying my retirement. I’m just enjoying the moment to get back out there. My career is behind me, but my entertainment career is in front of me.”

Q: Have you and Toney ever sparred in the past? 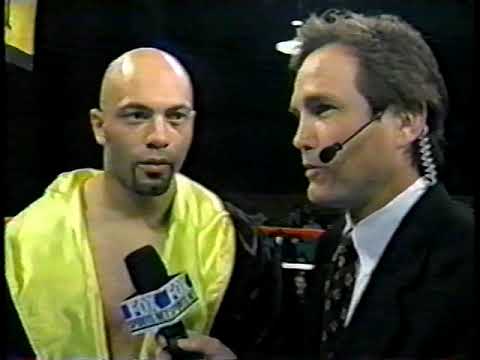 Q: What will the fans get when you two fight?

J.W: “If he wants to be cool and put on a show, we won’t be trying to knock each other’s heads off. You know, we’ve done that already. I’m looking at this as a fun time. I was a boxer first; then I became a puncher; I got addicted to my power. I really liked the idea of knocking someone out and taking it out of the decision of the judges. Now, I’m not going to make a run for a world title after this; I just want to give people what they’re paying for, which is a good show. It won’t be like that Holyfield thing, where he just got clipped, and he was done in the first round. Who wants to see that? No one wants to see a legend go out like that.

Q: You certainly scored some quick KOs as a heavyweight. Is there a weight limit for the Toney fight?

J.W: “I don’t think so. He’s a good 260 – 275 pounds right now. I’m going to box him, show him my skills. I don’t need to knock him out or beat the brakes off him. I’m good; I don’t have to prove a point. This is entertainment. The guy’s an 18-time world champion! I have respect for him, and I hope he has respect for me. He may not be the best person in the world, but his career defines him as one of the greatest in our sport.”

Q: Will you perhaps do more exhibitions after this one?

J.W: “Yeah, I think so, Shannon Briggs has one coming up, and he’s asked me to help him with it. I’ve known Shannon since I was 14 years old. We do this for money; we don’t do it for free. The biggest pay-cheque wins.”

J.W: “I do. I’ve been in the sport my whole life. So for me to just sit around and do nothing, it just wouldn’t be fulfilling. I need to break a sweat. It sounds crazy, but I need to get punched in the face every once in a while to get my head right.”

Q: Looking back at your career, who would you say was the best guy you ever fought?

J.W: “Skill-wise, maybe Maurice Harris. He caught me on the wrong day, and he beat the brakes off me! He just beat me up all night, and there was nothing I could do about it. I’m not a quitter, so I didn’t quit. I took an ass-kicking that night. I fought a bunch of good fighters, tough guys.”

Q: You beat Bert Cooper by DQ. What happened?

J.W: “I kept hitting him in the body, and he would spit his mouthpiece out. That was a really smart learning fight for me. I would hit him real hard in the body, and he’d spit his mouthpiece out. That was a real educational fight for me. But like I say, I should have been fighting cruiserweight. I should have fought Orlin Norris, Bobby Czyz. And the English guy who boxed with Kronk, he was f*****g tough as hell, man! Dennis Andries, we sparred, and he beat the brakes off me. I was 17.”