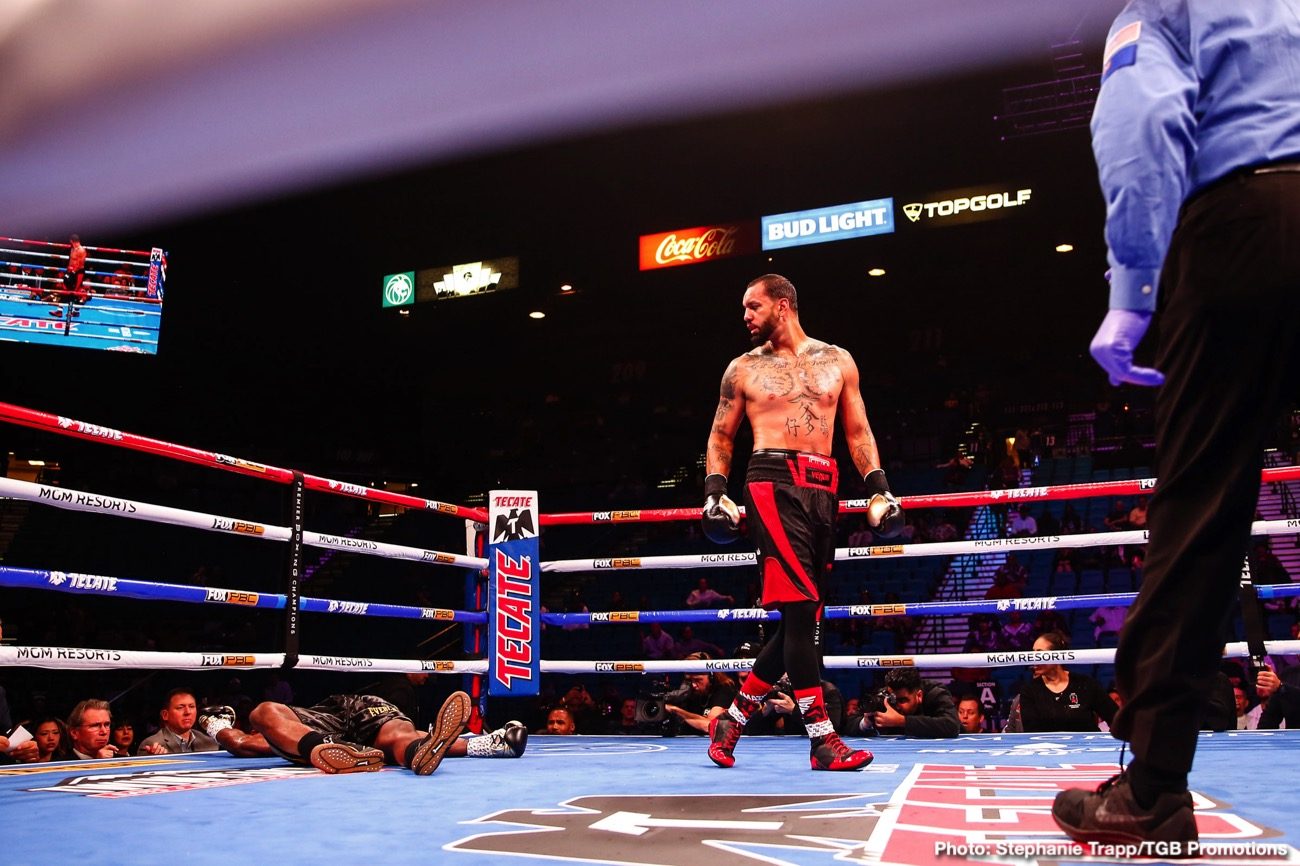 MMA fighter turned boxer Dustin Long of Tennessee scored a big upset on this past Saturday night’s big card in Las Vegas. Knocking out Marsellos Wilder, brother of WBC heavyweight champ Deontay, Long gave us a highlight reel KO. The 37 year old, who improved to 3-1-2(3) with the fourth-round KO, is now hoping to feature on the under-card of Wilder’s next fight, against Tyson Fury.

Here, the easygoing Long talks about his win and his career with Eastside Boxing:

Q: Congratulations on your big and explosive KO win over Marsellos Wilder. You upset the odds.

Dustin Long: “Yes, thanks. It was definitely the biggest opportunity for me in boxing. We actually tried to get the fight in October but they never signed the contract so I thought I wouldn’t get it. But then, and a shout out to my man Nate Torres, he got me the fight, I had ten days to get ready. It was a big opportunity, my first fight in Las Vegas, and I wasn’t gonna embraas myself on TV. I was nervous, no doubt. My nerves were all over the place (laughs) – seeing Lennox Lewis, T.M.T fighters, the big arena; me coming from a small town. I had watched a thousand fights at The MGM but I never dreamed I’d ever fight there. But as soon as I got to the weigh-in, my nerves went away.”

Q: You handled the event very well. You were obviously confident you could beat Wilder?

D.L: “We knew he would be physical, athletic, but like me he hasn’t got a lot of experience. So in terms of me being the B-side, it was an even fight in terms of us both not having had a whole lot of fights. He had the big name but we were evenly matched. But after the fight, going home, I was really tired. I enjoyed the whole event but when I listened to the commentators on our fight, and they were saying I wasn’t throwing enough punches, I was thinking, what do you want me to do on a ten-day camp, throw a thousand punches and fall over with exhaustion!”

Q: It’s early days, but what next for you? You have fought MMA and boxing of course.

D.L: “I think boxing suits me better. It’s not that it’s an easier sport [than MMA] and I hate to compare the two sports. But the training for MMA, especially at my age of 37, with the wrestling, the Muay Thai, the boxing training I can get through a camp easier; it’s easier on the body. There is a possibility I could fight again in December on the [Jermall] Charlo under-card (on Dec. 7th). I’m focused on my boxing now.”

Q: What was your MMA record? And you have lost once in boxing?

D.L: “I was 8-3 in MMA. Yeah, I was stopped by Scott Sigmon in boxing. I was stopped in the eighth-round. I entered that fight without one win in the ring, whereas he’d had over 30 fights, a lot of experience. I also underestimated the ten-round distance and I got tired. It was more a case, that fight, of me telling myself, ‘yeah, I can do this.’ But with a full training camp, I know I can beat him. If I do lose the rematch, with full training, I can live with that. We have spoken about a rematch, there is no bad blood between us. That would be the most meaningful fight for me next I think.”

Q: The offers may well come in for your next fight now. Would a return with Wilder be of interest, or maybe you fighting on another Deontay Wilder card?

D.L: “Both options appeal to me. I want to fight again ASAP. I’m back in the gym and I want to stay busy. I’d love to fight on Wilder’s under-card again, he’s one of my favourite fighters. To be able to fight on the Wilder-Fury rematch card would be a dream come true.”

Q: You will stay at cruiserweight?

D.L: “Yeah, I think so. I feel comfortable at cruiserweight, I fought at 185 pounds in MMA. I ain’t gonna go messing with any of those 250 or 260 pound heavyweights (laughs). But I’m not saying I won’t fight at heavyweight, I did have one fight up at heavyweight. I’ll have to see what offers I might get.”

Q: How do you see the two big heavyweight rematches going: Ruiz-Joshua II and Wilder-Fury II?

D.L: “Ruiz, I think he’ll do it again. I don’t think it was a fluke, the first fight. He has those fast hands, he’s got a whole lot of amateur experience. He has those great counter-punches and he has a whole lot of pop in his punches. The Wilder-Fury rematch, I really can’t pick a winner. Fury to me is the better boxer but as Wilder said on Saturday at the press conference (after the Ortiz win) – fighters who fight him have to be perfect for a full 36 minutes, whereas he only needs to be perfect for one-second. So who knows, Fury could shut him out and win all 12 rounds, or Wilder might catch him with a massive shot and wipe him out in the first round.”