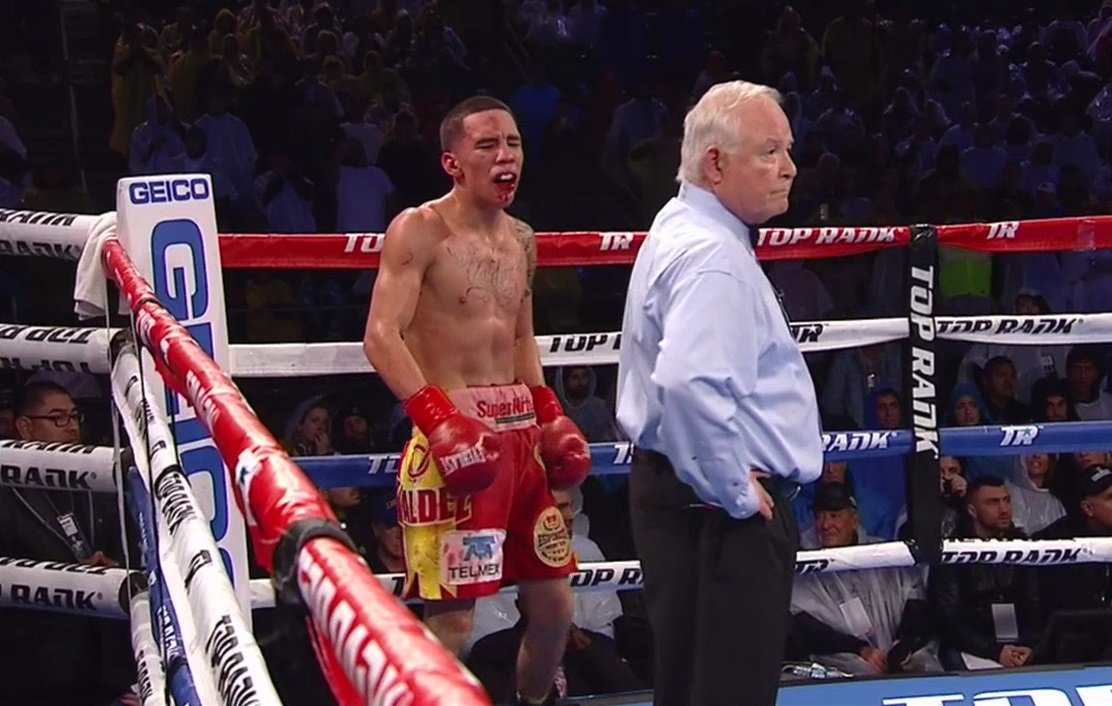 Last night’s Top Rank on ESPN saw Oscar Valdez (24-0, 19 KOs) retain his WBO featherweight title against Scott Quigg while fighting under a canopy at the rainy StubHub Center, the famed outdoor boxing venue in Carson, Calif. south of downtown Los Angeles. The telecast includes two of 2018’s top five highest-rated fights on cable television in 2018, according to preliminary audience results from Nielsen. The Valdez vs. Quigg world championship fight aired live and exclusively on ESPN and ESPN Deportes and streamed live on the ESPN App.

It was a bloody, back-and-forth fight, but Oscar Valdez dug deep – overcoming a fractured jaw – to score a unanimous decision by scores of 118-110 and 117-111 2X over Scott Quigg on Saturday night at the StubHub Center.

Valdez (24-0, 19 KOs) successfully defended his WBO Featherweight title for the fourth time. After the fight, he was taken to Harbor-UCLA Medical Center for observation.

Despite the rain, fans braved the elements and were treated to another StubHub Center classic, the venue former world champion Timothy Bradley dubbed “The War Grounds.”

The next Top Rank on ESPN is this Saturday, March 17 and features top-rated contenders José Ramírez and Amir “Young Man” Imam fighting for the vacant World Boxing Council (WBC) super lightweight world title. Ramirez vs. Imam will headline a St. Patrick’s Day at The Hulu Theater at Madison Square Garden.  The event also features Irish Olympian Michael Conlan (5-0, 4 KO’s), from Belfast, who begins his sophomore professional year exactly where he started his freshman year — at The Garden. The Ramirez vs. Imam world championship event will live and exclusively at 8 p.m. ET on ESPN and stream live on the ESPN App at 6 p.m. ET.