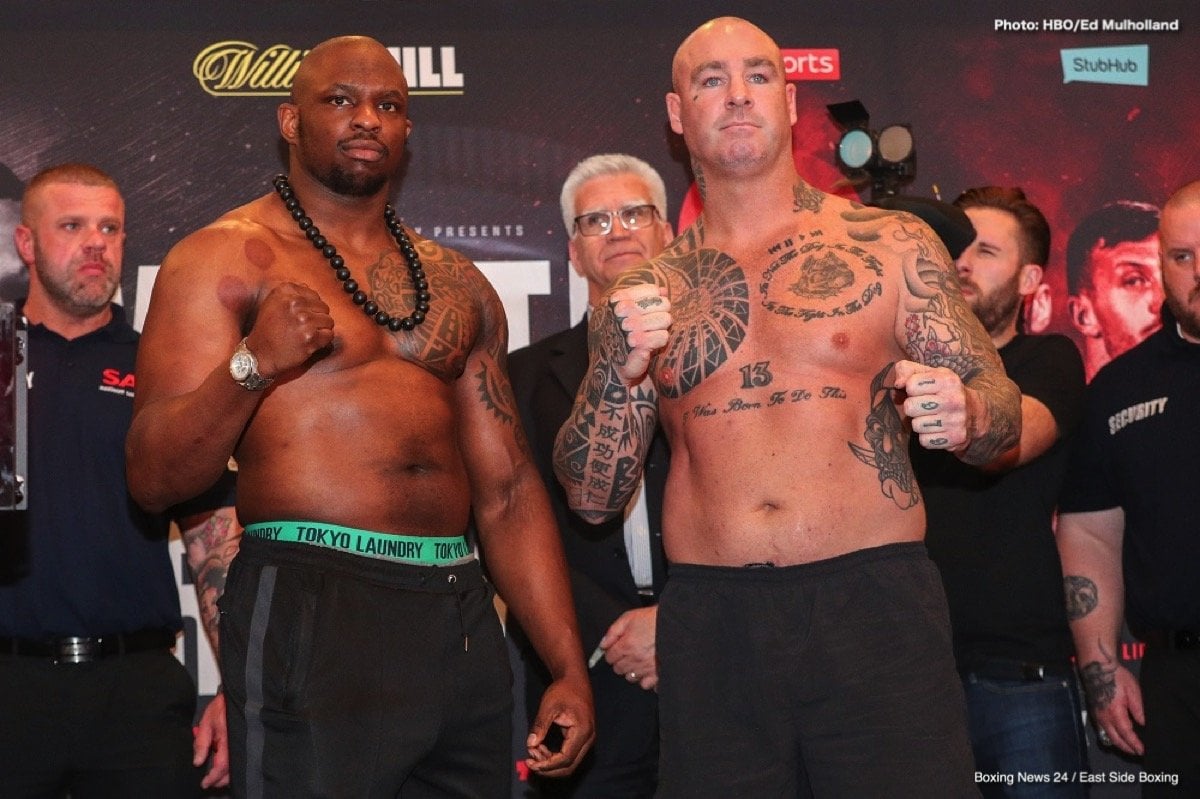 Dillian Whyte takes on unbeaten Lucas Browne in an important heavyweight bout live on Sky Sports and HBO, from the O2 Arena in London, England. The combination of power punching and being focused on a crucial moment of each man’s career will likely add intensity to Saturday’s headliner.

Dillian Whyte has come a long way as a professional prize fighter and now stands a victory away from earning a mandatory shot at Deontay Wilder’s WBC heavyweight belt. Lucas Browne got in to the sport of boxing at a late stage of an athlete’s career span, age 30. Both men flirted with other combat sports but decided boxing would be their best option. Wise chose as they approach this Saturday night as if it’s a do or die situation, or at least that’s what fans hope anyway.

Before Dillian Whyte entertained the thought of a boxing career, the man who went by the nickname of ‘The Body Snatcher’, was a very successful kickboxer. He finished with a 20-1 record, toyed with the idea of MMA, but ultimate chose the sweet science.

As fate would have it, Whyte had his first amateur bout in 2009 against none other than Anthony Joshua, whom at the time was a late to the boxing game, development project. Whyte would beat Joshua, knock another opponent out cold, and eventually turn pro earlier than expected due to issues stemming from his professional kickboxing career bumping heads with the ABA.

What began as a dream in 2011 came full circle, when Whyte met Anthony Joshua at the pro ranks in 2015. Prior to their first meeting, Dillian was suspended for testing positive for a banned substance, a mistake he owns up to this day. Whether Whyte knowingly took a PED or not, will never truly know.

After some shaky moments in the early goings, Whyte ended up hurting Joshua, and the two combatants engaged in an action fight that saw A.J. winning via 7th-round technical-stoppage.

In the process of building back his career, Whyte fought Derrick Chisora, which turned out to be a full-on war and one of the best non-title heavyweight fights in a while. The Jamaican native narrowly escaped defeat with a split-decision victory.

Since then, Whyte has been mediocre in the ring and forced to play the waiting game outside of the ring. Boxing politics can take a toll, but all that stuff is behind Whyte, now the only thing that matters is the outcome on Saturday.

Lucas Browne’s rocky-road to this main event is filled with failed drug tests and long layoffs, compiling a pro record of 25-0, 22 KO’s. Similar to Whyte, Browne dabbled in MMA and kickboxing to a lesser extent.

It’s hard not to assume based off style matchup and location, that a knockout is the best (and probably only) chance for Lucas Browne to get his hand raised. The house fighter in Dillian Whyte is signed to Eddie Hearn’s Matchroom Sports. Hearn fancies Whyte’s next opponent to be WBC champion Deontay Wilder.

Ricky Hatton, Browne’s promoter, said it best when he spoke to reporters about landing a one-punch knockout blow. Hatton went on to talk about the importance of how one goes about delivering the KO punch instead of relying on loading up. Words of wisdom as it relates to Browne’s game plan, as we see lots of fighters especially young or inexperienced, making that mistake.

Lucas Browne’s best bet is to remain relatively active with the basics. Throwing a jab as a range-finder then mixing in a hard jab and other punches, to land or simply blind Whyte in order to deliver a bomb behind it.

Being 100-percent honest as a fan watching at home on the couch or in attendance, this main event could be ugly. This hack of a scribe’s mind state is hoping for a dog fight, but not with high hopes realistically speaking.

We could get an action-packed, two-way scrap like Whyte/Chisora. If that is the case, look for Lucas Browne to hurt or at least buzz Whyte early, only to fade by the midway point. Stamina is the most important part for Lucas Browne, outside of not getting caught early with something flush.

However it plays out, ugly and boring with too many clinches or an entertaining dust-up, Dillian Whyte will come out on the winning side. Inconsistence is a constant for Whyte and the fact that he has looked subpar in recent bouts lends itself to a solid outing. Whyte will take over by the mid-rounds by landing the cleaner shots as Browne’s lack of conditioning catches up with him.

Unfortunately the fans anticipating a Joshua vs. Wilder fight this summer will be disappointed when Dillian Whyte is an announced as Wilder’s next fight.

My Official Prediction is Dillian Whyte by Unanimous Decision.