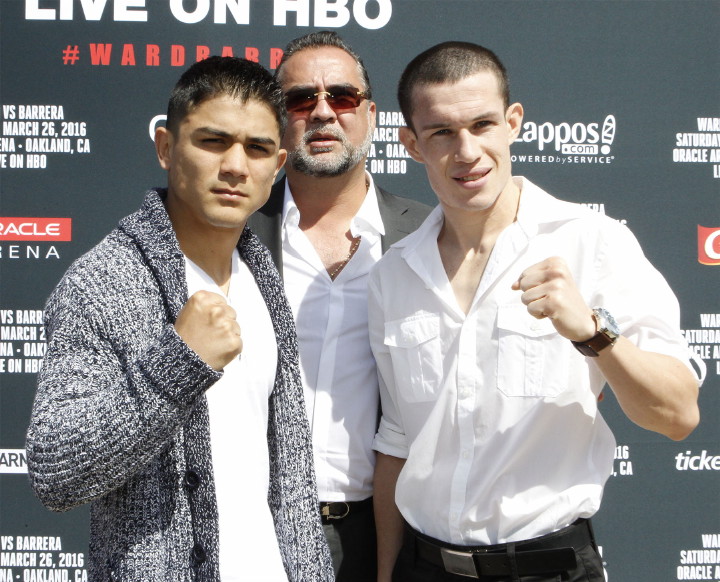 Below is what the fighters, promoters, trainers, managers and other dais guests had to say:

“Come March 26, I know I have a really tough fight ahead of me. I know Jayson Velez is an experienced veteran in the ring. He’s a warrior. He has a six-inch reach advantage over me so it’s going to be a really great fight. I know he’s coming off of a loss, so I know he really wants to bounce back and show everybody that he’s still a world title contender.

“I had a really great training camp. I’ve been training for eight weeks. This is my first time fighting on HBO, so I really want to showcase who I truly am. I’m 110% ready. I’m ready to give fight fans a war if Jayson Velez wants to have a war. I’m ready to showcase to everybody all the abilities I have inside the ring. I’m very excited to be fighting on the Andre Ward and Sullivan Barrera card. They’re two elite athletes and I’m very honored to be the co-main event for this fight. Come March 26, I promise I’m going to give you a great show.”

“I want to thank God first, obviously he makes everything possible. I want to thank my promoters, Miguel Cotto Promotions and Golden Boy Promotions and my whole team. I don’t have too much to say besides that this is a great fight. Joseph comes to fight. I come to fight. We both want to win. We both take challenges. People keep asking me why I took this dangerous fight and the answer is easy…if I want to be the best, I have to fight the best. Joseph is one of the best.

“I lost my last fight, so I need to win. I want to win. I can’t tell you who’s going to win this fight because we both are great fighters and warriors. He’s Mexican, I’m Puerto Rican, and when you have a Puerto Rican and a Mexican in the same ring, you will see a war. You will see speed, power, everything in this fight. He’s a great fighter and I’m so excited. Thank you to everyone and stay tuned this Saturday and thank you to HBO of course.”

“Obviously the main event speaks for itself. You’ve got Andre Ward versus a young undefeated guy like Sullivan Barrera, but the co-main event is going to pit two young, hungry fighters against one another in Jayson Velez and Joseph Diaz. They’re both young. They’re both willing to take on the best fights, the toughest fights and proof of that is how easy it was to make this fight.

“I’m very excited about this fight. You don’t want to miss the 10 rounds for the NABF title.

“Jayson Velez is a young, hungry lion who wants to get back up on the stage and knows how significant a victory over Joseph Diaz is. He understood the opportunity to fight on HBO and on this tremendous card. I want to remind you of the character of Jayson Velez. In a day and age where a fighter that loses wants to take maybe a comeback or tune up, or two or three, before they take a high-risk fight and Jayson Velez is doing it right after. That shows he wants to get back on top and he knows what he has to do to get there…it has to be by stopping a top-level fighter like Joseph Diaz.”

“It’s an honor to be here, a great opportunity and privilege to be given this opportunity to showcase a talented, 2012 Olympian. To Joseph, this is what we talked about, thank you for being patient, you are ready for the opportunity. We know what a special young man and talented man you are, but now the whole world will get to see on the big stage what a talent, what a real gentleman and what a fighter should be…like Joseph Diaz.

“What can I say about Jayson Velez? He’s a gentleman who knows what’s at stake and has experience. Believe me, you don’t want to miss this. Saturday, you must tune in. It’s going to be an action-packed fight.”

Ward vs. Barrera, a 12-round IBF number one position and mandatory position eliminator which is presented by Roc Nation Sports in association with Main Events, takes place Saturday, March 26, 2016 at Oracle Arena in Oakland, California. The event is sponsored by Corona Extra, Ticketmaster, Corporate Travel Management Solutions (ctms), Glad, Lyft, Zappos, BodyArmor, SAN Nutrition, Shoe Palace, The Waterfront Hotel and Visit Oakland. The event will be televised live on HBO World Championship Boxing beginning at 9:45 p.m. ET/PT. Opening the HBO telecast will be Joseph Diaz Jr. vs. Jayson Velez in a 10-round fight for the NABF Featherweight title presented by Golden Boy Promotions in association with Miguel Cotto Promotions.