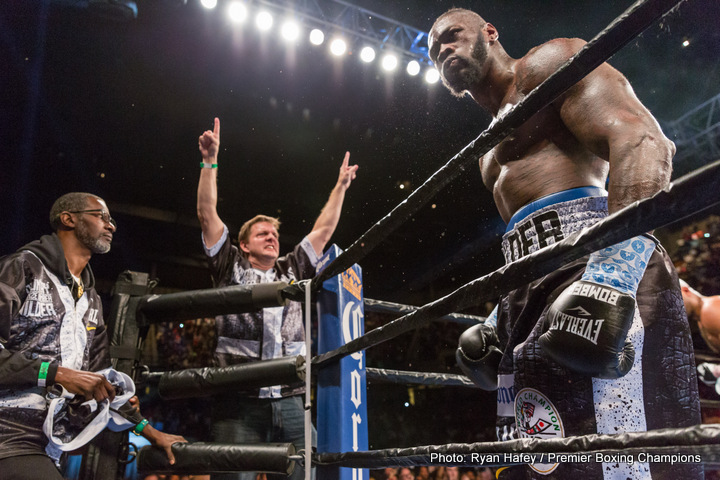 Earlier this week a story ran where former cruiserweight champ and current Sky Sports pundit Johnny Nelson claimed in an interview that he knew of the time Deontay Wilder was KO’d twice when the Alabama warrior sparred Wladimir Klitschko. According to Nelson, this tale – “the worst kept secret going” – is true and Wilder was not only “knocked out cold twice,” but also put down a third time by a Klitschko body shot.

Nelson claims all of this happened over the “various occasions” that Wilder sparred Klitschko. It hasn’t taken long for the reigning and undefeated WBC heavyweight king to respond. And guess what, Wilder refutes everything Nelson said.

“Johnny Nelson, oh, he said that me and Klitschko sparred on various occasions, and in fact that Klitschko knocked me out cold and dropped me with a body shot,” Wilder says in his video for LDBC Sports. “Keep in mind that Klitschko hasn’t thrown a body shot in eleven damn years! All of a sudden it had to be me. Why me? I had to be dropped in sparring. I was only in the Klitschko camp one time and I held my own with everybody. All of a sudden this mysterious untold story of me and Klitschko [appears] and he knocked me out, come on, man. Please, people with bitch tendencies. I’m the wrong man to spread rumours about and lies.”

Wilder, who so far has no next opponent confirmed (it could be a rematch with Bermane Stiverne) goes on to say that regardless of what Nelson says, he very much wants to fight Anthony Joshua – who of course stopped Klitschko in a great fight with Wilder in attendance – next. “Boxing may have originated in the UK, but those belts are going back to the USA, trust me,” Wilder said in signing off.

So, is there any truth to the Klitschko sparring story? Nothing concrete. But the sport is littered with these kind of tales anyway. What happens in the actual bout is all that matters, though. Basically, what happens in sparring in the gym should stay in the gym.