Like many boxing fans, the two-time former WBC super middleweight champion Benavidez entertained the 24-year-old Rolly during his recent press conference with Gervonta.

Rolly was like a stand-up comedian, someone with the natural acting ability with the way he took over the press conference with his trash-talking. Pretty much everyone was in awe of his talent.

Tank couldn’t match the charisma and the comedic skills that Rolly displayed on the stage. It was like a one-man show, and everyone there looked in admiration of his talent. When Rolly was talking, the press conference came alive.

The only time the press conference was interesting was when Rolly was talking. Other than that, it was boring with no one saying anything and putting people to sleep. Gervonta, Floyd Mayweather Jr., and Leonard Ellerbe don’t possess the charisma or the comedic skills Rolly has.

They should have just stood back and let Rolly talk the whole time because it would have been a lot more interesting to watch.

With that said, him beating Gervonta is a tall order on December 5th. Benavidez doesn’t see it happening, and neither does this writer. David is predicting a knockout win for Tank in this fight, and he thinks there’s very little competition for him.

“I feel like Rolly’s trash-talking took over the show. It was hilarious, honestly. I mean, it’s the smart thing to do [not fighting during the press conferences] because they got a lot of money on the line.

“I feel like that’s the best way to happen. I think Gervonta Davis is going to knock him out,”  said Benavidez.

Gervonta has to be careful against Rolly Romero because he can punch, and we’ve seen how Tank tends to walk into shots.

Things looked dire for Tank in his last fight against Mario Barrios on June 26th until he hurt him in the eighth round. Rolly hits harder than Barrios, and he’s not the type of fighter you want to get hit by too often.

If Tank plods into some of Rolly’s best shots on December 5th, he could get dropped. Rolly has got the kind of power to finish Tank if he gets him hurt.

Haney the only competition for Tank at 135

“I don’t look up to him, but I admire his work and everything he’s done. I don’t feel like Rolly is the one to beat him right now.

“I think if he [Tank Davis] would have good competition against anybody, it would be Shakur Stevenson, Devin Haney, and Josh Taylor, but I feel he smokes everybody else,” said Benavidez about Gervonta being too good for many of the fighters at 135 and 140.

Interestingly, Benavidez didn’t mention Teofimo Lopez and Vasily Lomachenko as fighters at lightweight that would give Tank Davis competition.

Indeed, Lomachenko and Teofimo have enough ability to give Tank Davis problems.

If little past his best Leo Santa Cruz were able to give Tank something to think about, Lomachenko and Teoifmo would also give him headaches.

Devin Haney didn’t look so good in his last fight against Jorge Linares, and he might not be able to hang with Gervonta for long without getting his bell rung. 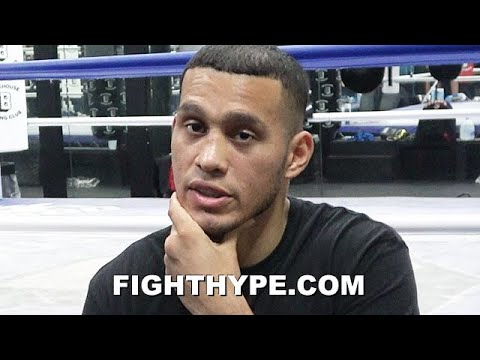