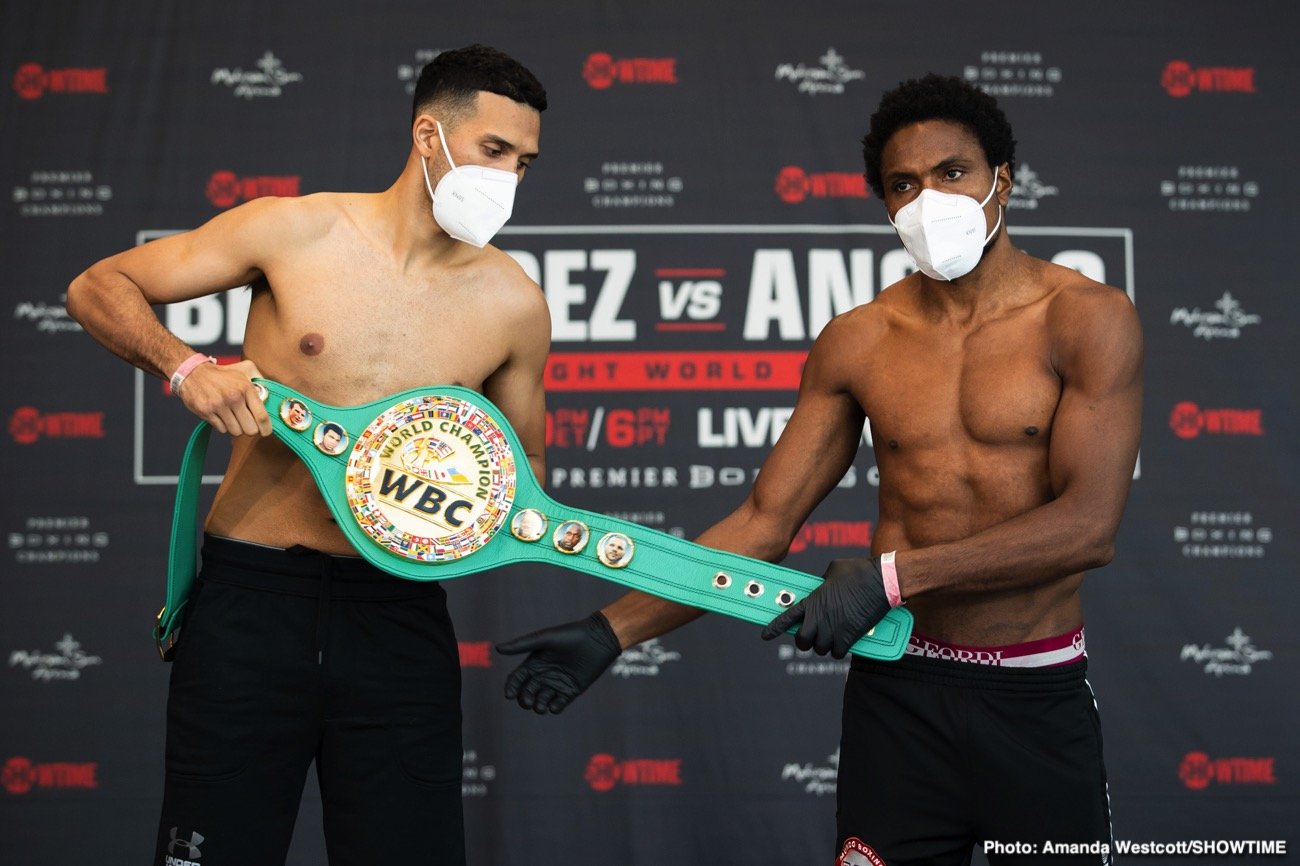 WBC Super Middleweight World Champion David Benavidez missed weight today at the official weigh-in for Saturday’s SHOWTIME CHAMPIONSHIP BOXING tripleheader, losing his world title belt on the scale. Benavidez will face world title challenger Alexis Angulo in the main event as planned. Angulo can earn the WBC 168-pound title with a win. All other fighters on the card made weight. Final weights, photos and officials are below.

David Benavidez on losing his world title on the scale:

“I’m very disappointed. This is obviously my first time missing weight. Just very disappointed to lose the title on the scale, but I’m still going to win the fight tomorrow. I put the blame on myself. It’s just the last three pounds wouldn’t come off. Maybe not having the proper things I needed like no sauna. I was only able to go to the gym an hour a day since I got here. It’s just a couple of different things, but I still have a job to do tomorrow. Maybe later the opportunity will present itself, but I still have a fight to win.

“I didn’t think this all the way through. Coming in I thought I would have access to more, but I didn’t. Maybe this is a message to all the other fighters who have a little bit of trouble with their weight. It’s going to be hard to make the weight if you already have trouble. If you need a couple extra things like the gym or the sauna, you better come into the bubble already on weight. Because it’s very hard.” 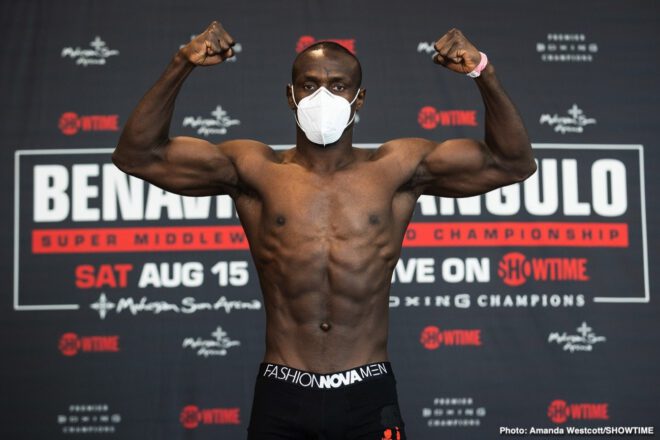 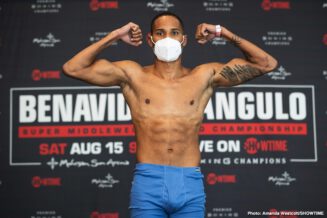 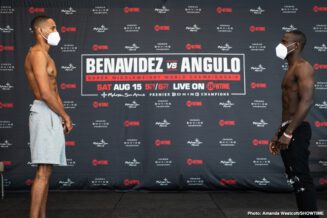 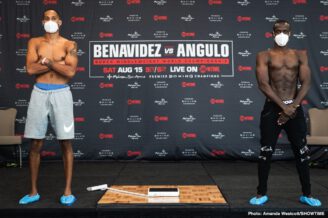 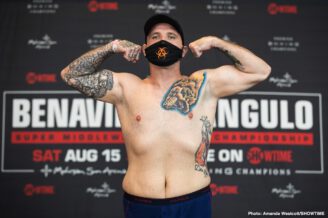 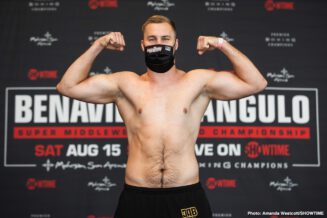 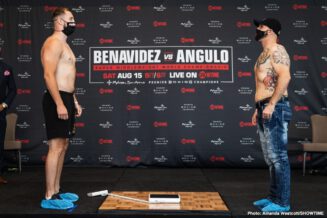 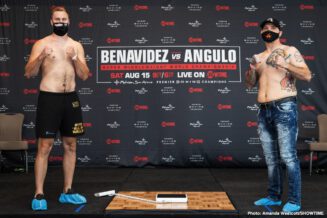 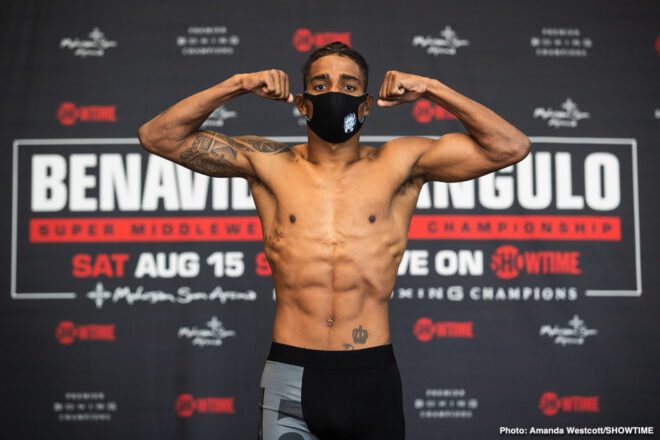 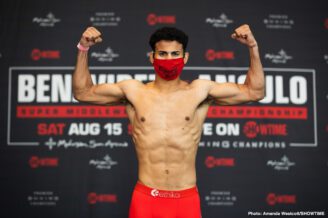 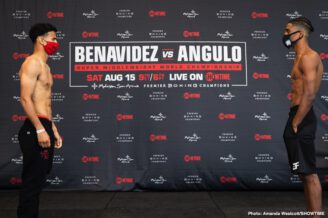 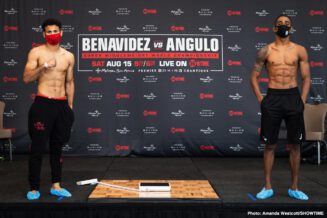 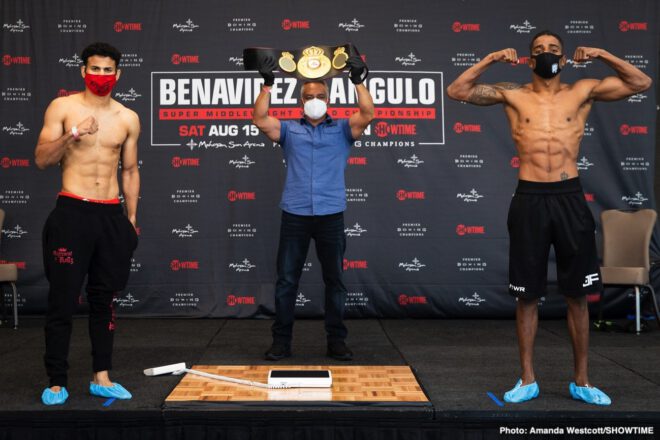 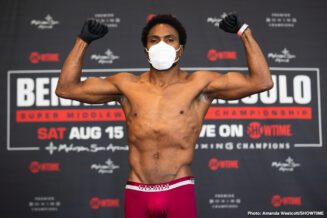 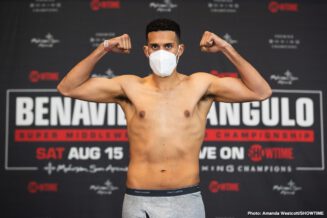 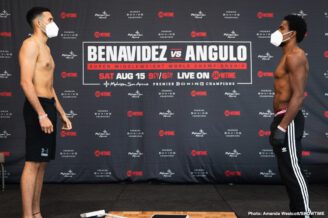 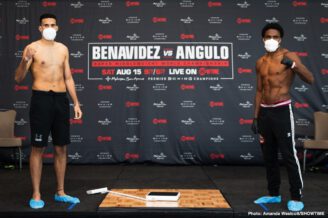 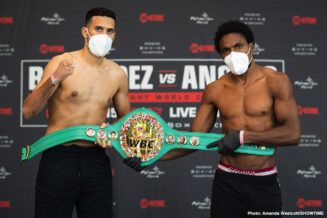 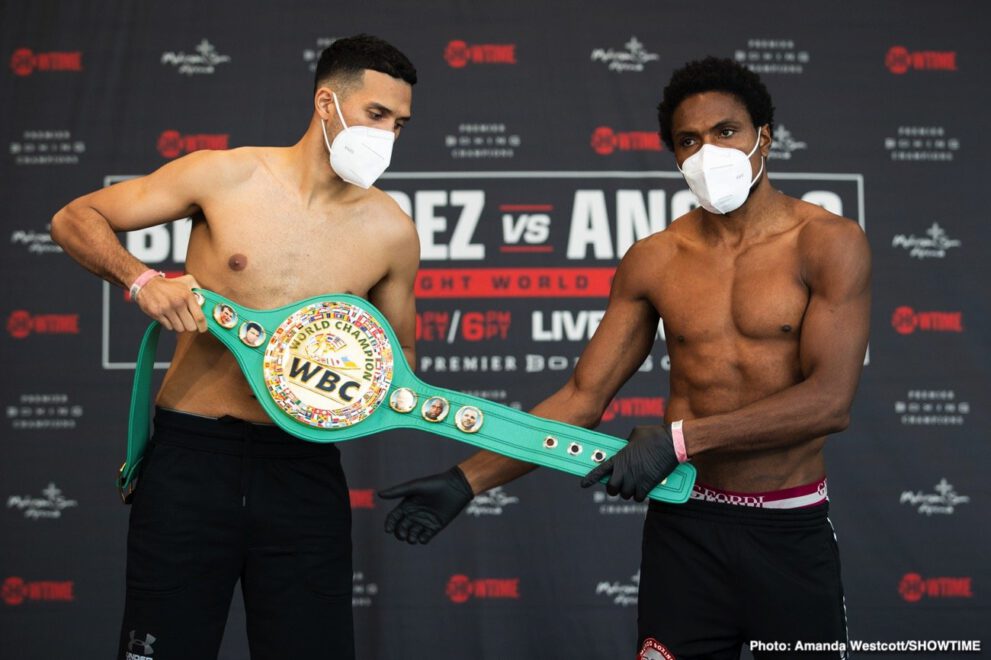 The SHOWTIME CHAMPIONSHIP BOXING telecast begins at 9 p.m. ET/6 p.m. PT and also features rising lightweight Rolando “Rolly” Romero taking on fellow unbeaten Jackson Maríñez in a 12-round battle for the interim WBA Lightweight Title, while heavyweight contenders Otto Wallin and Travis Kauffman square off in a 10-round showdown. The event is promoted by TGB Promotions and Mayweather Promotions. The main event is promoted in association with Sampson Boxing and the Wallin-Kauffman bout is promoted in association with Salita Promotions and Kings Promotions.

“Benavidez can expect a strong challenge from the exciting Roamer Alexis Angulo, which should create an action-packed main event live on SHOWTIME. SHOWTIME Sports continues its tradition of featuring the brightest young stars in boxing,” said Stephen Espinoza, President, Sports & Events Programming, Showtime Networks Inc. “At just 23 years old, David Benavidez is one of boxing’s most exciting young champions, and he’s facing a dangerous opponent in Roamer Alexis Angulo, who is hungry for another upset victory.”

The 23-year-old Benavidez (22-0, 19 KOs) defends his belt after defeating two-time super-middleweight champion Anthony Dirrell in September, stopping him in nine rounds. Benavidez is trained by his father José Sr., alongside his brother and former title challenger, José Jr. In 2017, he became the youngest super middleweight champion in boxing history by defeating Ronald Gavril on SHOWTIME at just 20 years old.

Benavidez went from a 15-year-old prodigy sparring with Gennady Golovkin and Peter Quillin, to world title contender with a 10-fight knockout streak from 2015 through 2017, including a highlight-reel knockout of Rogelio Medina with a seven-punch combination that earned him his first championship.

“I expect Angulo to come in ready. I know he just pulled an upset in his last fight and he’s not taking any shortcuts, but neither am I. Angulo has never been stopped, so I want to be the first person to stop him. I feel like I’m more motivated with a hungry fighter like him in front of me, and you will see it in my performance.”

Born in El Bordo, Colombia and now fighting out of Miami, Fla., Angulo (26-1, 22 KOs) enters his second world title opportunity on a three-fight winning streak, including two triumphs over previously unbeaten fighters. Angulo stopped Reinaldo Gonzalez in 2018 in his first fight since losing a decision to then-super middleweight champion Gilberto Ramirez earlier that year. He scored a decision victory this January over Anthony Sims Jr. to put himself in position to again challenge the best in the division.

“I’m very motivated by this great opportunity to fight for the world title again,” said Angulo. “Benavidez is a talented world champion who is clearly one of the best super middleweights in the world. This is going to be a great fight for the fans because of the style I bring to the ring. My Mexican style of fighting will be too much for Benavidez and I will have my hand raised on Saturday”