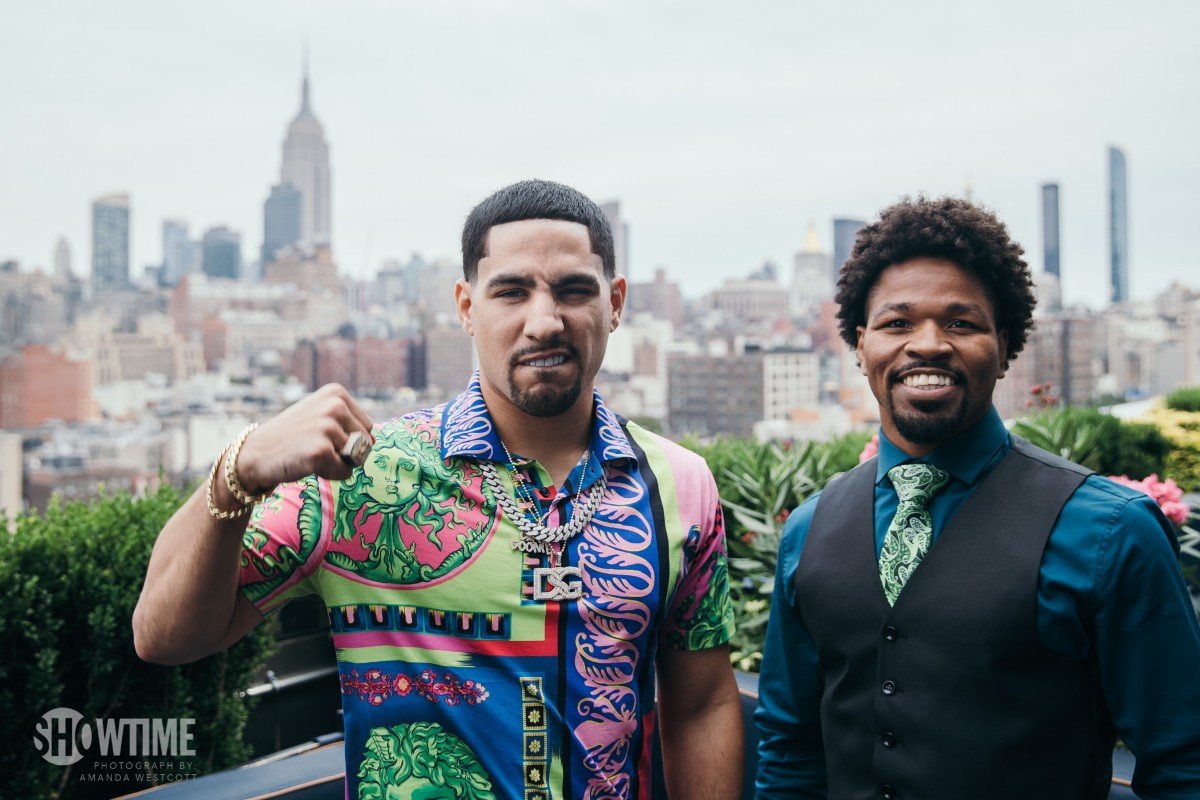 Former welterweight world champion “Showtime” Shawn Porter hosted a media workout at the Porter Hy-Performance Center in Las Vegas Wednesday as he prepares to take on Danny “Swift” Garcia for the vacant WBC Welterweight World Championship on Saturday, September 8 live on SHOWTIME from Barclays Center, the home of BROOKLYN BOXING™.

Porter was joined by his father and trainer, Ken Porter, as the two discussed the highly-anticipated welterweight showdown presented by Premier Boxing Champions. Here is what the Porters had to say Wednesday:

“I love being in training camp and grinding every day. We’re just 100 percent focused on what we have to do. I’m seasoned enough where I know how to excel through these stages of camp. I feel great.

“We always work on the jab to start our training session. Everyone knows that everything I do comes off of my jab. It’s all about the fundamentals. My dad is smart and knows my athletic potential is there. He’s focused on all the technical and strategic parts of the game.

“Whether we look to box or not will be a game-time decision. We’ll have to read the fight. I think we’re going to start trying to mix it up and then take it from there. It’s up to me to see the adjustments and make them. Whatever it takes to win this fight, I am prepared to do it.

“Danny’s counter-punching I think plays into my hands. I’m a combination puncher. There’s more than one coming. If there is only one coming, you don’t know where it’s coming from. I think it’s going to take care of Danny’s strength, but I don’t take it lightly. I know that he’s a strong fighter and that’s what I expect in the ring.

“I don’t believe that he’s going to stand toe-to-toe with me, but I do believe that’s where he thinks he can win the fight. The point is to hit and not get hit, so we’ll try to keep it as clean as possible. It gets rough in there sometimes, but if you can’t handle the heat, get out of the kitchen.

“Once upon a time I probably would have that thought that I could just beat Danny with activity. But I know that I have to be sharp, precise and land most of my punches. I want to throw 60 a round and land 40 percent.

“I’m going go out there and be aggressive, be sharp, be quick and let the rest take care of itself. This is a humungous fight that I’ve been looking forward to for a long time.”

READ:  Carl Froch Calls Out Joe Calzaghe: “Have You Seen The Size Of His Head?”
https://www.youtube.com/watch?v=EpRP6GOFtpY

“Any fight that Shawn is in, you’re going to have action. If Shawn went in there and laid back, I doubt that Danny would go after him. I just don’t think Danny is going to go forward like that.

“We have to continue to do what we’ve done to get this far. But we’re not going to go after him the way he expects us to.

“Danny is trying to pump himself up like he’s some kind of one-punch knockout artist. But I’m a one-punch artist if it’s against someone who can’t box anymore or who’s coming way up in weight. If you hit Shawn Porter with one of those punches, he’s going to hit right back, and with Shawn, it’s going to be more than one.

“My focus is on making sure that Shawn is prepared to do the things I need him to do. I have to get him where I need before I focus too much on what Danny is going to bring. We’re making sure Shawn is 100 percent first.”

“When he fights in the ring I see the energy that I had.” – Kenny Porter.

Angel Garcia and Kenny Porter, who both also serve as their sons’ trainers, are asked by Gray how they react when they watch their sons take punishment in the ring.

“As a dad, I have to separate the boxing,” Angel Garcia said. “So when Danny’s in there I’ve got to look at him as a coach. I can’t look at it as a dad.”

Said Kenny Porter: “As a former boxer, I felt what it’s like to be in that ring… So I feel differently when he’s in the ring. I have a more competitive spirit towards winning than maybe someone who’s kid is in there and they’re looking at whether the kid is getting injured. I’m looking at it like, let’s win.”

Gray gets Porter and Garcia to open up about challenges, regrets and the aspirations they’ve carried for their progeny both in the ring and outside of it. “I do [have regrets],” Angel Garcia said. “I said my faults. I’m not perfect.”

At the end of the interview, Kenny unveils a Garcia “DSG” T-shirt that reads: “Showtime Destroys Garcia” and both fathers shared a big laugh.

Carl Froch Calls Out Joe Calzaghe: “Have You Seen The Size Of His Head?”92 Total Shares

Carl Froch Calls Out Joe Calzaghe: “Have You Seen The Size Of His Head?”92 Total Shares