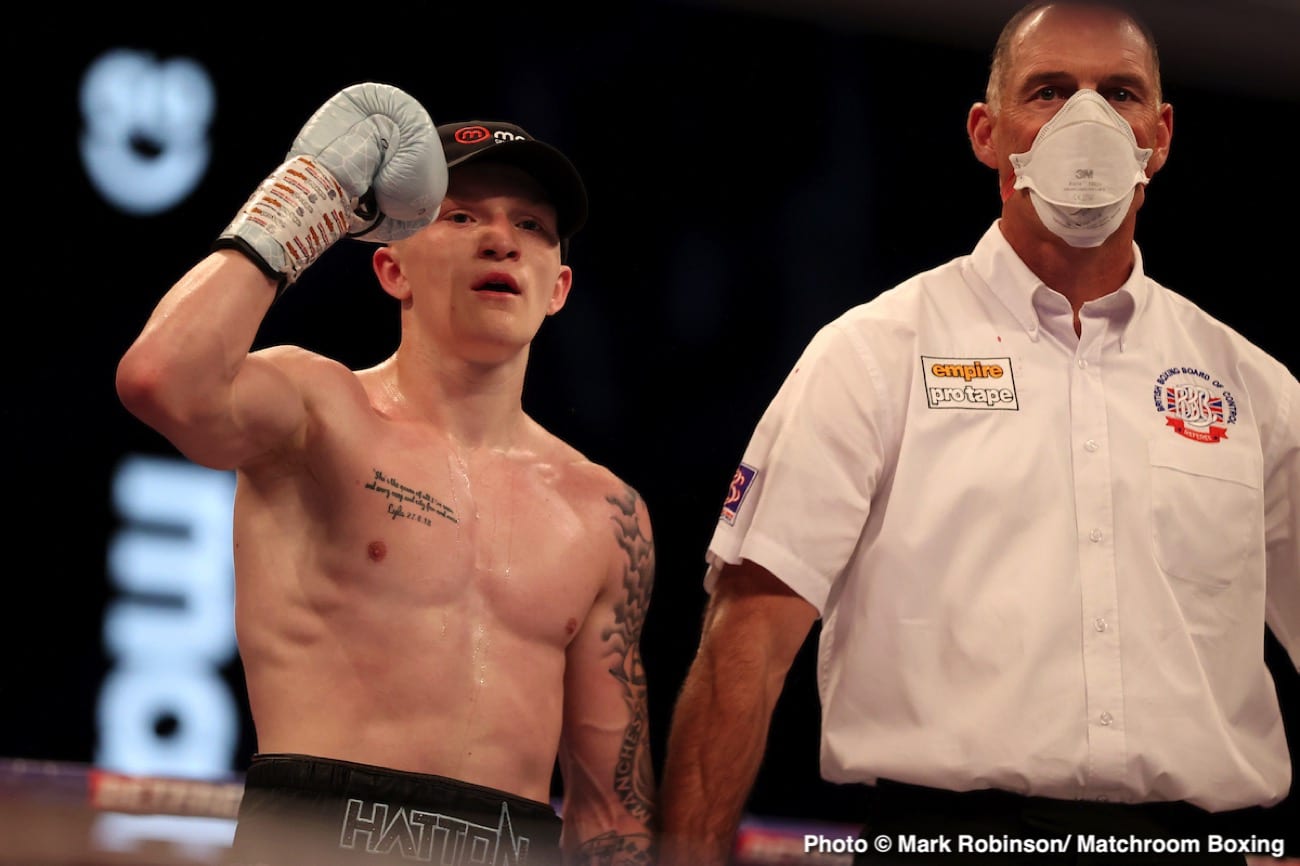 Campbell ‘Hurricane’ Hatton turned in a much improved performance from his last outing and moved his career record to 5-0 (1KO) with a second round knockout of Hungarian fighter Atilla Csereklye in Spain.

IN THE RED CORNER – CAMPBELL HATTON

When talking to DAZN before the fight, Hatton acknowledged disappointment in his poor performance last time out while scraping a narrow points win over Sonni Martinez. Many observers believed Hatton could have suffered his first loss against Martinez, but the Hurricane eked out a narrow win by a score of 58-57 on referee Marcus McDonnell’s scorecard.

Hatton cited the pressure of fighting in front of a huge crowd on a big stage for his stilted performance against Martinez, with the contest taking place at Tottenham Hotspur stadium in front of 60,000 fans on the undercard of Anthony Joshua v Oleksandr Usyk.

While Jack Flatley’s WBU European junior middleweight title challenge against Kerman Lejarraga was no small matter, it did not carry the global footprint of Joshua and Usyk’s world heavyweight title clash, and allowed Hatton to perform in a less overwhelming scenario.

IN THE BLUE CORNER – ATILLA CSEREKLYE

Csereklye was by far Hatton’s most experienced opponent to date, even if he did carry a journeyman record of 10-24 (8KO) into this fight. Hatton’s previous four opponents had combined for only six wins combined before facing the Hurricane, and Csereklye had gone the distance before losing on points in his last three contests.

Hatton made his entrance to the now familiar ‘Blue Moon’ theme song also used by his father Ricky Hatton. A visibly fired up Hatton beat his glove against the crest of Manchester City on his chest as he made his way purposefully to the ring.

The Hurricane started the fight confidently behind a crisp left handed jab and backed Csereklye onto the ropes, only for the Hungarian to burrow his head into the chest of Hatton and break up momentum. Referee Francisco Ruiz separated the pair and Hatton continued on the front foot, landing a strong shot to the body before Csereklye grabbed onto a clinch.

Hatton backed Csereklye into a corner and landed another shot to the body before the Hungarian took a knee and received an eight count from referee Ruiz before resuming. There was little respite for Csereklye as Hatton came forward relentlessly and threw a left jab before unleashing a whipping left hook to the liver that saw Csereklye go down again, this time receiving a nine count before fighting on.

A game Csereklye threw two punches in response to suffering his second knockdown and attempted to rough up Hatton by going into a clinch and throwing a right handed punch to the head.

Csereklye spent the remainder of the round continually grabbing onto Hatton, with the bell sounding as his head was buried in Hatton’s chest to force the Mancunian fighter backwards.

Both fighters continued their first round patterns in the opening moments of round two, Hatton jabbing sharply and Csereklye looking to hold on and survive. Hatton was zoning in on the body, unleashing powerful left handed punches and began throwing more blows in the clinch before referee Ruiz could pull the fighters apart.

Hatton backed Csereklye onto the ropes, landing a left and right hand to the body before showing his strength and throwing his opponent around and onto the ropes to stifle yet another attempted clinch. A dominant Hatton landed an avalanche of body blows with his opponent on the ropes before Csereklye was granted a brief respite when referee Ruiz ruled one punch to be a low blow.

The Hurricane was undeterred by the brief halt in proceedings, coming forward and landing a strong right uppercut before felling his opponent for the third time with a left handed uppercut in the corner to end the fight.

“About time innit? I’m buzzing,” a clearly relieved Hatton told DAZN ringside after the fight. “I think you could see from the start I wasn’t trying to stop him, I was being a bit more patient trying to make him miss a bit more and use my jab and then it happened by accident.”

The pundits were also very positive in their reviews of the performance, with former world champion Darren Barker calling it “the best two rounds of Campbell Hatton’s career so far.” There will be few who disagree with Barker, as Hatton span out with good footwork when Csereklye got close and did a better job of finding his range for forceful and precise blows.

It is a case of activity above all for Hatton who has produced five wins from five fights during his first year as a professional. “I’ve got the fitness, got the work rate, I’m strong and I’ve shown tonight that I’m improving on the technical side,” Hatton told the Matchroom Boxing Youtube channel post-fight. The only thing I think I’m lacking is experience and there’s only one way to get that, hopefully next year is as busy as this one.”

This was an unimpressive performance from Csereklye but one fight does not a career make, the Hungarian fighter has a track record of hanging tough and will have no difficulty getting work having taken 11 different opponents the distance.