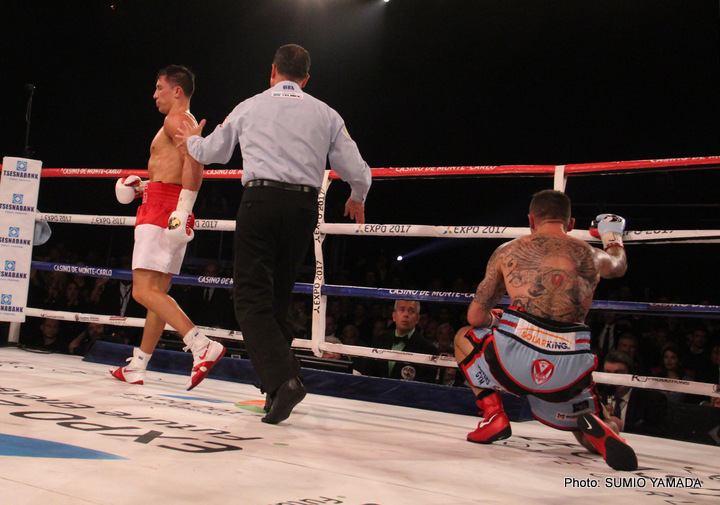 In an interview with ESNEWS, top fighter Brandon Rios and his trainer Robert Garcia discussed the man at 160 lbs Gennady Golovkin. The first topic discussed was a matchup between Peter Quillin and Golovkin which prompted both Garcia and Rios to immediately go with Golovkin. Garcia then said that he had watched a lot of GGG’s recent performances and was impressed with his coordination and power, but saw that he was hittable and wondered how he would do against some of the better middleweights in the past. Rios also mentioned that he rated Martin Murray highly for taking his shots and putting in an impressive performance against Golovkin.

Robert Garcia then brought up names like Kelly Pavlik, Roy Jones Jr, James Toney and Bernard Hopkins and said that those type of opponents are not around right now, and questioned whether Golovkin would be having his way with middleweights as he is today if that type of opposition was still active. It is a good point as certainly you would pick those fighters over the ones GGG has been beating recently, but never the less Golovkin and his team have been making such easy work of the current crop of middleweights that its hard to pick a winner in any of those hypothetical matchups. It’s the same story with guys like Mike Tyson and Floyd Mayweather, people love to try and gauge how well they would have done against fighters form other eras and at the end of the day, the amount of different possibilities makes the exercise pointless. Ultimately it is impossible to say.

Robert Garcia then said he would not be surprised if Julio Cesar Chavez Jr made history by knocking out Golovkin should that fight ever get made. Chavez recently came out and said that he would bet one million dollars of his purse that he could do it and its not like he doesn’t have power. This is what we saw with Tyson in the 80’s. He won so much and in such a fashion that the media hyped him up to be something that it turned out he wasn’t. That aura of fear created around a fighter can make them seem invinsible, but when a fighter goes in there and knocks them out we are all left wondering how we were so intrigued by them in the first place. After Matthysse smashed Peterson inside three rounds everyone feared him, but when Garcia outboxed him and put him down that fear factor was eliminated.

At the end of the interview the pair were asked how Golovkin would fare against fellow 160lb champ Miguel Cotto. Rios said that he would stop him and Garcia agreed saying that was a possible scenario. Rios went on to say that when he met Miguel Cotto, Rios was the larger of the two. This isn’t good news for Cotto if he would be going up a bigger and physically stronger guy like Golovkin, because to stop his relentless offense you need some kind of power of your own to keep him off of you. Whilst Cotto certainly had power, that hasn’t followed him all the way up to 160.