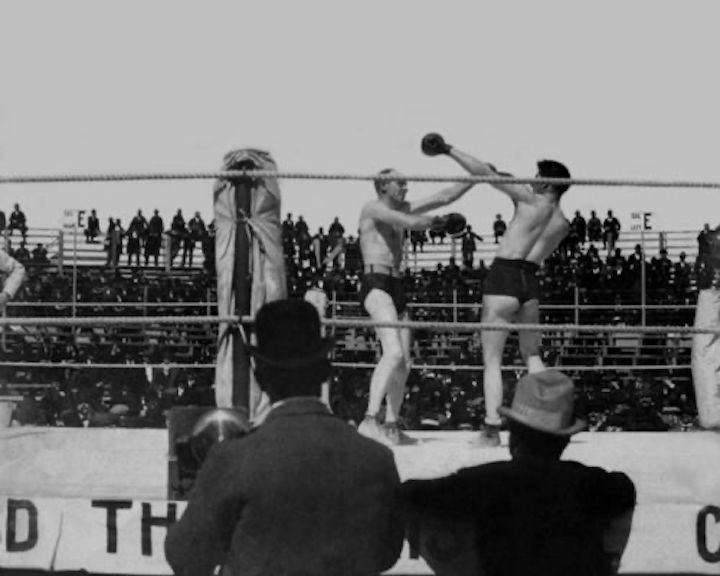 Boxing history was made on this day way back in 1897, as Bob Fitzsimmons unleashed his famed “solar plexus punch” to take out Jim Corbett and take the world heavyweight title. The fight, an epic battle, also holds the distinction as being the first prizefight ever captured on film; while the winner holds the distinction as being the sport’s first-ever three-weight world champion. And if that’s not enough for historians and fight buffs, a certain Wyart Earp was in attendance, in defending champ Corbett’s corner – armed with a revolver (so legend says).

The fight took place in Nevada and the state legalized the sport of boxing so as to allow Fitzsimmons-Corbett to go ahead.

Corbett, making his second title defence, was in almost total control of the fight for most of the 13 rounds before the sudden ending. Knocking the far smaller Fitzsimmons down with a body assault in the sixth round and having the Cornish man in dire trouble, San Francisco’s Corbett watched with amazement as the challenger managed to clamber up and see out the round. “Ruby Bob” took more sickening punishment over the course of rounds seven through 13. This was a fight that would certainly have been stopped if it took place today.

But Fitzsimmons, showing almost superhuman strength and desire, managed to land a powerpacked blow to the body, to the solar plexus, in round-14. Corbett went down hard and heavy, every ounce of breath sucked out of his body. Fitzsimmons, who had previously ruled as world middleweight champ, and would go on to win the world light-heavyweight crown, was now the world heavyweight king.

Today, well over a hundred years later, a fight fan can watch a few minutes of grainy footage and can watch Fitzsimmons pull off his remarkable victory. It’s an incredible story, of an incredible fight, and how special a fighting man was Bob Fitzsimmons! Retiring with a record of 61-8-4(57) – this according to invaluable site BoxRec – Fitzsimmons had to wait many decades before another man from his country of birth managed to capture world heavyweight honors.