Top Rank promoter Bob Arum predicts Saturday night’s headliner fight between Miguel Berchelt and Jeremia Nakathila will be a “bombs away” type of fight that will end in a knockout at the Resorts World Las Vegas, Las Vegas. The fight can be seen LIVE on ESPN and ESPN+. 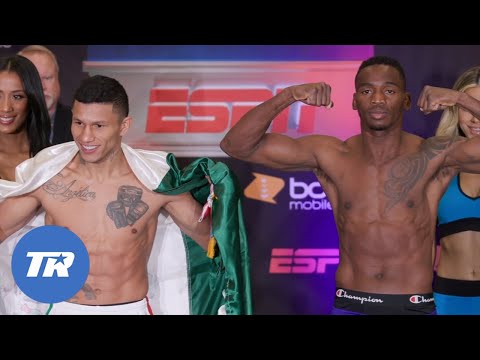 On Friday, Berchelt weighed in at 135 lbs at the weigh-in for his first fight in the lightweight division.

Berchelt has been campaigning at 130 for most of his career, and it was only after his loss a year ago at the hands of Oscar Valdez that he decided to move up in weight to 135.

Nakathila weighed in at 133.6 lbs, but he’s still campaigning at super featherweight.

Berchelt, 30, has had a year off to recover from the knockout, but we won’t know if he’s 100% back until he gets in the ring tonight and his chin is tested by the hard-hitting Nakathila (22-2, 18 KOs), who might be a bigger puncher than Valdez with either hand.

That’s potentially not good news for Berchelt if his KO loss to Valdez made him more susceptible to getting knocked out. If that’s the case, Berchelt will need to try and get to Nakathila’s chin before he can land one of his murderous bombs tonight.

Nakathila was totally schooled by Shakur Stevenson in a one-sided 12 round unanimous decision loss in June of 2021 when the two battled for the interim WBO super featherweight title.

“I would certainly think so,” said Bob Arum to Fighthype when asked if Jeremia Nakathila will have an easier time hitting Miguel Berchelt on Saturday than he did Shakur Stevenson last June.

“This fight isn’t going to a decision. They don’t fight like they’re going to go to a decision. Again, that depends on the athlete,” said Arum when asked if we can expect Berchelt to be the same fighter after his brutal tenth-round knockout loss to Oscar Valdez in February 2021.

“Sometimes a guy is finished after losing like that. Sometimes, he gets better. It depends. You can’t generalize like that until you actually see them in action after their next fight.

“None of them will admit that they’re gunshy, but they are,” said Arum about fighters occasionally losing their nerve to pull the trigger on their shots after suffering a bad knockout or decision loss.

“Sometimes, they take a beating and they’re never the same. Other times, they’re not affected physically, and mentally, they realize this mistake or that mistake, and they become better fighters. You can’t generalize with boxers, you just can’t,” said Arum.

If Berchelt loses to Nakathila, Arum likely won’t be too happy because he’s the guy that is the bigger name and has accomplished far more in his career.