Canelo Alvarez will need to find a way to deal with WBA light heavyweight champion Dmitry Bivol’s massive size advantage over him on Saturday night, or else he’s going to suffer potentially his worst career defeat.

Matchroom Boxing promoter Eddie Hearn is aware of how much Bivol (19-0, 11 KOs) will rehydrate overnight, and he says he’ll be in the low to mid-190s by the time he enters the ring to make a voluntary defense against Canelo (57-1-2, 39 KOs) at the T-Mobile Arena in Las Vegas.

Surprisingly, many of Canelo’s loyal boxing fans feel that Bivol is no different than the fighters he’s recently crushed in Caleb Plant, Billy Joe Saunders, and Avni Yildirim. It could be a real eye-opener for them on Saturday night.

Even if Hearn’s prediction about Bivol’s weight is off by five to ten pounds, it’s still going to be a difficult fight for Canelo to deal with his mobility, power, and size.

The experience that Canelo had from his fight with WBO light heavyweight champion Sergey Kovalev is meaningless because that fighter was no longer fighting at a high level due to age & ring wear.

“Dmitry Bivol will rehydrate to 190 to 195 pounds tomorrow,” said Eddie Hearn to Fight Hub TV about his belief that WBA 175-lb champion Dmitry Bivol will pack on 15 to 20 pounds overnight after weighing in at 174.6 lbs at Friday8’s weigh-in for his title defense against Canelo Alvarez.

“Don’t forget that Canelo said no to a dehydration clause, and he also said no to a catchweight because he felt that wouldn’t have been proper rules for a light heavyweight world championship.

“Really, Canelo will come into the ring tomorrow at 180 lbs maximum, and Bivol will be at least 190 lbs tomorrow.

Again, this is very difficult to do. For Canelo Alvarez, you walk him down, cut the ring off, you beat him up to the body, wear him down and stop him late.

“I think that’s what he has to do in this fight. I wouldn’t be surprised if Canelo has to come from behind as he did against Sergey Kovalev [in 2019] to win the fight, and this is a much tougher fight than Sergey Kovalev. Wait until you see tomorrow night. The atmosphere in the T-Mobile will be amazing,” said Hearn. 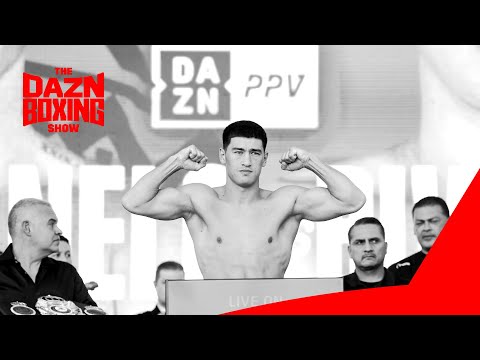