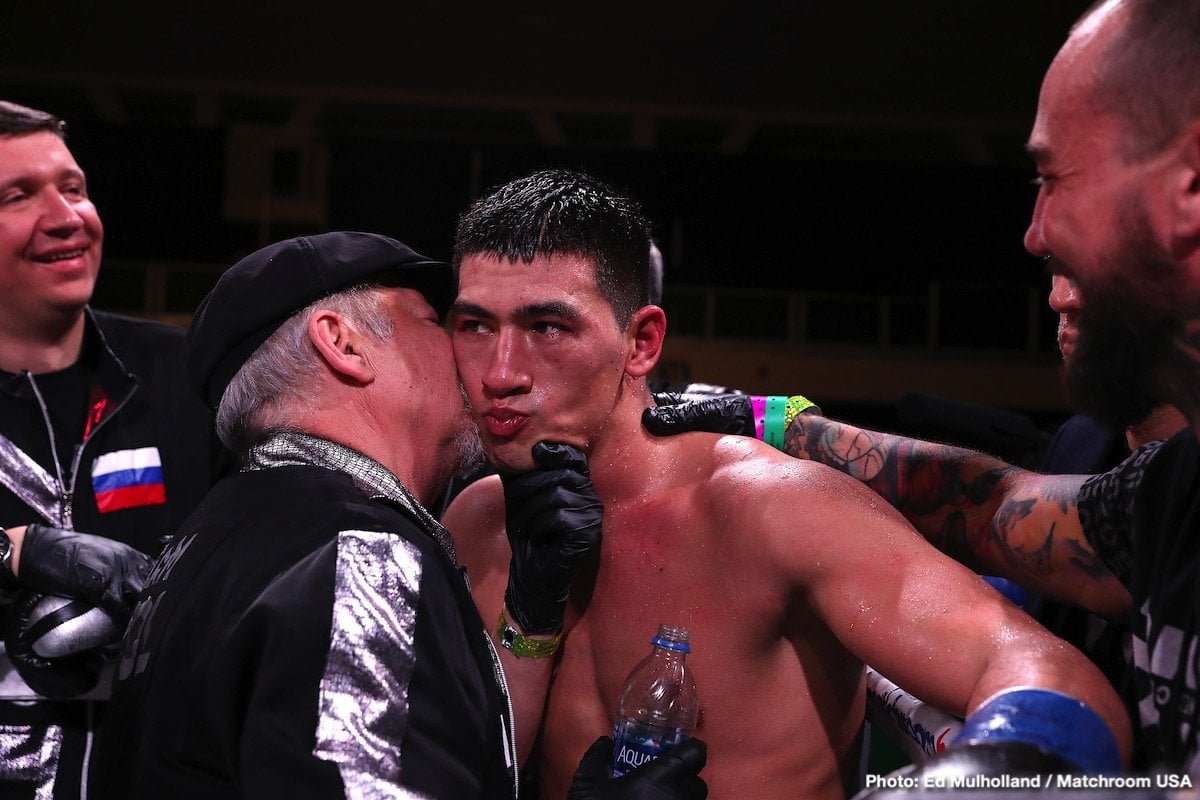 Undefeated Dmitry Bivol successfully defended his WBA light heavyweight world title for the fifth time with a dominating twelfth round unanimous decision over Joe “The Common Man” Smith Jr., in which he won almost every single round on all three judges’ scorecards (118-110, 119-109, and 119-109).

This fight card was promoted by Eddie Hearn of Matchroom Boxing and was televised by DAZN from Turning Stone Resort Casino in Verona, New York.

Bivol controlled this one-sided fight with his vastly superior and more technical boxing skills. He displayed an excellent jab and counter punching and landed the more effective combinations that kept Smith off balance and prevented him from getting into any kind of offensive rhythm. Every round, Smith loaded up on his punches as he desperately tried to land the knockout punch that never happened.

Bivol outworked and out-landed Smith for the first three rounds. Smith had one of his better rounds of the fight in fourth when he connected on a hard right hook that momentarily stunned Bivol. Bivol landed several hard shots in the fifth round and connected on a powerful right uppercut that stunned Smith in the sixth.

He landed a short left hook that staggered Smith in the seventh round and then in the eighth, he connected on back-to-back left hooks that appeared to really hurt Smith. Bivol continued to punish Smith in the ninth, but right before the end of the tenth, Smith landed his best punch of the fight with a powerful overhand right to Bivol’s temple that caused him to stagger back to his corner.

Smith came out in the eleventh with a renewed sense of urgency and aggression as he desperately tried to knockout Bivol. He controlled the round as Bivol was content to take it off to recover from the previous round. Both fighters traded big shots in the twelfth, but Bivol closed the fight with numerous, unanswered hard shots on Smith who somehow did not go down.

Bivol improved to 16-0, 11 KOs. He was extended the full twelve rounds for the third consecutive time.
His promoter, Hearn stated after the fight that he will make his mandatory defense against undefeated Marcus Browne (23-0, 16 KOs) in August. Browne recently defeated light heavyweight world title challenger, Badou Jack in January.

Smith demonstrated a great deal of heart by not going down despite taking a tremendous amount of punishment throughout this fight. He dropped to 24-3, 20 KOs and lost for the second time in his last three fights. Smith was taken to the hospital as a precautionary measure after the fight but appeared to be fine.

Hooker dominated this fight. He was the faster and more powerful puncher and outworked and out-landed LesPierre, who did not throw a lot of punches in the first half of the bout. Hooker knocked down LesPierre midway through the fifth round, however, referee, Benjy Esteves Jr. ruled it was a slip.

LesPierre fought much better in the second half of the bout as he finally let his hands go. He fought a competitive sixth and seventh round and might have won the eighth. Hooker scored a knockdown in the ninth via a powerful left hook to the body. LesPierre barely beat the ten-count and somehow survived the round. Hooker punished LesPierre for the next three rounds and staggered him on several occasions, yet LesPierre hung in there and made it to the final bell.

Hooker upped his record to 26-0-3, 17 KOs. He successfully defended his WBO belt for the second time since he defeated Terry Flanagan last year via a split decision. LesPierre suffered his professional loss as he fell to 21-1-1, 9 KOs.

After the bout, Hooker stated that despite taking the full two hours and four attempts to make weight (140-pounds), he will still box in the super lightweight division. His promoter, Hearn announced that his next bout will take place in his hometown of Dallas, Texas. If Hooker had his way, it would be a unification bout against any one of the other world champions: Jose Ramirez (WBC), Kiryl Relikh (WBA), or Ivan Baranchyk (IBF).