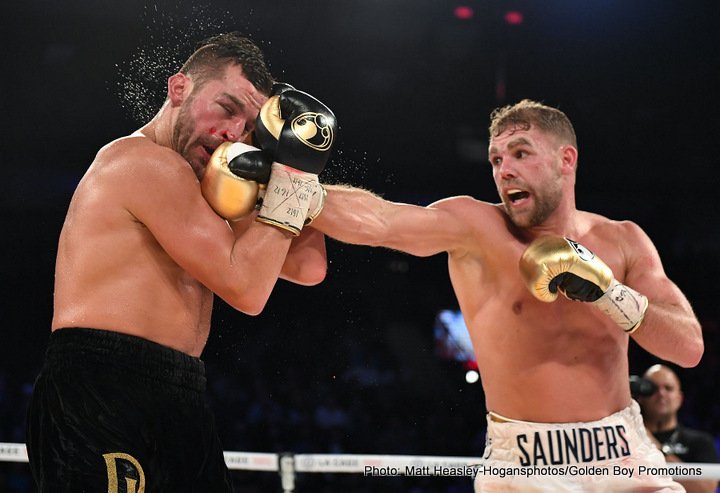 Tonight in Quebec, Canada WBO middleweight king Billy Joe Saunders pretty much shut-out local hero David Lemieux in retaining his belt via lopsided 12 round unanimous decision. Putting on a masterclass, easily the single finest performance of his entire career, the unbeaten southpaw won by commanding scores of 120-108, 118-110 and 117-111.

Saunders is now 26-0(12). Lemieux who looked utterly despondent at the conclusion of what was one hell of a frustrating night for him, falls to 38-4(33).

We witnessed a superb display of boxing skill tonight, as the slippery skills of Saunders were on full display from the first round to the last. Making the dangerous Lemieux miss, miss, miss, Saunders showed great movement and, along with his defensive prowess, plenty of quality combination punching.

Spearing right jabs that landed flush in Lemieux’s face, straight left hands that did likewise and some sharp uppercuts – BJS landed them all. Lemieux had no clue on how to cut the ring off on the defending champion and he was reduced to a wildly swinging target far too many times. Lemieux, though frustrated, did stick in there (Tyson Fury, adding commentary for BoxNation, suggested his corner might pull him out during the second half of the fight of the utterly one-sided contest) and he did enjoy brief spells of success in the sixth and the 11th rounds.

But it was nowhere near enough, and Saunders was content to drop his hands, showboat and continue to sting his man with sharp, fast and stinging blows. Saunders is no big puncher, and it’s a good job for Lemieux that he isn’t. That said, Saunders did appear to hurt Lemieux at times, most notably in the seventh, when the challenger’s nose began to bleed, Lemieux stung by rights and lefts upstairs.

The only hope the former IBF champion had was for Saunders to fade late on and walk onto something. It didn’t happen and Saunders now moves on to even bigger fights; calling out Gennady Golovkin in the post-fight interview as he did.

Lemieux was a quite bitter loser, failing to give Saunders credit for his brilliant performance. Still, make no mistake; admirers of The Sweet Science the world over will applaud tonight’s masterful exhibition of hit and not get hit. Saunders scored one of the finest away wins managed by a British boxer in recent memory. Shades of Joe Calzaghe-Jeff Lacy indeed.