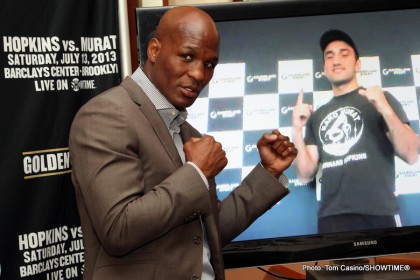 ATLANTIC CITY (August 16, 2013) – IBF Light Heavyweight Champion Bernard “The Executioner” Hopkins will become the oldest fighter in history to make his initial title defense when he faces highest rated light heavyweight challenger Karo Murat in a rescheduled championship event taking place Saturday, October 26 at Boardwalk Hall in Atlantic City. The 12-round title fight, which was postponed from July 13 due to visa issues experienced by Murat, will air live on SHOWTIME® (9 p.m. ET/PT). With those issues cleared up, Murat has his sights set on ending the reign of the 48-year-old future Hall of Famer.

Tickets priced at $300, $150, $75, $50 and $25, not including applicable service charges, go on sale on Monday, August 19 at noon ET, with a special ticket presale on sale now and lasting through Sunday, August 18 at 11:59pm ET. To order tickets during this presale, enter the code: KNOCKOUT. Tickets can be purchased at the Boardwalk Hall Box Office, all Ticketmaster locations, by calling 800-736-1420 or at www.ticketmaster.com.

“I’m happy this fight is back on,” said Hopkins. “Karo Murat is my mandatory and he is coming here to take down this 48-year-old champion, except he’s coming three months late. He gave me extra time to spend time with my family, stay in the gym longer to get ready for this fight. I’m going to be so physically and mentally prepared come October 26, Murat will know he is facing a great champion regardless of my age. I feel like a fighter in my 20s not my 40s.”

“This fight has been a long time coming,” said Murat. “I had some issues with my visa but those are finally solved. I felt ready in July and in October, I will feel even more ready. I’ve been awaiting the chance to fight for the IBF title since late 2011 so three months extra is nothing to me. Bernard Hopkins is 48 years of age – I guess he has enjoyed the summer. Will he be ready for me? I do not know. What I can say is that I will be at my best on October 26. When I am messing up his old bones it will make me a star in an instant.”

“One of the most charismatic and accomplished fighters in recent generations, Bernard Hopkins continues to defy the odds with each record-setting performance,” said Stephen Espinoza, Executive Vice President and General Manager, SHOWTIME Sports. “Not only does he keep winning, but he is doing so in impressive, often dazzling fashion. But make no mistake, this is no showcase fight. Karo Murat is a dangerous opponent. His only loss is to a current world champion in Nathan Cleverly and he holds a win over former World Champion Gabriel Campillo. You can’t underestimate an experienced and hungry fighter like Murat.”

“Like any Bernard Hopkins bout, this October 26 Boardwalk Hall match has drawn considerable buzz throughout the entire region,” said Kevin Ortzman, Senior Vice President and General Manager of Caesars, Bally’s, and Showboat Atlantic City. “The public and the boxing community have waited in anticipation and now they will finally get their wish as the stage is set for Hopkins vs. Murat.”

Nothing can be said about the life and career of Bernard “The Executioner” Hopkins (53-6-2, 32 KO’s) that hasn’t already been written or aired on television, radio, or the internet, but suffice to say that the 48-year-old from Philadelphia has earned the title “legend” for his storied nearly 15-year stay in the fight game. The longest reigning middleweight champion in boxing history, Hopkins went on to reinvent himself as a light heavyweight after turning 40, winning the world title twice. Each time, he set a new record as the oldest fighter to win a major world championship, but as his dominant 12 round win over previously unbeaten Tavoris Cloud in March showed, he’s far from finished, a fact he plans on letting Murat know on October 26.

The number one contender for the IBF light heavyweight title, 29-year-old Karo Murat (25-1-1, 15 KO’s) is on the verge of making history should he defeat Hopkins for his title. A pro since 2006 who has come up the hard way in the fight game, the resident of Kitzingen, Bavaria, Germany has won several regional titles en route to his place among the top 175-pounders in the world. Unbeaten for nearly three years since the lone loss of his career to WBO champion Nathan Cleverly in 2010, Murat’s last two wins have been knockouts of Otis Griffin and Sandro Siproshvili, putting him at the front of the line for his dream fight against a future Hall of Famer.