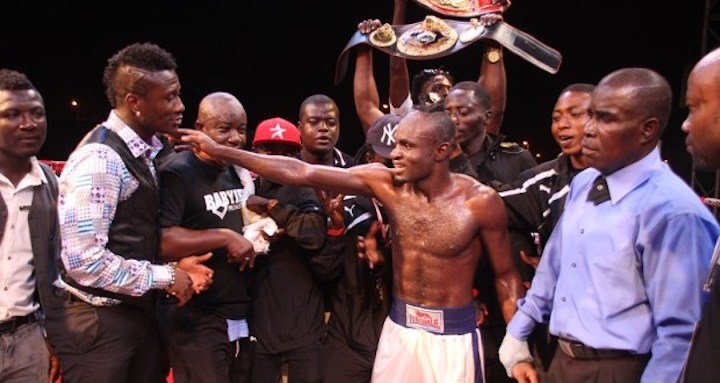 Tagoe, a former holder of a plethora of titles including WBO Africa, IBF intercontinental and WBA Pan-Africa straps, will face the experienced Moses who is coming off a failed bid for the WBO lightweight world title to Raymundo Beltran of Mexico in February this year and previously also held among them, WBO Africa, WBO international and WBA Pan-Africa lightweight belts.

Ghana based BabyJet Promotions who manage and promote Tagoe, until recently also the IBO lightweight world champion, say the show in October will mark a new phase for both Tagoe’s career and their syndicate which has Ghana national soccer team captain, Asamoah Gyan as their owner, bankroller and President and after who their fight nights will now be christened beginning with the October 20 show of course.

A press conference to officially announce the new fight night as well as Tagoe’s biggest test yet against Moses will be held at the famous Bukom Square in the heart of the Bukom hub of Ghanaian boxing on Tuesday August 21, which will also see some of the undercards including loud mouth, Michael ‘One Bullet’ Ansah challenging Ghana lightweight champion, Sheriff ‘One Time’ Quaye also announced.

“We are looking at the brand we are working with and you can’t get any brand in Ghana bigger than Asamoah Gyan, there is no Ghanaian who doesn’t know him. He’s a living legend and if he loves and is investing in boxing, we just have to give him his due,” said Abraham Neequaye, newly appointed CEO of BabyJet Promotions who also doubles as 2nd Vice President of the Ghana Boxing Authority.

In the event, other fights expected to be announced on the undercard of Asamoah Gyan Fight Night 1 include the crunch blockbuster between Kpakpo ‘Punisher’ Allotey and Robert ‘Stopper’ Quaye for the Ghana national super lightweight title, Offei Dodoo versus Ishmael Aryeetey in a much anticipated lightweight contest scheduled for ten rounds as well as Raphael King against Abdul Aziz Quartey in a welterweight 10-rounder.

In addition, The Asamoah Gyan Foundation have also instituted a fund to tap and support boxing talents from an early age, some as low as 6 years whilst ensuring they also embrace education with all their bills taken care of just to give them all the necessary motivation to become great boxers. Six of them already on the roster namely Israel Thompson, David Mensah, Cann Kotey Neequaye, Mathias Ashitey, Ebenezer Ankrah and Gabriel Ashie will thrill fight fans in exhibitions prior to the professional bouts come Asamoah Gyan Fight Night 1 two months hence.

“The boxing ability and potential of this country has never been in doubt but support is what has been lacking and BabyJet Promotions want to invest in these kids to ensure they fulfil their potentials,” Abraham Neequaye explained.

“We want to build them up from a young age in order to equip them with all the tools they need to get to the very top. What we want to do is support them with training kit, technical supervision as well as their education, we will ensure they all go to school in addition to building them up for careers in boxing,” Mr. Neequaye said.