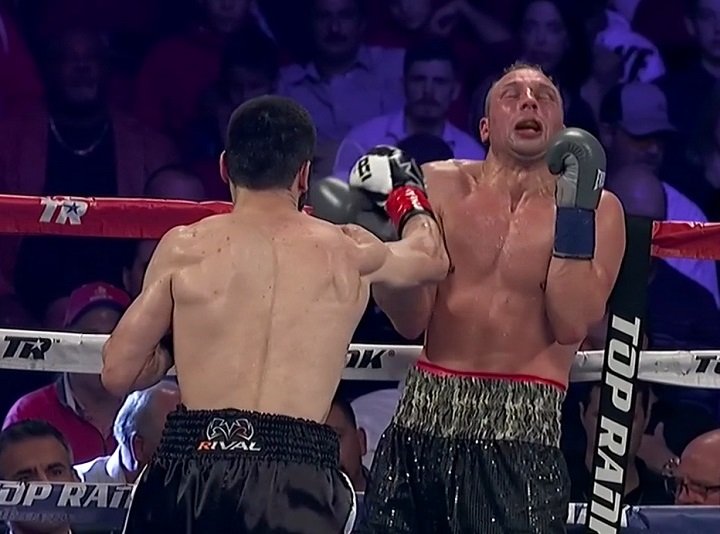 According to a news bit from ESPN.com, respective promoters Eddie Hearn and Joe DeGuardia met yesterday, to discuss a fight between IBF light-heavyweight ruler Artur Beterbiev and challenger Joe Smith Junior, the fight to take place on February 22 or 23 at a venue to be determined; the fight to go out on DAZN. Beterbiev, 13-0(13) gave us a thrilling, off the floor slugfest win last time out, when he stopped a gutsy Callum Smith in the fourth-round (Beterbiev going down himself earlier in the thrilling battle) and fans might get more good action in the Beterbiev-Smith Jr. fight.

Smith Jr, 24-2(20) is best known for being the man who ended the long and storied career of the great Bernard Hopkins. Following up his big upset, first-round stoppage win over Andrezj Fonfara, the New Yorker stopped B-Hop in the eighth-round back in December of 2016, Smith knocking the 50 year old marvel clean out of the ring. Since then, Smith has suffered a broken jaw against Sullivan Barrera (a decision loss) and he has picked up one return win since, this being a quick KO win over Melvin Russell in June of this year.

Can Smith, a tough give-and-take warrior who has heart and power, dethrone the unbeaten banger from Russia? As with any Beterbiev fight, the action could end quickly. Yet to be taken the distance as a pro (Enrico Kolling came close, being KO’d in the 12th and final round last November in Fresno), Beterbiev might be the single hardest puncher in the 175 pound division – and that’s saying something considering the major punching talent that currently occupies the weight division.

Smith Jr can be expected to give it his best, his all, and as Smith proved (along with Jeff Page Jr, in his December 2014 fight with Beterbiev) the Russian slugger can be knocked down. So far, though, no man has really come close to keeping Beterbiev down on the canvas.

Smith Jr will likely be a big underdog here, but the action promises to be fun and fierce while it lasts. Like all fights involving Beterbiev, and Smith come to that. Yes, the light-heavyweight division keeps on ticking, even though we must never forget about Adonis Stevenson; the fallen warrior who is still fighting his way to (we hope) a full recovery from the injuries he sustained in his fight on December 1st.