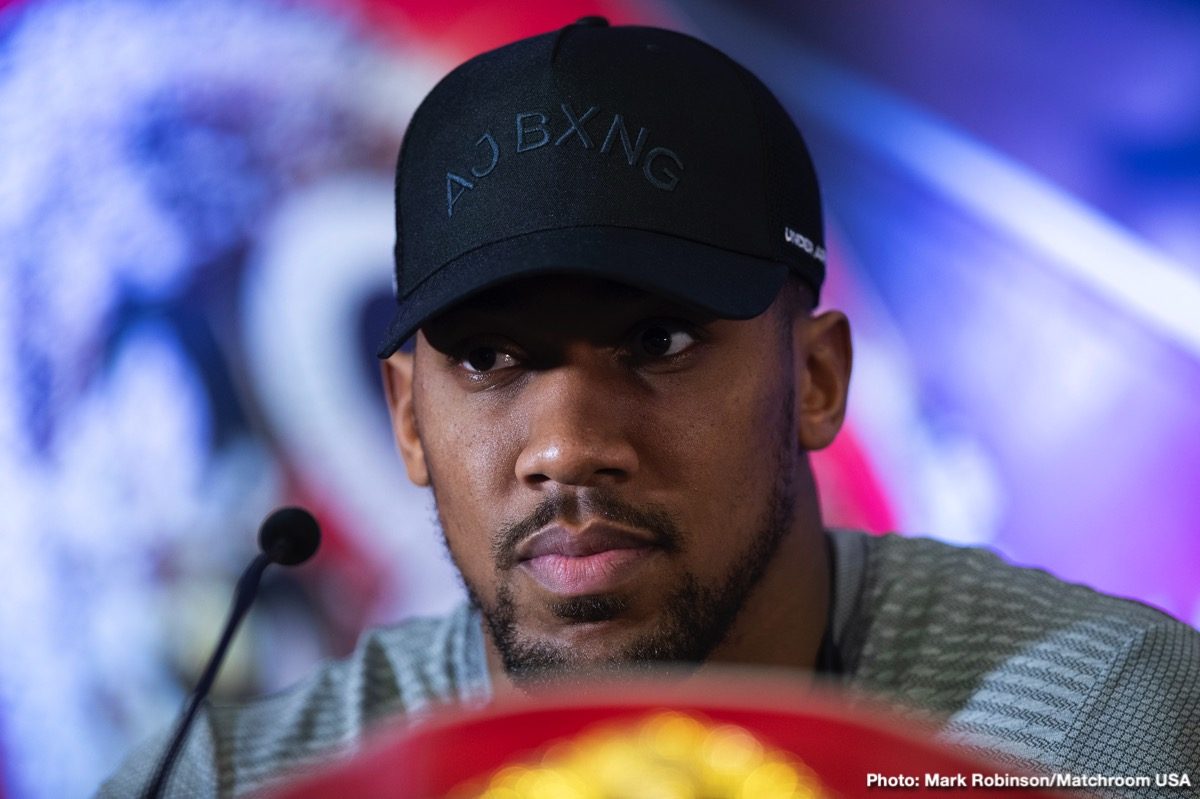 Does unbeaten heavyweight contender Jarrell Miller truly believe Anthony Joshua, who he will be challenging for a handful of world title belts in just over three months, is guilty of having taken illegal substances, PEDs – or is “Big Baby” merely doing anything he can to get under Joshua’s skin, to rattle him? Of course we cannot know for sure, but yesterday, at the second presser to hype the June 1st fight, Miller accused AJ of having taken illegal substances (he didn’t say which ones, nor did he offer any proof) and he stated that he and his team have “busted our balls to get full testing for ten weeks” ahead of the fight.

Miller says there is no way AJ could have bulked up the way he did between winning the Olympics and going pro. The vocal New Yorker also said that Wladimir Klitschko was suspicious of Joshua going into their April 2017 fight. Naturally, Joshua vehemently denies any wrongdoing, insisting that Miller is “talking bull.”

“Nobody could have put on 20lb between winning the Olympics and his first pro fight the way Joshua did without taking something,” Miller said as quoted by The Mail. “We’ve busted our balls to get full testing for ten weeks to make sure he’s clean before June 1st. We’ve covered the bases. Klitschko pushed for testing. In what subjects did Wladimir and Vitali get their PHDs? Sports Medicine. Why did people who know everything about physics of the body want Joshua to test every other week? They pushed on that but settled a bit to make the fight.”

Joshua, who was uncharacteristically aggressive and verbally threatening during the New York presser – where, incidentally, AJ accused Miller of having taken PEDs, back when Miller was a kickboxer – fired back at his challenger and accuser. Joshua says he has “never stuck a needle up my a**e.”

“He’s talking bull,” AJ said. “At the London Olympics I was around 104 kilogrammes and then weighed 107 kilogrammes for my first pro fight the next year. What’s that? Just half a stone (7 pounds) with pro training. What about the eleven years I’ve been boxing since I was 18? I’m now 115 kilo so that’s averaging just one kilo more a year. And that’s down to how hard I work and live. I’m actually cutting weight now so it would be pretty odd if I was doing anything. By the way, all the anti-drugs programmes I’m signed up to cost plenty, too. I have to let them know where I’m going to be every day. I get randomly tested roughly twice a week round the year by VADA. And nothing.”

It’s true Joshua has never once tested for anything and though there will always be those who claim the heavily-muscled fighter “must” be taking something (whilst offering zero proof of course) it could be argued how Joshua is one of the most positive adverts for the sport in terms of winning honestly. Joshua has now vowed to “rearrange” Miller’s face, to “take his soul” in the fight.

If Miller wanted to get Joshua angry, he has certainly succeeded. But who will be made to pay in the ring if Joshua does fight angry come June 1?